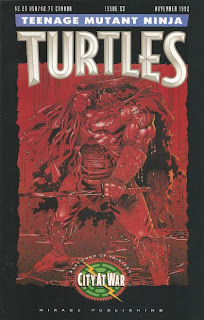 In the woods of Northampton, Splinter meditates and attempts to focus his mind.  Despite his best efforts, though, he cannot concentrate and becomes frustrated.

In LA, April and Robyn return home from the hairdressers.  April feels ridiculous in her new “contemporary” style, but Robyn thinks she looks fine.  Looking around the filthy house, April starts to insist that her sister needs to keep better care of her place.  Robyn resents being told how to live her life and gently tells April to drop it.

At Gabe’s trailer, Casey wakes up from a dream about April to find his girlfriend in the bathroom, vomiting.  Once she’s done, she reveals to Casey that she’s four months pregnant.  She didn’t want to tell him because she was afraid he’d leave.  Casey tells her that he’ll stay, not because he feels sorry for her, but because he wants to.

Over in the hospital, the old man has been removed from his body cast, but is still recovering. 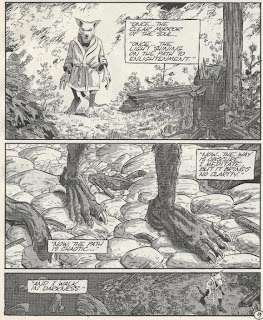 In Northampton, Splinter ponders that his vision has been obscured and meditation no longer brings the clarity it once did.  He feels as though he’s wandering in the dark with no purpose.  Exiting the woods, he finds himself at the entrance of an abandoned industrial complex. 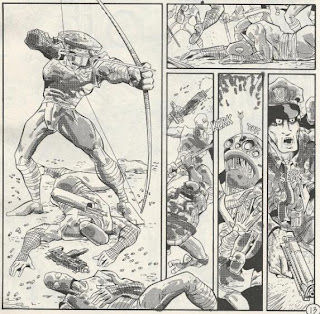 Back in New York City, the Turtles, the Foot, the robots and the police are in the midst of a chaotic battle.  A Foot Elite Guard drops down from the rooftops and begins slaughtering the enemy Foot Soldiers, the police and the robots.  The Turtles try to hold their own, but can’t protect the police officers as the Foot Soldiers gun down their choppers with bazookas.  The cops begin tear-gassing the street and the Elite Guard disappears in a smoke bomb.  Leo gathers his brothers and tells them to disappear into the alley.  Along the way, he sees a young bystander that was killed in the mayhem.

The Turtles regroup in an empty stairwell and try to wrap their heads around what just happened.  Raph is overwhelmed and short for words.  Leo tells his brothers that even though they found the Foot like they’d been trying to all these weeks, they accomplished absolutely nothing.  Basically, they’re in way over their heads. 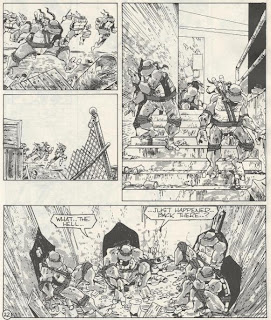 In Tokyo, at the HQ of the Japanese branch of the Foot, an advisor tells his superior that the New York situation has reached crisis proportions, showing her news footage of the chaos in the streets.  The woman tells her advisor that it is time to act.

The Turtles finally find the trouble they’ve been looking for and it’s not what they had in mind at all.  In the past, their solution to battling the Foot has always been simple: Kill the Shredder.  The Shredder’s dead, the Foot are going crazy… Now what do they do?  The Turtles set off a powder keg when they defeated Shredder for the final time and they aren’t equipped with the means to clean up their own mess.  This issue is a humbling experience for them, to say the least.

It’s always one of those annoying clichés of movies and cartoons and comic books; that if you kill the leader, the bad guys are all done for as a whole.  Kill the Emperor and suddenly the Galactic Empire is defeated (and shut up about your EU).  Defeat the Red Skull and HYDRA is a goner.  Take down Cobra Commander and Cobra is no more.  It’s as bad as having the secret headquarters self destruct just because you’ve beaten the boss level.

Here, the Turtles learn that reality isn’t so simple.

I waxed on last time about how the Mirage Turtles aren’t “heroes” or “crimefighters”, and this story illustrates a reason why they can’t be.  The Turtles killed the Shredder not because he was assassinating people or running protection rackets, but because the Turtles owed a debt of honor to Master Yoshi.  So far as they’re concerned, killing the Shredder restored their sensei’s honor and cleared their debt.  They go back to take down the Foot in “City at War” not because they *have* to, but because they feel morally obligated to clean up after themselves.  And their attempts at doing that are a total disaster.  They don’t know where to look for the Foot, they don’t know what to do when they find the Foot… They’re useless in this situation.  And as Leo points out, they can’t even protect innocent bystanders or the police.

If the Mirage Turtles *were* superheroes, they’d be the worst ones ever.

As for everyone else, Casey’s decided to take responsibility and help Gabe with her upcoming child, Splinter is dealing with his newfound obsolescence, Karai’s about to roll up into New York and get shit together, and April’s whining about her hair and a messy living room.

Goddammit, April.  Can you even TRY to be interesting?

As for the big fight, it’s a dozen pages of pure action and Lawson lays it out like a champ.  The energy flows through the panels and the perspectives shift naturally to set up the sequences and direct your eyes where they need to be.  My favorite bit is when the Foot Soldier on the roof with the bazooka gets gunned down by the police.  The way the gunshots trail along the ledge of the building before they hit him, then he keels over and his blood spatters like raindrops down on the action below.  It’s so hectic and chaotic, but the layouts lead you through the action by the hand so the reading is intuitive.  Really amazing sequence and one of the best fights in the whole book.

Grade: A (as in, “And for the record, Robyn’s cat is named Coolbeans.  That’s the most interesting part of April’s segment in this issue”.)
Posted by TMNT Entity at 11:47 AM