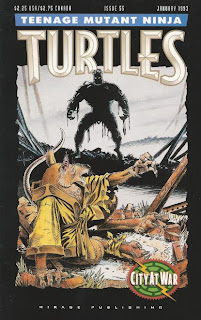 After her personal jet lands in New York, Karai takes a private helicopter to the rooftop of her skyscraper.  There, she stands and looks upon New York City. 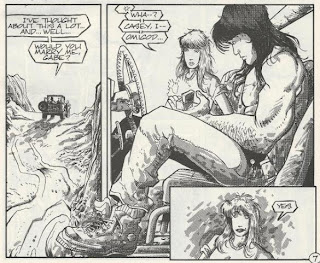 In Colorado, Casey and Gabe watch the sun set over the mountains.  They discuss Gabe’s pregnancy (the the baby needs as much positive energy as possible) and Casey finally asks Gabe to marry him.  Gabe agrees immediately.

In LA, April is on a date with a sleazy guy from her office.  He places a hand on her leg so she places a cup of hot coffee in his lap.  On her way home, she ponder how lousy her life has gotten, then thinks to herself how “trendy” it is in LA to have a crappy life.

In the abandoned smokestack, a voice rouses Splinter back to consciousness.  The shadowy figure of a man lurks in the corner, but refuses to identify himself or help Splinter out of peril.  Splinter asks for food, but the figure tells him that sustenance is all around, though he hasn’t the means to grasp it.  Splinter asks if the figure is Death.  The figure denies being Death, but says that he knows Death.

In New York City, Leo urges his reluctant brothers to leave the water tower and go on a rooftop practice run (elsewhere, the old man looks out his hospital window).  Shortly into the run, the already on edge Raph steps in some dog poop and decides to storm off back to the tower.  Alone, he’s ambushed by a Foot Elite Guard, who begins slashing him with a tanto blade.  Eventually, Raph sticks the Elite Guard in the gut with his sai and takes him down. 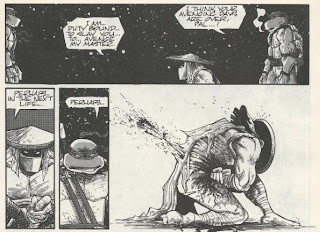 The other Turtles, hearing the struggle, join Raph.  Raph recognizes the attacker from the street massacre while Leo immediately identifies him as one of the Shredder’s personal guards.  The Elite Guard recognizes Leo, too, as the one who killed his master.  Though honor-bound to avenge his master’s death, the Elite Guard realizes he cannot win this battle, so he drives the sai all the way through his stomach and kills himself. 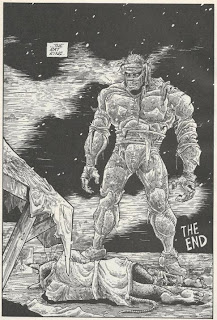 Oh shit, the Rat King!  His return was one of those pleasant surprises when reading through “City at War” for the first time, as I had always thought he was just a one-shot villain in Mirage.  Then, all of a sudden, he makes a grand comeback and in a storyline that really fleshes out his character and motivation.

The development of the Rat King within the Mirage series is a fascinating result of cross-pollination between the different Ninja Turtles media during the ‘90s.  When he originally appeared in 1988 in the pages of Tales of the TMNT, he didn’t have a proper name; “the rat king” was only one of many monikers he adopted in his first appearance (as referenced in this issue) and he actually identified himself as “the monster” more frequently than any other.  Even the Palladium TMNT & Other StrangenessRPG sourcebook called him “Monster” in their profile for lack of a better name.

“The Rat King” was first applied to him as an official identity by the Playmates toyline and the Fred Wolf animated series.  The toyline was also the first piece of TMNT media to brand his allegiance as “unaligned”; neither hero nor villain.  The Fred Wolf cartoon only played with that idea in a single episode, but his brief 1990 appearance in Archie’s TMNTAdventures #11 expanded it a bit.  And here, the Mirage comic picks that trait up and runs with it, as he cryptically guides Splinter’s survival for the next several issues.

Far too often, everyone just assumes that the guys at Mirage hated the Fred Wolf cartoon and the Playmates toyline, but fact of the matter is that the Mirage staff helped develop both.  Toys were often designed by guys like Talbot, Brown, Dooney and Lawson, and of course the Fred Wolf cartoon adapted all their ideas whenever they incorporated a Mirage character or a Playmates character created by the Mirage staff.  And fair is fair, the Mirage guys clearly weren’t repulsed by the idea of bringing in interesting concepts from the toyline and cartoon (though it wasn’t very often).  This Rat King, so collected and mysterious with a grim regality to his manner, shares more in common with the Rat King that appeared in Archie’s TMNT Adventures than the hallucinating maniac that appeared in Mirage’s Tales of the TMNT.

As for the other storylines, we get a great one-on-one between the Elite Guard and Raph.  Though Raph triumphs, it’s a brutal test of skill and ferocity that takes great strides to show how tough the Foot Elite REALLY are.  Slaughtering a bunch of Foot Soldiers is easy, but being able to go toe-to-toe with Raph for five pages and draw plenty of blood is something else entirely.

Casey’s proposal to Gabrielle was done very sweetly.  I remember the episode of the loathsome 4Kids series, “Back to the Sewers”, where he proposes to April in an overly comical fashion (bumbling and knocking over a rowboat and acting like an imbecile).  Here, Casey is nervous and shy and unconfident about popping the question, because he’s never loved anyone as much as he loves Gabe, and the proposal is perfectly in character without magnifying Casey’s awkwardness for corny comedy.

As for April, well, she’s gone from “boring” to “bitch” in one fell swoop.  And I don’t mean that because she scalded that creep’s dick.  As she walks down the street and states that “it’s trendy in LA to have a crappy life”, she makes that remark right as she obliviously passes by a homeless man with a change bucket that says “help” on it.  I guess he’s just trying to be trendy?

It’s not a bad scene, though!  As a matter of fact, it really shows how the change of scenery and lifestyle has begun to alter April; going from kindly den mother to callous ice queen.  April’s  arc seems to be a serious condemnation of Los Angeles and the people who live there; just by dwelling within the city limits, even the best of humanity is transformed into a selfish, superficial scumbag.  The third TMNT live-action movie was on the way and Eastman and Laird had been dealing with a lot of Hollywood types for years by this point, so I often wonder if this was intended to be their commentary on what they interpreted as typical LA citizens.

Though I kind of have to laugh at the idea of a couple of New Yorkers casting stones at another city for being populated by rude, uncaring, obnoxious pricks.  Pot and kettle and all that.

Grade: A (as in, “April seems to have grown into a double-D cup for just this one issue.  Lawson clearly needed a cold shower at the time”.)
Posted by TMNT Entity at 11:36 AM