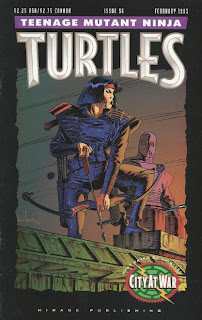 At her programming job in LA, April is feeling restless.  She goes to her boss and states that the project he currently has her assigned to is a waste of time.  Her boss sends her back to her desk and tells her to finish it.  April sits back down, frustrated and angry. 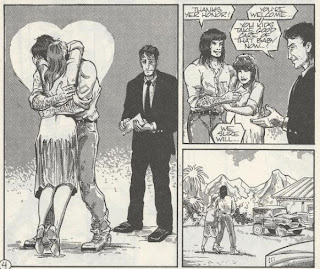 At a Justice of the Peace's office in Colorado, Casey and Gabe tie the knot.  Returning to their trailer, Casey has decorated the whole place in a tropical island theme to serve as their honeymoon.  Gabe is thrilled with the gesture.

Inside the abandoned smokestack in Northampton, Splinter has been surviving off melted snow for water, though he needs food soon or he’ll perish.  The Rat King urges him to eat the rats that scurry about his reach, claiming that once Splinter dies, the rats will have no second thoughts about eating his remains.  Splinter refuses, believing himself to be above something as reprehensible as cannibalism.  The Rat King tells Splinter that he is making a mistake by trying to shed his animal nature in search of spiritual perfection.

Back in LA, April returns home to Robyn’s place in a foul mood.  She chides Robyn again for being messy and irresponsible and the two get into an argument.  Robyn reminds April that their mother is dead and that April is not their father. 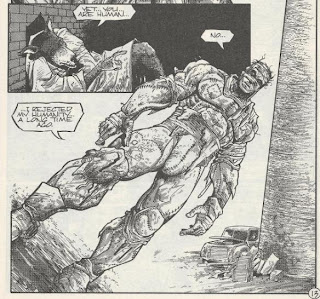 In the smokestack, Splinter grabs a rat, but lets it go; still unable to do the deed.  The Rat King calls Splinter a weak master for his students, but Splinter believes it better to die than give in.  Splinter asks if the Rat King is human and the Rat King reveals that he rejected his humanity long ago.

In New York, Karai and the Foot Clan have tracked the Turtles (who have grown sloppy) back to their water tower.  Karai has assembled a unit of Foot Soldiers from the remains of the New York branch that are lost and looking for leadership.  They plant a bomb beneath the tower, setting it on fire and sending the Turtles fleeing onto the rooftop.  The Turtles, caught totally unawares, struggle to battle the Foot Soldiers (while in the hospital, the old man lays quietly in his bed).

Karai orders her Foot Soldiers to take the Turtles alive and they break out their tasers.  The Foot Soldiers get Leo, zapping him unconscious.  Though they’re loathe to do it, the other Turtles retreat before they’re caught, too.  As they escape, Karai sends an arrow their way with a note attached.  The note contains a phone number. 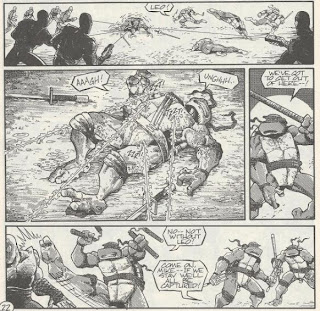 At Robyn’s place, April receives a phone call from the Empire Estates Nursing Home.  As it turns out, their father passed away that morning.

*Tales of the TMNT (Vol. 2) #46 takes place in-between two story arcs from this issue.  The issue occurs after April's father dies but before Karai destroys the water tower (remember that the story arcs in "City at War" do not all happen concurrently).

We finally get to see Karai in action for the first time and in one fell swoop she defeats Leonardo and sends the other Turtles into retreat.  Not a bad first impression, all things considered.

While a knee-jerk reaction might be that the Turtles went down a little too easy, the fact of the matter is that they had really “let themselves go”.  The Foot Soldiers make the observation at the start of the issue for convenience’s sake, but if you’ve been reading “City at War” sequentially, that fact is very much true.  They’re lost and bored and have to be convinced to go on practice runs to keep in shape while they’d rather just sit around the water tower and loaf.  Could the Turtles have taken the Foot if they were in pique condition?  Most assuredly, but getting at the TMNT once they grew weak and let their guards down was a part of Karai’s plan (she had to let the situation in New York “ripen” before she’d intervene, as you recall).  This is her first real show of hand in the comic and already Karai has copied the greatest success of the Shredder and in only a fraction of the time, effort and manpower.

Meanwhile, the Rat King is really putting Splinter through the psychological wringer.  The point he seems to be making is that Splinter has endeavored to become more man than rat and has forgotten or refused the animalistic skills that make him truly unique.  Meditation and study and achieving higher planes of consciousness aren’t going to get Splinter through this crisis.  It’s a great example of “turnabout is fair play”, as the master becomes the student and struggles with a lesson he doesn’t understand or doesn’t WANT to understand.  If you've read TMNT (Vol. 1) #37, Splinter dispatches the Turtles to go on a spiritual mission to connect with their reptilian heritage and understand the benefits of their humble animal origins.  In this storyline, the Rat King is essentially forcing the very same lesson upon Splinter… and Splinter isn’t taking the role reversal very well.

And also in this issue, Casey and Gabe get married and April’s frustrations with a bland life are starting to get under her skin.  It’s a great contrast, as Casey, the bar-brawling adrenaline junkie, is finding peace and joy in a normal life, while April, the milquetoast den mother, is going nuts with the banality of average workday routines.  It’s certainly some fascinating character exploration, as both April and Casey act counter to what we’d expect from them when thrust into essentially the same circumstances.  Deep down, April craves the excitement of an extraordinary life, while Casey longs for the comfort of a modest family life.

If it hasn’t become apparent, in every arc of “City at War”, the characters are turned completely on their heads.  The Turtles let their skills lax and erode to the point of becoming useless deadweight in a serious situation.  Splinter is humbled by a test he refuses to pass due to pride and arrogance.  April discovers that being normal totally sucks while Casey finds that a normal lifestyle has its own rewards.  We get to see “Bizarro” versions of each character without having to leave this universe for a negative one, and yet the transformations are completely natural within the tapestry of the “City at War” storyline.  A big bravo on that.

Grade: B+ (as in, “But I will never be able to purge the image of the Rat King’s massive codpiece from my nightmares”.)
Posted by TMNT Entity at 6:50 PM