You're in the Army Now 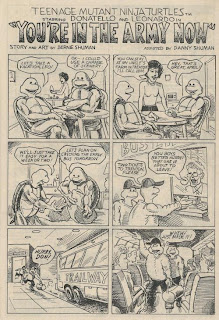 “You’re in the Army Now”

Lounging around April’s apartment, Leo and Don figure they’re due for a vacation.  April suggests they visit her uncle in Trenton and they jump at the chance.  Unfortunately, they arrive at the bus depot late and have to chase down their ride.  They soon find that they’ve hopped onto the wrong bus, as they’re dropped off at Fort Dix; an army boot camp facility! 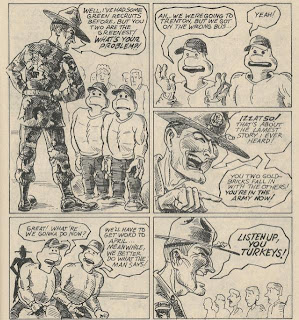 Leo and Don try to explain the mix-up to Sgt. Heartbreak, but he figures them for a couple of goldbricks trying to weasel out of their enlistment.  He sends them to get their haircuts, uniforms and medical exams and the Turtles reluctantly comply.

4am the next morning, boot camp begins in earnest and Leo and Don are put through the works: 4-mile marches, 20-mile hikes, tear gas chamber, obstacle course, etc.  Having trained in ninjutsu their whole lives, they find Heartbreak’s regimen a breeze, but feel he’s being too hard on some of the smaller recruits.  Next up is one-on-one with the pugil sticks and Heartbreak challenges any private to take him on.  Seeing a chance to get some payback, Don accepts and quickly knocks Heartbreak off his feet.  Rather than get upset, however, Heartbreak is impressed.  When Lt. Jones calls him in to warn him of a terrorist threat to their post ammo dump, Heartbreak suggests putting his two best recruits, privates “Atello” and “Nardo”, on guard duty. 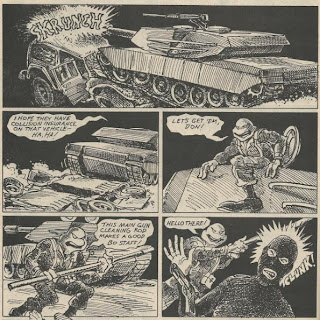 Leo and Don stand a lonely vigil outside the ammo dump late into the night and, as predicted, a van full of terrorists open fire.  The Turtles take cover as the terrorists break into the ammo dump and begin looting the goodies.  Don has a bright idea and the Turtles commandeer a nearby tank.  Don rolls over the terrorists’ escape van then he and Leo take the villains out with hand-to-hand combat.  Heartbreak arrives on the scene and sees that “Nardo” and “Atello” have everything under control.  He is so thrilled, he decides to put them up for citation.

Later, April receives a letter from Leo and Don explaining their predicament.  Mikey and Raph join her on a trip to Fort Dix to straighten things out.  The General gladly offers Leo and Don honorable discharges and the Turtles leave Fort Dix with April and their brothers.  Jokingly, Raph and Mike suggest they take their next vacation at Parris Island.

*To my knowledge, this story has never been reprinted.

*Parris Island is home to a Marine Corps recruitment center, just in case that stupid parting joke was lost on anybody.

I was under the impression that Turtle Soup was meant to showcase *short* TMNT comics.  At 14 pages, “You’re in the Army Now” is nearly the length of a full issue and is far and away the longest story in this anthology.  The gag overstays its welcome by at least 10 of those 14 pages and the damn thing just keeps going and going and going…

So far as the basic premise of “the Turtles in boot camp” goes, expect absolutely zero surprises from this one.  The Turtles run laps, do obstacle courses and even save the day by appropriating a tank because sure, nobody saw that clever climax coming.  About the only cliché they don’t succumb to is a potato peeling scene, but I’m sure if Bernie Shuman had been given another 10 pages we’d have gotten it.

Impressively, “You’re in the Army Now” manages to avoid the ole “boy, this army life sure is rough!  I tell ya!” bit.  The Turtles, having trained in far worse conditions since childhood, take to Boot Camp like a fish to water and breeze through all the exercises.  While Shuman avoids such a hackneyed scenario, he also avoids establishing any sort of conflict for most of the damn story.  The terrorists don’t enter the scene until page 9, so prior to that over half the damn comic is nothing but the Turtles shrugging their shoulders and going “meh” at the various torments of Army life.

And there aren’t any jokes, either.  It’s just a damn boring comic that goes on FOREVER.  I’ve never had 14 pages take so long to get through in my life, and I’ve read Chris Claremont.

Most of the lesser installments in the first volume of Turtle Soup suffer from bad art or bad jokes, but they at least have the decency to end it quickly.  You’ll find no such mercy in “You’re in the Army Now”.

Grade: F (as in, “For the sake of keeping the clichés going, I can only assume that Sgt. Heartbreak’s dialogue was intended to be read in R. Lee Ermy’s voice”.)
Posted by TMNT Entity at 7:46 PM