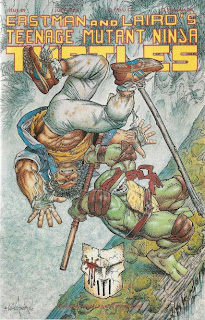 At her beachfront home in California, Robyn O’Neil receives a phone call from her sister, April.  April tells her all about a guy she met the previous week (the motorcycle guy), but is afraid to take him home and let him into her life.  Robyn tries to give her some advice and offers her the chance to come visit her in California.

After the phone call is over, April sits down and unloads her feelings onto Splinter.  She tells Splinter that she wants to live a normal life, but can’t, because she can never invite anyone home or tell them about what goes on in her life due to the Turtles.  She asks Splinter what she should do and he answers.  “Leave.”

In his room, Casey wakes up with a killer hangover.  He’s been drinking heavily ever since he killed a teenager in self defense.  After puking in the john and telling April to leave him alone, Casey grabs a beer and stumbles off into the woods.  Confused, angry and full of self-loathing, Casey wanders around until he bumps into Donatello, sitting on a fallen tree spanning a stream.  Casey asks Don what he’s doing and Don tells Casey about Chaos Theory and his attempts to understand the fractal structure of natural patterns by observing the ripples in the water. 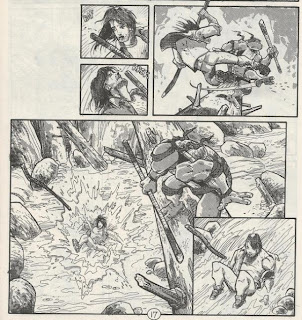 Casey accuses Don of trying to talk over his head and acting like he’s smarter than everybody else.  Don tries to reason with Casey, seeing that he’s drunk, but Casey won't listen.  Eventually, Don starts to lose his temper and tells Casey to go away.  Casey grabs a branch and challenges Don to a fight.  Don refuses and attempts to ignore him, but Casey continues to poke and prod Donatello, not letting him by unless they fight.  Donatello eventually has enough and with a few swift movements knocks Casey off the fallen tree and into the shallow stream.  Casey glares up at Don in humiliation.

In the barn, Mike plays ref while Leo and Raph spar.  As they go at it, Raph is suddenly distracted by a news report on the radio describing an escalating power struggle between Asian gang factions in New York.  Leo uses the distraction to beat Raph, but Raph simply stands up and walks off. 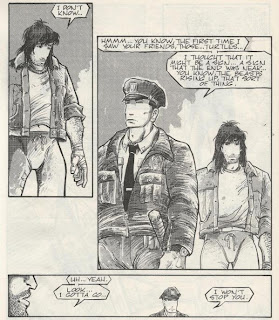 Meanwhile, Casey returns to the Central Street playground where he killed the teenager the week before.  He’s met by Nobody in his police officer guise.  Nobody tells Casey that the two kids that ran away turned themselves in and their stories matched Casey’s, thus convincing Nobody of Casey’s self defense plea.  Regardless, Nobody doesn’t care for Casey, though he admits that the justice system is in such disrepair that even if he had been arrested, innocent or guilty, it would have made no difference.  Nobody tells Casey that he sees society as yin and yang: the more humanity progresses, the more it simultaneously regresses.  In fact, he says that when he first met the Turtles, he thought they were a sign of the End Times ("beasts rising up", etc.).  Casey tells Nobody that he has to go and Nobody says he won't try to stop him.

*This issue also included a bonus Michelangelo pin-up by Eric Talbot (taken from an unpublished story by Eastman and Talbot, according to the notes).

The second half of “Shades of Gray” is some pretty heavy storytelling, as Casey essentially reaches his lowest point.  There’s a lot to talk about in this story, but what I really want to focus on is the interaction between Casey and Don.

Despite what the first live-action TMNT movie insisted, Casey and Don aren’t close chums and kindred spirits.  In fact, as is pointed out during their confrontation, they’ve hardly ever spoken to each other in the Mirage series or shared any common interests.  And they basically admit to one another that they’ve *never* liked each other, merely tolerating one another's presence out of respect for their mutual friends and family.  I think in some small or large way, we can all identify with that.  Who hasn’t had at least one individual in their social circle whom they’ve outwardly disliked, but endured because they’re “a friend of a friend”?  In this instance, however, we see what happens when the other friends who offer that buffer zone between them are eliminated and the two conflicting personalities are left alone together.  And also, alcohol is involved.

For Casey, he’s clearly trying to drown his guilt with the two things he loves best: drinking and fighting.  He gets wasted first thing in the morning then goes to pick a fight with Don, who was just minding his own business.  As I mentioned in my review of the previous issue, the drinking and the fighting is what has always made Casey a “badass”, or at least intended to make him such.  The guy slams a Coors with Raph and then busts some heads for entertainment, all before the sun comes up.  But here’s the other side of the coin:  Drinking to the point of alcoholism and alienating your friends and loved ones...  Picking fights with anybody and everybody, potentially creating rifts that can never be repaired...  This is the stuff you normally don’t see when reading about hard-drinking, bar-brawling “badasses”.

And even more sobering is the fact that Donatello, the egghead, the intellectual, the milquetoast square; HE’S the one to hand Casey his ass and put him in his place.  It’s a total reversal of what audiences are trained to perceive as “cool”.  All of a sudden, we see the tough guy for what HE really is, an alcohol dependant bully, and we see the nerd for what HE really is, a rational and even-tempered guy that can only take so much.

As for Casey, well, when you hit your ultimate low, that just means there’s only one direction left.  So hey, look on the bright side.

April’s storyline doesn’t get as much page space, but it’s one of the other major arcs initiated in “Shades of Gray”.  We see just how far apart she and Casey have drifted (whatever potential romance they might have shared has vanished, now) and, at the very least, she gives a solid reason for wanting a “normal” life.  The Turtles have basically “trapped” her to the point where she can never invite friends or family back to her home, meet new people or tell anybody about what she does.  I can imagine how after a few years, once the novelty of knowing mutant ninja animals has worn off, such a predicament would become suffocating and oppressive.  We also get to meet Robyn for the first time, and the fact that it’s taken almost 50 issues to show us that April does indeed HAVE other members of her family just further proves her point.  Her friendship with the Turtles has isolated her from everyone she ever cared about before she met them.

It’s about the most interesting April’s ever going to get in the Mirage series, I’m sorry to say.  Her arc during “City at War” won’t be the most enthralling, but it’ll at least give her something to do.  And for Mirage April, “something to do” doesn’t come very often.

Grade: A (as in, “Although Splinter was kinda being a dick.  Maybe April got to him before he’d had his morning coffee”.)
Posted by TMNT Entity at 1:28 PM