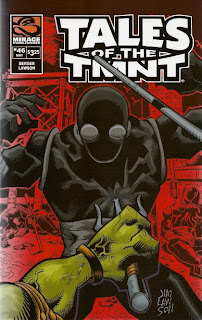 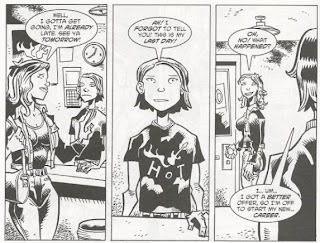 April’s just returned home to New York and decides to stop by her favorite coffee shop, the Daily Buzz.  Inside, she orders the usual from her favorite barista, Tomi.  Tomi’s little brother, Jiro, idolizes his sibling and wants to grow up to be as good as he is with the guitar.  Tomi tells Jiro he won’t get any more lessons if he misses school and sends the kid on his way.  April asks Tomi how things have been since his father was killed by a local gang and Tomi admits that times have been tough.  However, he says that he’s found a new job and today is his last day as a barista.  April wishes Tomi luck and heads on her way.

At the water tower HQ, Donatello tells his brothers that the tracking sensors he put in place a while ago are getting signals from Foot Clan activity.  The Turtles decide to head to the source of the signals.  Raph wants some serious action, but Leo reminds him that they’re only on a recon mission.

Tomi stops by his mother’s place and tells her that he’s going to need his father’s equipment for the initiation.  Tomi’s mother is against her son following in his father’s footsteps and urges him to give up the “family tradition” and focus on his music.  Tomi promises her that he’ll be alright.

On a rooftop, the Turtles have the Foot’s meeting place scoped out and Donatello labors to set up his surveillance gear.  Raph, bored, is getting anxious and agitated.

Before his brother leaves, Jiro asks if Tomi can tell him all about the cool initiation when he gets back and Tomi promises to let him know in the morning.  Tomi dons a Foot Soldier uniform and heads to the rooftop where the initiation is taking place.  The Foot Soldier in charge points to the Turtles on another rooftop, unaware of them, and says that their initiation will be an ambush on their mutant foes. 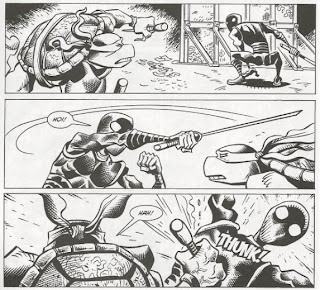 On the other rooftop, Don is listening in on the Foot meeting and trying to translate the Japanese.  He gets as far as “initiation” when the Foot Soldiers launch their sneak attack.  The battle between the Turtles and the Foot goes as it usually does, with the Turtles making quips and knocking the ninja off their feet.  Tomi is hesitant to strike with his sword, but after a few commands from his superior, decides to take Raph on.  Raph effortlessly dodges Tomi’s attack and then sticks him in the gut with his sai.  More Foot Soldiers arrive and the Turtles retreat with a well-placed smoke bomb.

The Foot take an accounting and find only one casualty: Tomi.  The Foot Soldier in charge tells the new recruits that they have passed their initiation and that they will one day achieve vengeance for their fallen comrade. 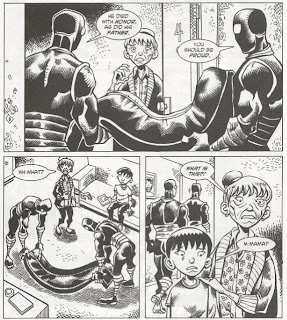 At her apartment the next morning, Tomi’s mother answers a knock at the door and the Foot Soldiers deliver Tomi’s corpse.  They tell her that he died with honor just as his father had.  Tomi’s mother breaks down crying while Jiro promises her that he will get the guys who murdered his brother.

*This issue takes place during TMNT (Vol. 1) #56.  It occurs after April’s storyline (where her father dies and she returns to New York) but before the Turtles’ storyline (where Karai destroys the water tower).

*For those who have read TMNT (Vol. 1) #56, you likely recall that the water tower was destroyed before April found out her dad had died.  Keep in mind that, as illustrated in TMNT (Vol. 1) #51, the ongoing storylines running throughout “City at War” do not happen concurrently.  It seems counterintuitive to place the story during TMNT #56, I know, but it’s the only way April’s and the TMNT’s timelines can intersect for the events of this issue to take place.

*This issue also contained a bonus pin-up, “The Hole” by Mark Martin.

“Temps” is a story with a concept and a moral I could really applaud if, well, it hadn’t been published in a Teenage Mutant Ninja Turtles comic.

Essentially, the lesson learned in this issue is “an eye for an eye leaves everyone blind”; that vengeance and honor killings are a vicious cycle that inevitably leads to self-destruction.  Giving an identity and a righteous motivation to a faceless Foot Soldier is a great way to get that message across, as it reminds us that these disposable henchmen all have families who love them and presumably an unfortunate string of circumstances that lead them to join the Foot.  I love the way the ending battle is played, as the Turtles deliver their usual droll quips and knock down the Foot Soldiers with minimal effort.  It’s one thing to kill a guy, but it’s another to laugh in his face as you do it…  Especially after we just watched him kiss his mother good bye and promise to see his little brother in the morning.  Yeah, the Turtles are killing in self defense, but do they have to be such dicks about it?

The problem I have with the moral is that the entire origin of the TMNT is founded on vengeance and honor killings.  “Temps” tries to show us the fruitlessness of revenge, but we’re more frequently encouraged to root for the Turtles when they go on an honor killing spree.  They killed Oroku Saki to defend the honor of a man they never even knew because their master wanted vengeance.  But Oroku Saki killed Hamato Yoshi because he wanted revenge for the death of his older brother.  So what makes the TMNT’s honor killing more righteous than Oroku Saki’s?  And what makes their blood debt more reasonable than Tomi’s?  He wants to restore the honor of his fallen father by carrying on in his footsteps, after all.

The difference is that when the Turtles do it, everything works out because they’re the protagonists.  But when Tomi or Oroku Saki or anybody else does it, they’re wrong and on the path of self-destruction.  So is the lesson “don’t seek vengeance unless you’re absolutely sure that you deserve it more than the other guy?”  EVERYBODY who seeks revenge feels a righteous sense of entitlement; that they deserve it.  The only reason the Turtles get away with it is because they’re the stars of the comic book and they have plot armor.

Much of the set up for Tomi also reads as being pretty labored.  The exposition at the coffee shop is rough, as Tomi basically gives us the Reader’s Digest version of his life story as April feeds him awkward solicitations for more back story.  And speaking of April, I really don’t think she needed to be in this issue.  I suppose having the Turtles slay an acquaintance of a friend of theirs adds another layer to the tragedy, but it felt like Berger had to jump through some narrative hoops to shoehorn her into the story.  I think we could have gotten a more sincere look at Tomi’s family life if we’d just followed him around for an afternoon as he interacts with his mom and brother.  I’d have preferred that over Tomi standing in a coffee shop TELLING us how he interacts with his mom and brother.

Berger would make a second attempt at telling this kind of story, and do a much better job of it, in Tales of the TMNT (Vol. 2)#65.  In that one, a Foot Mystic is at the end of his rope and essentially only going after the Turtles to save the lives of his family held hostage.  It forgoes the stilted morality play about the cycle of vengeance while still giving us a tragic and insightful look into the life of a Foot lackey.  Mirage TMNT stories that condemn honor killings and blood debts just don’t work given that the entire series rests on the foundation of a successful act of vengeance.  Tales of the TMNT (Vol. 2) #6 is an even more frustrating example of this, as the Turtles themselves try to take the high ground and explain why honor killing is wrong and it’s a lot of black pots and kettles.