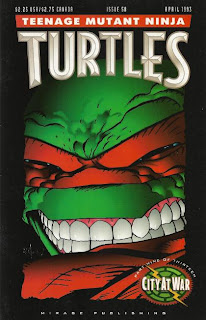 In a park in Colorado, Casey and Gabe are going for a leisurely stroll.  Gabe is relieved that she’s finally given birth and now she and Casey can raise their beautiful child together.  Suddenly, a hulking version of Casey clad in a black hockey mask charges onto the scene, strikes Casey down with a hockey stick and slings Gabe over his shoulder.  The evil Casey throws her into his Chevy and then drives off before Casey can save her.  Casey hears a sound and it’s Gabe, sobbing on a park bench.  Casey runs to her, but when she lifts her head, she’s actually April. 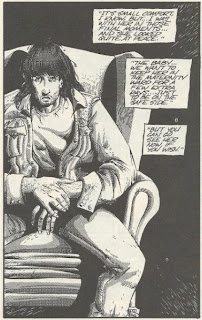 Casey awakens from his dream in a hospital waiting room.  He’s approached by Dr. Brenner who asks to speak with him in his office.  Dr. Brenner tells Casey that there were complications while Gabe went into labor.  She began hemorrhaging and after eight hours of labor, the internal bleeding took its toll.  Gabe passed away while giving birth.  Dr. Brenner tells Casey that they were able to save the baby with a c-section and Casey is the father of a little girl.  Dr. Brenner leaves Casey to have some privacy in his office.  Sullenly, Casey says nothing and just stares out the window.

In an abandoned building in New York, the Turtles discuss the truce Karai has proposed.  Raph thinks it’s a potential double-cross while Don and Mike think that joining with the Foot would go against everything Splinter ever taught them.  Leo asks them to think about what exactly it was that Splinter taught them.  Since they were children, Splinter raised them for the purpose of exacting vengeance against the Foot.  Splinter’s blood debt has wound up casting a shadow over not only their lives, but April’s and Casey’s as well.  Regardless of Splinter’s approval, Leo sees this truce as a chance to live their lives freely from their master’s blood debt.  Don reminds Leo that the Elite Guard have split from the Foot Clan and would still hound them for vengeance, regardless of any truce.  Leo says Karai may be able to help with that and they should go see her now.

In the abandoned smokestack in Northampton, the Rat King notices that Splinter has begun to get his energy and health back.  Splinter notices, too, and wonders how long he has been trapped.  The Rat King tells him two months.  He also says that he knew Splinter would one day come and that his mission was to break through the walls of Splinter’s deeply ingrained beliefs and teach him a valuable lesson.  Splinter accepts that he was meant to come to this place and learn this lesson; that the master has become the student.  The Rat King suggests that Splinter should always see things in such a way.

In the hospital, the old man watches a news report about the escalating violence in Sarajevo.  He bows his head in pain. 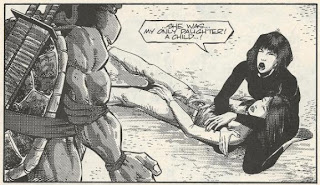 The Turtles mount the skyscraper where the Foot are headquartered and find a trail of dead Foot Soldiers.  They follow the trail inside and find Karai clutching the corpse of a young woman.  Karai reveals that the woman was her daughter.  In the corner is the corpse of the Elite Guard who killed her.  Karai tells Leo to promise that they will kill them all.  Leo bows his head and promises.

In a law office, April and Robyn meet with Mr. Fennet, the attorney for their late father.  Mr. Fennet reads the will and reveals that both April and Robyn will be receiving $200,000.  Robyn suggests that April return with her to L.A. so they can start their own business.  April declines, saying she has to follow her own path in New York, but appreciates the offer.  The two sisters hug and part on good terms. 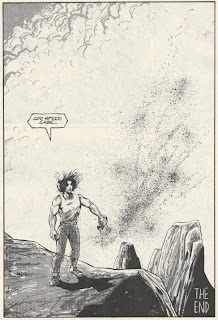 In Colorado, Casey is driving Gabe’s Jeep recklessly through the mountains.  He crashes it and then begins climbing to the highest point.  Once he gets there, he opens Gabe’s urn and spreads her ashes to the wind, wishing her god speed.

*The cliff where Casey spread Gabrielle's ashes will be revisited in Tales of the TMNT (Vol. 2) #15.

Poor Casey.  Admittedly, Gabe didn’t have a whole lot of personality in the short time we knew her, and a cynical reader might accuse her of being an example of "fridging" (introducing a female character just to kill them off solely for the benefit of making a male character more interesting), but what matters is what she meant to Casey.  So even if you don’t feel a pang of sorrow for Gabe when she dies, you sure as Hell feel it for Casey.  Lawson’s layouts of the “bad news” and Minor’s inking really got the somber tone across and you’re truly imparted with Casey’s sense of loss.  And speaking of Minor, his inking on this issue was fantastic.

The opening dream gives us our first look at “Dark Casey” or whatever you call him.  He’ll appear a few more times in the series.  He basically represents everything Casey was in the past but mutated to bizarre proportions.  Dark Casey is clad in Casey’s “vigilante” garb, albeit with more menacing colors, and he’s built with a Liefeldian physique that echoes Casey’s obsession with being a “badass” over everything else.  And to cap it all off, he speeds away in Casey’s Chevy; the material object he used to call his “baby” back in his vigilante days.  It’s an identity crisis for Casey, as his newer, gentler self is confronted by his darker, earlier incarnation.  The fact that he fails to save Gabe from Dark Casey is an interesting prophecy that I suppose represents a sense of guilt for losing Gabe (even though there was nothing Casey could do).

The inclusion of April seems to be another bit of precognition on Casey’s part and parallels his circumstance with April’s.  Both are experiencing the loss of a loved one and both are being bequeathed something in exchange.  In April’s case, it’s $200 grand.  In Casey’s case, it’s a baby girl.

As for the Turtles, they discuss one of the less glamorous aspects of their origin; the fact that they were raised from childhood by Splinter to kill his mortal enemy.  They’re conflicted and it makes total sense; they want to obey their father and sensei but they don’t think the life he’s made for them is particularly fair, either.  The father/sensei dichotomy of Splinter has been one of the more fascinating but thus far unspoken qualities of the character and it’s good to see the Turtles finally laying their feelings bare (with Leo, surprisingly, being the most critical of their upbringing).  Does Splinter see the Turtles as his children or as tools for vengeance?  The answer is “both”, of course, but can Splinter really categorize himself as a good father when he’s so willfully thrust his children into a life of murder and vengeance?  The blood debt was between Splinter and Saki, after all, yet it’s the Turtles and their friends who are always suffering the consequences of that debt.

From that angle, Splinter’s torturous humbling at the hands of the Rat King seems more like an act of karma than anything else.  As a master, he let his pride cloud his judgment as a father.  The Rat King's purpose was to tear down that wall of pride (in a rather disgusting way).  Splinter really needed to be taken down a peg.

I’ve always found Mirage Splinter to be less sympathetic because of this incongruity in his back story and it’s a reason why I tend to prefer some of his other incarnations in different media.  The idea of Splinter passing on his knowledge and skill to his children so that they can keep themselves safe in a world that doesn’t understand them is perfectly fine.  But passing on that knowledge with the condition that they must go out into the world and murder all his enemies without question… I’m not so hip to that.  It definitely makes Mirage Splinter a more complicated character, but with so many different writers over the years, it makes him seem like a big fat hypocrite, too.  If Splinter really loved his kids then I imagine he’d have swallowed his pride and not sent them on his revenge mission.  Yeah, he uses the excuse of being too old and weak to do it himself and that it pains him to delegate the task to his children, but how about you just let it go, instead?  IDW’s Splinter has been appealing to me because we’ve been shown his moral dilemma of Father vs. Sensei from the get-go and the Turtles have been shown to have no fewer reservations about carrying on somebody else’s blood debt.

“City at War” is illuminating for all these reasons as it encourages you to think harder about the characters than ever before.  In regards to Splinter, though, I’m not sure if the illumination so much exposes the character’s inner turmoil as it does some sketchy and flimsy writing.  Mirage wants Splinter to be a loving parent and a merciless clan leader.  And I’m sorry, but the rat can’t have his cheese and eat it, too.

Grade: A (as in, “And yeah, Karai’s got to be pushing at least 40 if her daughter’s that old.  I kind of hate the ‘Shredder’s daughter’ stuff all the other continuities have run with.  I think she may even be older than Saki…”)
Posted by TMNT Entity at 11:16 AM