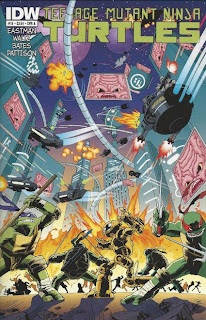 On the planet Neutrino, the Neurtrino Resistance Fighters’ command center is under attack from a unit of Rock Soldiers.  The Rock Soldiers load two hostages into their drop ship while others continue to open fire on the Neutrino Commandos, Chet and the bewildered Ninja Turtles.  The good guys fall back for cover and the Turtles demand answers from the Neutrinos, as they don’t understand any of the gibberish they keep spouting over their communicators (Krang?  Honeycutt?  Fugitoid?).  Commander Dask promises to give the Turtles their answers if they can get Chet to safety and beat back to the Rock Soldiers. 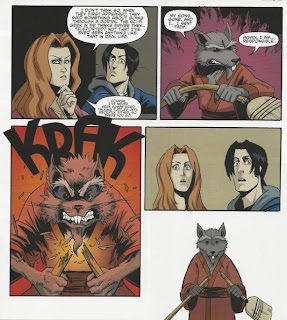 Back on Earth, in the church lair, April and Casey relay the bad news to Splinter.  April says she heard one of the pointy-eared weirdos say the word “portal” before vanishing, so she theorizes that the Turtles and Chet were teleported some place.  Splinter blames himself for his sons going missing and has a brief emotional breakdown (snapping a broomstick).  He apologizes for his outburst and reassures himself that the Turtles can handle themselves.  April recalls seeing a weird soldier made of rock when she stole the Turtle Tracker from Stockgen and suggests to Casey that while the Turtles are away, they do their part to get some more answers.

Back on Neutrino, Mikey spots a Rock Soldier carrying off Princess Trib.  With the Neutrino Commandos Dask and Kala getting his back, Mike narrowly rescues Princess Trib just as the drop ship full of Rock Soldiers takes off with the other hostages… King Zenter and Queen Gizzla. 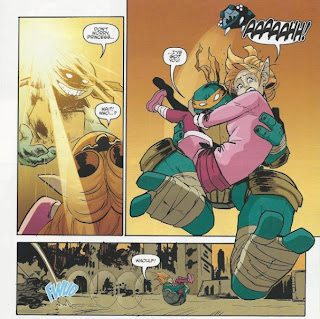 At Stockgen, Casey waits outside in the van while April goes inside for some clues.  April approaches Lindsey and asks where Chet is.  Lindsey isn’t very forthcoming until April reveals that she knows everything about the “turtle retrieval operation”, as well as all the other mutant specimens that Stockgen has been creating.  Lindsey is shocked, but April assures her that her “intern” status was just a cover created by the higher ups for security purposes and that she’s been in on the project since the beginning.  Lindsey says she doesn’t know where Chet is for sure, but that he’s probably on Burnow Island helping Dr. Stockman with General Krang’s secret project.  From the shadows, Karai catches an earful and is particularly fascinated with “Burnow Island”.

On Neutrino, Princess Trib thanks the (extremely smitten) Mikey for the rescue, but fears what Krang will do with her parents.  The Turtles demand their answers and Chet decides they deserve the truth.  He transforms back into the Fugitoid and gives them the lowdown.

He explains that they are in Dimension X.  He was originally a Neutrino named Professor Honeycutt who was conscripted by the Utrom Supreme Commander Quanin into providing scientific research for his conquering efforts.  Honeycutt realized that the war effort was draining the planet Utrominon of a vital substance called ooze which kept both the planet and the Utroms alive.  Quanin brushed off the claim (though his protégé, Krang, had reservations) and continued his war effort until the ooze consumption left Utrominon uninhabitable and killed most of the Utroms… and Quanin, too.  Taking over, Krang had the surviving Utroms moved to the planet Earth via his inter-dimensional teleporter and placed in stasis on Burnow Island with the last reserves of ooze.  Krang decided to terraform Earth into a new Utrominon and set Honeycutt to work on building a device to do just that: The Technodrome.  Chet escaped (becoming the robot Fugitoid in the process) and has been laying low on Earth working for Stockgen ever since.  The Utroms have merely come to rescue him at last. 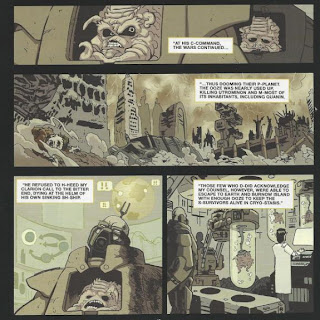 Princess Trib explains that the NRF needs Honeycutt to help them finish a weapon that could crush Krang once and for all, but Commander Dask laments that the weapon has been damaged in battle.  Suddenly, they receive a communication from Krang.  Krang tells the NRF that he has taken over the Royal Palace on Neutrino and has the King and Queen at his mercy.  Holding a gun to their heads, he offers an ultimatum: Deliver the Fugitoid or watch the King and Queen die.

*April encountered a Rock Soldier at Stockgen while stealing the Turtle Tracker in TMNT Microseries #7: April.

*Although the indicia lists the publication date as January, IDW experienced a customs delay from their overseas printer that set this issue back by a whole month.  Unfortunately, a mishap between Diamond distribution and IDW’s Memphis warehouse resulted in this issue getting delayed by an additional week for roughly half the country (not getting it until February 13th).

*This issue also featured a bonus gallery of sketches by Ben Bates and a tribute to the late Franco Urru (artist of TMNT Microseries #1:Raphael).

*This issue was originally published with 4 variant covers: Cover A by Ben Bates, Cover B by Eastman and Pattison, Cover RI by Mark Torres, and Cover RE Dimension X Exclusive by Eastman.

Man, what a killer wait this was.  I’m not out to condemn IDW for the delay because, jeez, 18 issues into the series and this is the FIRST one to miss a month.  That’s a pretty good track record once you consider how rotten other publishers (namely the Big Two) are at getting their books out on time.  I’ll admit, the additional one week wait was particularly excruciating mainly because everyone was talking about how awesome the book was and I STILL couldn’t read it!

But these things happen.

It’s a real treat to see those ideas fleshed out and built upon.  Prior to this comic, I think the Super Turtles manga was the deepest look into the back story of the Neutrinos we ever got (and even that wasn’t what one would call “deep”).  IDW's Dask, Zak and Kala are, admittedly, those characters in name and appearance only.  Some folks on the forums have questioned the point of using those characters if they're going to change all their most notable aspects.  Gone are the beatnik-isms, the flying hot rods and the carefree attitudes only to be replaced by teeth-gritting, gun-toting and mild swearing.  While I’ll concede that reviving characters just to completely alter them can be irritating to some (especially Neutrino enthusiasts because oh god those actually exist?), I would like to point out that TMNT has no shortage of characters who are already vastly different in their portrayals across the varying media.  In the Fred Wolf cartoon, Leatherhead was a black-hearted villain that talked in a Cajun accent.  In the Mirage comic and the 4Kids cartoon, he was a sympathetic mood-swinger with a kind heart and massive intellect.  The two incarnations share nothing in common but a name and a species.  I look at the Neutrinos in a similar way.  In one continuity they’re hod rodding beatniks, while in another they’re kickass commandos.  It’s nothing new to the TMNT franchise and shouldn’t be enough to put anybody off, I would hope.

Mikey having a crush on Princess Trib was a curveball, considering he was in love with Kala in the old cartoon and some fans probably expected that affection to be carried over.  I’ll admit that I find most Turtle romance subplots loathsome, but that’s primarily because most media doesn’t take the time to develop them.  The Fred Wolf cartoon had several romances, most of which didn’t extend past two episodes, each a season or more apart, and were added as an afterthought.  The Mirage comic dabbled in romance with half as much interest, occasionally pairing two random characters together like a 12 year-old shipping fangirl (Leo X Radical is my OTP!!1!!).  Archie had Raph and Ninjara, to their credit, and it was probably the most developed romance in any Turtle medium. Was there any romance in the 4Kids cartoon?  Hell if I can remember.  If there was, it didn’t leave much of an impression on me.

So yeah.  Turtle Romance.  If you’re going to do it Waltz, please, don’t half ass it.  We’ve had enough of that over the past two and a half decades.  Unfortunately, I fear Mikey and Trib’s budding romance will end with Mikey going back to Earth, Trib having to stay on Neutrino and the two sharing a predictable “it can never be” dialogue when all is said and done.  But hey, prove me wrong!

(And before anybody brings it up, I haven’t watched the Nickelodeon TMNT cartoon yet, but I hear the thing between April and Don has been cute.)

Honeycutt’s backstory on Quanin and the Utrom/Neutrino war was some nice, sepia-toned mythology building.  And judging from the look of Quanin’s robot body, will probably tie into the backstory of the currently running “Secret History of the Foot Clan” miniseries.  We even get a long overdue explanation as to why Krang had so much trouble procuring ooze for Stockman (he needed it to keep his people alive in stasis).  Thankfully, the payload of exposition dances around delivering information the audience already knows (only briefly touching upon elements from the Fugitoid micro) and mostly focuses on a fresh history lesson.  Props for that.

I’m starting to lose my credulity when it comes to April’s continued access to Stockgen.  I would think that after the events of her micro, she would be blacklisted from the whole joint.  I get that there were plot devices that can be used to explain how nobody knows she stole the Turtle Tracker (power outage cut off the security cameras, Slash killed the Rock Soldier that saw her, Stockman’s too invested in the Technodrome project to care about Stockgen security breaches anymore, etc.), but she’s gotta start pressing her luck eventually.  She’s already beginning to weave a lie too elaborate to maintain forever.

Ben Bates continues to impress me on the art front.  With this issue, he really starts to employ some of the more animated elements that worked in his favor on Archie’s Sonic the Hedgehog and Mega Man titles.  Moments of exaggerated facial expressions and body language are amusing but not overbearing; they don’t break with the overall consistency in tone that’s been running in this series, but embellish certain scenes just enough to make them extra funny.  He’s quickly becoming my favorite artist to handle the ongoing.

So “Krang War” heats up.  There are some subplots thus far that are wearing on me or I suspect will lead no further than a cliché, but the overall story is really exciting.  Hopefully I won’t have to wait 60 days for the next installment.

Grade: B- (as in, “But why wouldn’t Chet tell the Foot Clan about Burnow Island if he was trying to maneuver the Shredder into thwarting Krang…?”)
Posted by TMNT Entity at 8:18 PM