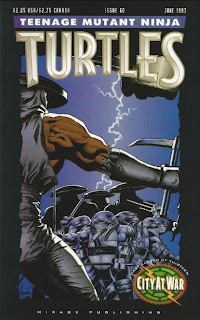 Five Foot Elite Guards drop down from the hole in the ceiling of the Second Time Around shop and confront the Shredder (who is really Karai in disguise).  The Shredder orders the Elite Guard to commit seppuku for dishonoring their master.  One Elite Guard, Tomei, follows the order, but the remaining four aren’t so easily duped.  Karai removes her helmet and orders her Foot Soldiers to attack.  The Turtles join the fray, too. 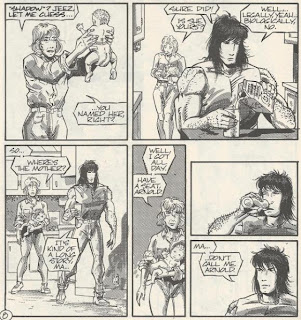 With his newborn in his arms, Casey stops by the old apartment building that his mom owns.  Mrs. Jones welcomes “Arnold” back home and tells him that he can have the three-room apartment in the basement.  Mrs. Jones is curious as to where Casey got his new daughter, Shadow.  Casey sits down to tell his mom the whole story, though he asks that she stop calling him “Arnold”, first.

Back at the Second Time Around shop, the Elite Guard are making mincemeat of the Foot Soldiers.  The Turtles hold their own in the battle, but the Elite Guard make for formidable foes.

At a coffee shop, April chugs down some coffee while looking over the real estate section of the New York Daily Times.  She circles a rental property.

At the hospital, the old man looks sullenly out his window at the city.  His ID bracelet reads “Buscheyev, Nathaniel R.”. 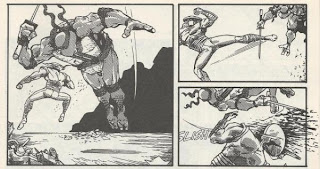 At the Second Time Around shop, the Turtles are taking their lumps, but so are the Elite Guard.  Leo manages to take one down by chopping his face off (holy shit) while Karai circles in a standoff with another.  On the roof, one of the Elite snares Raph with a manriki-gusari.  Raph grabs the chain and jumps down the hole in the roof, pulling the Guard with him.  The Guards is impaled on a pile of debris. 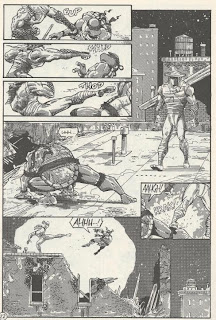 Karai, meanwhile, is disarmed by her opponent and kicked off a ledge to a lower floor.  The Guard leaps down after her, but she quickly grabs a busted lamp post and uses it to impale him.  Back on the roof, Don goes one-on-one with an Elite Guard and loses badly.  The Guard breaks Don’s leg and kicks him down the hole in the roof.  The Guard follows him down into the building and he’s confronted by Karai.  He disarms Karai then holds a blade above her, prepared to strike.

Alright, we’ve finally gotten to the big showdown.  For an “Elite" Guard, that Tomei guy was a real moron.  Thankfully, the other Elite Guard point that out and don’t fall for such an idiotic ruse.  I say “idiotic”, but it was actually a pretty good strategy.  Use the imagery of the Shredder to draw the Elite Guard out of hiding and then lure them into an ambush.  The only problem was Karai stupidly deciding to stop at the Second Time Around shop for some nostalgia, leaving them undermanned for the big confrontation and in an arena that offers them no advantage over their opponents.  I like Karai and all, but she really messed this one up.

Seeing the Elite Guard throw down in this issue, a part of me wonders if they weren’t actually better fighters than the Shredder-himself.  Admittedly, we only ever got three opportunities to see the Shredder fight in the Mirage series, but it really feels like the Elite Guard are putting the Turtles through more of a wringer than Oroku Saki ever did.

This is mostly an action issue and Lawson lays the fight scenes out nicely.  This was really Lawson at his peak and I don’t think he ever managed to convey action and energy this well ever again.  It’s very cinematic and the panels flow from one to the other, drawing your eyes in the proper directions around the page to give the static imagery an illusion of movement.  It’s really great stuff.  And brutal, too!  I sort of commented on it during the summary, but man, Leo chopping off that Elite Guard’s face was intense.  And I love the way Lawson staged the scene, too; with the “camera” shooting from behind so all you see is the back of the Guard’s hat and a stream of gore flying along the trail of Leo’s blade.  Modern comics would want to show you everything, but I found it more horrific from the angle Lawson used.

The inking and toning team of Aiken and Talbot also bring the best out of Lawson’s art.  His most modern stuff (TMNT Vol. 4, Tales of the TMNT Vol. 2) attracts a lot of derision, and I’m not immune to criticizing it, but I think when he’s paired with the right inkers and toners, Lawson’s stuff can look amazing.  “City at War” is really some of his best work, but I don’t think it’d be a fraction as palatable without Talbot’s and Aiken’s contributions.