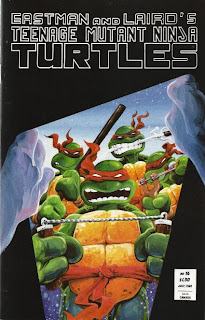 In a warehouse, a little girl offers to tell the reader a story.  Before she can, the “Cowboy Cola” cup she’s drinking from vanishes and she realizes that she only has a little time left to thank some individuals who helped her.  She invites the reader into her time machine (a big white cute) and tells them that they’re going back seven years to just before she was born.

Seven years ago (the “present”), a purse snatcher makes off with an old lady’s handbag.  The Ninja Turtles stop him and scare him off, then use the old lady’s pet dog to return the purse.  Leo wanders off alone to an old warehouse and the time machine appears in front of him.  The little girl steps out of the cube and gives Leo a big hug (much to his surprise).  She expresses familiarity with Leo, but the Turtle has never met her before.  Leo fetches his brothers and the little girl uses that opportunity to shoo the reader out a window before the Turtles can see them.  The other Turtles return and the little girl gives them each a hug and a kiss and thanks them for everything.  She then climbs back into her time machine and vanishes. 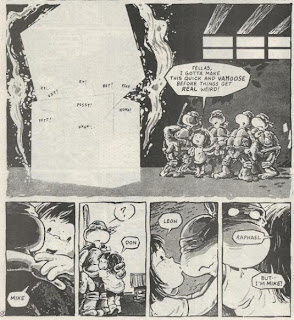 An instant later, the time machine returns.  The Turtles expect the little girl to come climbing back out, but instead they’re greeted by a small, bug-eyed creature.  The creature says that it’s from the future and has read all their comic books.  It came back in time to ask them for help.  The Turtles, more confused than ever, demand the whole story.

The creature explains that its parents (Bobby and Manda) live a couple blocks down the street.  Its father is trying to sell his new soft drink, Cowboy Cola, but can’t get it off the ground.  Worse than that, its mother is pregnant and the couple needs money before the baby is born in two months.  The creature says that to make ends meet, Bobby will take a job at Maxi Mega Multi Corp Capitalist Conglomerates doing research into a radioactive serum that will create a “Master Race”.  Bobby will bring home radiation from that project that will affect the baby in Manda’s womb.  The baby will become hyper intelligent and self-aware even before its birth.  Of course, it will end up being born the deformed creature that it is now. 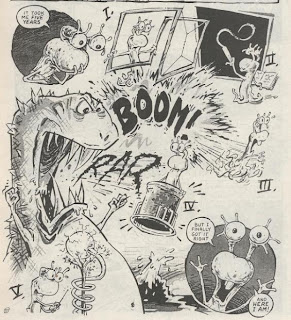 The creature further explains that after it was born, it knew that its parents would fear it and the government would want to dissect it, so it fled to this same abandoned warehouse and spent the next several years building a time machine.  It then took the time machine back to two months before it was born to enlist the help of the Ninja Turtles.  The creature says it wants the Turtles to keep Bobby from taking the job at MMMCCC and thus prevent the creature from being pelted with radiation in the womb (allowing it to be born a normal child).

The Turtles are unsure about helping, as they don’t think messing with history (even if it’s their present) is a good idea.  The creature runs off without them and they give chase.  The creature lures them into a nearby home where they come face to face with the startled Bobby and Manda.  Thinking fast, the Turtles decide to help the creature out.  They tell Bobby that they’re the welcoming committee from MMMCCC and look forward to seeing him every day at work.  Bobby and Manda faint and the Turtles sneak back to the warehouse. 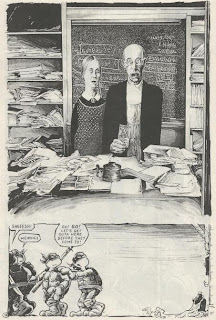 At the warehouse, they find the creature, but it’s not the creature anymore.  It’s slowly transforming into the same little girl that they met earlier.  The creature-girl realizes that because the timeline is changing, it needs to get back to the future ASAP and climbs into the time machine and vanishes without saying goodbye.

*TMNT #16 is the first “guest issue” of the series and as such is non-canon to the ongoing Mirage TMNT storyline.  The actual full-on “guest era” will begin after TMNT (Vol. 1) #21.

Although this isn’t technically the start of the “guest era” of TMNT Vol. 1, it is the first “guest issue” of the series and a reasonable enough point for me to lay out my feelings about Mirage's polarizing experiment.

By and large, I really don’t care much for the Vol. 1 guest era.  On principle, I think it was an interesting idea, but it went on way too long and rarely lived up to its own potential.  The guest era was initiated to invite various creators to apply their own unique spin on the TMNT and offer the audience a wide array of stories and styles linked only by the familiar characters.  What we wound up getting was a lot of surreal comedy rubbish.  Surreal comedy rubbish by several different creative teams, but it was all surreal comedy rubbish never-the-less.  Michael Zulli was one of the few creators to interpret “your own take on the TMNT” not as an opportunity for stupid zany comedy antics, but for a genuine reinterpretation of the characters and their origins.  Nearly everybody else?  Surreal comedy rubbish.

And twenty consecutive issues of that can really start to wear on you.

But that’s my impression of the Vol. 1 guest era as a whole, looking back at the entire experiment.  This lone issue, all by itself… Now that’s a different matter altogether.

TMNT #16 by Mark Martin is actually a really cute and really fun story with a lot of ambitious storytelling methods not just in the script, but in the art, too.  It is a well-crafted comic book and one I admit I didn’t appreciate the first time I read it (when I associated it with all the surreal comedy rubbish of the guest era that is positively exhausting to read through).

Martin employs a lot of narrative tricks that are great fun to wrap your head around.  The story “loops”, ending right where it began and taking the narrative full circle.  At first I didn’t really get the need for the unseen reader gimmick, but later I realized that it was a neat way to get the audience “involved” in the time travelling shenanigans.  When the story begins, “you” aren’t your present day self, but your future self.  The little girl returns you to the present and sneaks you out a window and your future self exits the story.  Then, at the end, your present day self stows away on the time machine and connects to the very beginning of the tale, becoming your future self.

It’s some wild stuff and shows how strange, elaborate and carefully scripted Martin’s story really is.

Martin’s art also provides some wild variety, as the little girl is terribly cute and cartoonish while many of her environments look almost photo-traced for realistic authenticity.  When the Turtles first appear, they’re drawn in the same style as Eastman and Laird’s cover for TMNT #1 before turning into Martin’s own style for them.  When the creature recounts the tale of Bobby and Manda, they’re drawn in a simplistic comic strip fashion, but when the Turtles encounter them, they’re drawn as a detailed parody rendering of “American Gothic”.  Again, there’s a truly impressive sense of craftsmanship involved in this single issue on all fronts.

I guess I really only have two criticisms toward this issue and the first is really more a criticism of the sequels.  And the criticism is that the sequels exist.  TMNT #16 is a great one-shot, standalone story, but Martin ends up going back to the well after its run dry and the sequels boast none of the charm inherent in this story.  Sort of like how “Pirates of the Caribbean” and “The Matrix” are excellent films, but when considered as part of a trilogy they’re immediately brought down (because those sequels were shit).

My second criticism, and one that really does distract from the overall quality of this story, is that the Ninja Turtles don’t need to be there.  They’re superfluous to the plot and it ends up feeling like Martin had a fully formed script or story summary in his head before sitting down to draw this issue and then stuck the Turtles in there so he could get the exposure from the brand name.  What purpose do the Turtles truly serve?  As recipients for the creature's/the little girl’s exposition?  The unseen reader character whom the little girl is constantly talking to fills in that role just fine.  Are they there just to scare Bobby and Manda away from MMMCCC?  The creature could have done that all on its own by popping in on them the same way the Turtles did (the only quality of the Turtles that saves the day is that they’re weird-looking; a quality shared by the creature).

In the end, this is a wonderful story about an adorable, time travelling little girl, but the Turtles absolutely do not need to be there and are only included so that this could be a TMNT guest issue.

That aside, it’s still a clever script with a lot of humor and personality put into the art.  It’s a perfect example of Martin’s storytelling skills and it’s only brought down by being part of an unnecessary trilogy and by, well, being an awkward Teenage Mutant Ninja Turtles comic.

Grade: B+ (as in, “But the issue basically had me at ‘adorable little girl clutching a teddy bear and rubbing her eyes’.  That was unfair”.)