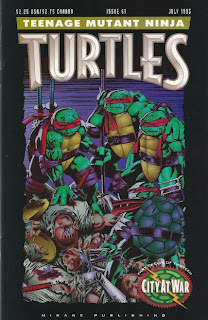 In the ruins of the Second Time Around shop, the Elite Guard is about to slit the helpless Karai’s throat.  Don realizes he can’t make it to her in time and, seeing a discarded machinegun by a dead Foot Soldier, understands that he has no choice.  Don shoots the Elite Guard and saves Karai, then throws the gun away in disgust.  Karai tries to help him up, but Don’s leg is broken. 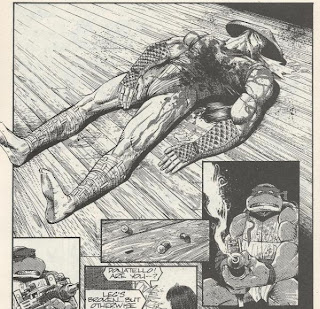 Elsewhere in New York, April enters the apartment building she was looking at buying with her inherited fortune.  The owner, Mrs. Jones, greets April and gives her a tour.  She says she’d been looking to sell the place since her husband, Herb, died five years ago.  Mrs. Jones takes April down to the basement to introduce her to the handyman; her son, Arnold.  “Arnold”, of course, turns out to be Casey Jones.  Reunited at last, April and Casey embrace.  Mrs. Jones decides to get the paperwork ready. 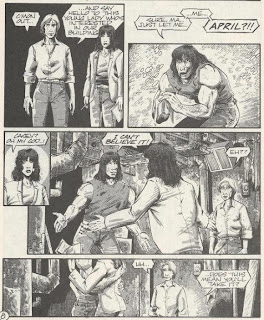 Back in the Second Time Around shop, Leo and the final Elite Guard are having a one-on-one duel on an upper floor.  Leo slashes the Guard across his gut and the Guard, in return, disarms Leo and kicks him in the face.  Leo tackles the Guard through a hole in the floor and they both tumble down a story.  They fight hand-to-hand for a while until Leo finally takes the Guard from behind and slowly breaks his neck.  Having watched the battle from the floor above, Raph and Mike comment that it’s all over.

In the hospital, a nurse tells Mr. Buscheyev that the doctor will be discharging him soon.  Mr. Buscheyev packs his things and sits sullenly on his bed. 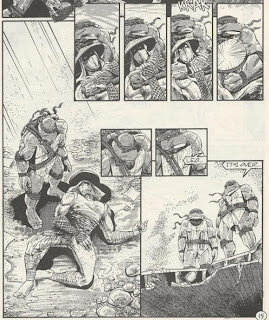 At the antique shop, Leo forms a splint for Don’s leg while Mike makes a travois to carry him out of the building.  Karai promises to fulfill her end of the bargain now that the Foot civil war is over; the Turtles will never be bothered by the Foot Clan again.  Mikey asks what Karai plans to do next.  She says that she’ll return to Japan to spread her daughter’s ashes in Asana Bay then she’ll get back to managing the Japanese branch of the Foot and restoring proper order to the organization.  Karai says that although she grieves for her daughter, her loyalty to the Foot doesn’t allot her much freedom.  She tells the Turtles that now that they are free from the shadow of the Shredder, they should use the opportunity well.  Leo assures her that they will.

*How Casey’s dad died will be revealed in Tales of the TMNT (Vol. 2) #56.  In that story, his father’s death will be retconned to have happened more than 5 years ago.

*Chronologically, Karai will appear next in Tales of the TMNT (Vol. 2) #43.

*In the branching Image continuity, surviving members of the Foot Elite Guard will return in TMNT (Vol. 3) #16.

*In the distant future, Karai-herself will finally break the truce in Tales of the TMNT (Vol. 2) #40.

“City at War” set the bar pretty high.  It took all the characters to their lowest point, explored them inside and out, then set them free to rise above their shortcomings and grow before our eyes.  Where the heck do you go from here?  That’s a problem the Mirage series never really succeeded in getting over (and a fact Karai and the Turtles discuss in the last pages of this issue).

But I’m getting ahead of myself.  That discussion is best saved for the next and last issue.  Here, we finally conclude the action and, even though it’s only 20 pages, the fight is pretty great.  I mentioned last review that these Foot Elite Guards seem like more of a handful than the Shredder and, indeed, Leo seems to have more trouble taking down the last Elite Guard than he did Oroku Saki.  Chalk it up to the nature of one-upsmanship; Lawson was obliged to draw a more epic battle than before and, as a result, a nameless Elite Guard comes off as a fiercer opponent than the Shredder ever was.

The brutality of the showdown is especially striking, as it devolves from a sword duel, to hand-to-hand, to straight-up dirty fighting.  While there’s grace and fluidity in Lawson’s layouts, the same can’t be said for the battle itself.  Leo loses his cool and in one panel looks like he’s trying to gouge the Elite Guard’s eyes out.  Then they tumble over a ledge, punch and kick each other and Leo finally triumphs not with some flashy ninja move, but by sloppily breaking the Guard’s neck from behind.  It really shows how the Turtles, even cool-as-a-cucumber Leo, have reached the end of their rope and are just unleashing themselves like beasts.

That’s also evident in Don’s takedown of the Elite Guard threatening Karai.  He breaks out a machinegun to save the day and feels disgust over what he’s been forced to do.  Don having an objection to firearms, admittedly, is something that’s never come up before now, and might have done better with some foreshadowing, but the reaction in the scene gets the idea across just fine.  Splinter didn’t raise them to use guns and he views them as the weapon of the enemy.

In my review for “Temps” I came down a little hard on the message of “City at War”, and I suppose I should elaborate here.  The story in itself is about consequences and how the cycle of violence inevitably leads to more violence; a never-ending circle.  And that's a great message which, when the arc begins, is very well illustrated.  My problem is that this penultimate issue essentially uses violence to end all violence, contradicting that message.  By slaughtering all their enemies, the Turtles are now free from the consequences of their past actions (save for a few isolated incidents here and there).  The moral ends up becoming, “violence only leads to more violence until you massacre all who stand in your way, and then you’re invincible”.

From the standpoint of delivering a message to the audience, the truce with Karai does more damage than good.  But, from the standpoint of telling an ongoing narrative about the Turtles, the truce offers a breath of fresh air.  We’ve reached an end to the Turtles vs. Foot Clan arc, at least for now, and that lets the Turtles set their baggage down and have all sorts of crazy new Foot-free adventures.  Of course, robbing TMNT of the Foot also ends up robbing the series of any discernible direction, but at least the potential was there.