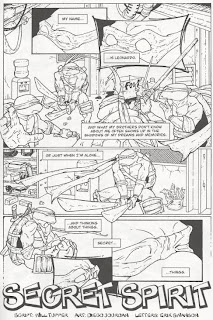 Down in the sewer lair, Leo is practicing weapons sparring with his brothers.  As his brothers begrudgingly go through their exercises at his behest, Leo reflects on just why he’s such a dedicated hardass.

He remembers back when he was younger and how Splinter tried to teach him a lesson in art; a lesson he didn’t understand at the time.  However, many years later, he finally gets what Splinter was trying to teach him.  Leo throws himself into training and the single-minded pursuit of perfection not because he’s the older brother and “protector” of the family (though that IS a factor).  He dedicates himself to training and discipline because he considers it “fun”. 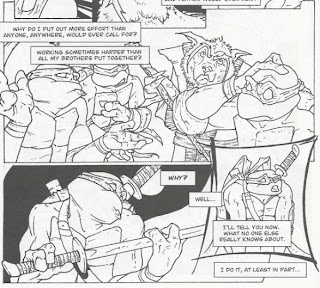 Just as an artist loses themselves in their craft, Leo likewise loses himself in his training.  He gets a thrill whenever his hard work and sacrifice pays off and he can experience the fruits of his labors.  Leo keeps this fact a secret from his family, as he feels it might undermine his perceived image as the tight-laced leader who takes the world on his shoulders.

Finishing the exercise, Leo tells his brothers that they’re going to do it again.  The other Turtles whine, but Leo isn’t having it.  In reality, he just wants to share his “art” with his brothers and maybe get them to experience the same thrill that he does.  Of course, he can never *tell* them that, so for now, his motivation shall remain a secret.

*Chronologically, this one is difficult to place.  As the Turtles are shown living in the sewers, there are a few points in the timeline where it can go.  However, since Leo illustrates a sense of wisdom and no longer considers himself “young”, I would personally place it in the Mirage “Vol. 3” era.

*This is part of a series of character-themed back-ups by Tupper, the others being “The Mother of All Anger”, “Fathers and Daughters”, “Practical Jokes”, “Credo” and "Conflict Resolution".

Leonardo is a tough nut to crack, being the “Cyclops” of the group and all.  It’s a role that requires a martyr personality, in a way, as it’s a job SOMEBODY has to do even though it means everyone will find you boring and no kid will want to be your character on the playground during recess.  Leo is that character; the buzzkill, milquetoast, no-nonsense leader archetype who spends his free time going over battle strategies and whenever anybody else starts to have fun or do something interesting, rest assured he’ll be there to tell them to “Knock it off!  This is serious business, mister!”

Tupper fights that uphill battle with Leo’s installment in his character-themed vignettes, trying to get to the root of Leo’s dullsville syndrome.  The answer Tupper comes up with is one that, like Leonardo-himself, isn’t very interesting.  The end epiphany isn’t that Leo trains like he’s got a katana up his ass just because he feels a crushing sense of responsibility, but also because he thinks it’s fun.  Well, yippee.

The better revelation that Tupper made, at least from my perspective, was also the one he glossed over haphazardly toward the beginning of the vignette and spent little time cultivating; that Leo regards self-improvement and the search for perfection as an art.  This is his passion, this is his hobby, this is what he WANTS to do with his life.  Like any artist, be they a painter, an author or a sculptor, his passion consumes him and no matter what he accomplishes, he’s perpetually motivated by the sensation that he “can do better next time”.  Of course, his brothers don’t exactly share in that same burning obsession, which makes sharing in his art a bit of a pain for them.

The writing style for this vignette is highly stream-of-consciousness, as Leo leaps from one thought to another and dwells on his contemplations for only the briefest of moments.  It’s an interesting approach, but it makes Leo’s thoughts seem scattered and disorganized.  It lends a quality of a genuine inner monologue to Leo, as we so rarely think linearly when reflecting on something, but it also makes reading those thoughts akin to navigating a confusing maze.  And at 8 pages, it’s one of Tupper’s longest vignettes.  The conclusion about Leo’s “secret” is fairly humdrum and not only does the story take a jumbled approach to reaching that conclusion, but it takes nearly twice as long as it needs to get there.

Artist Diego Jourdan uses a lot of exaggerated expressions to try and wring some humor from the intentionally bland script.  As the contemplation is occurring within the sanctity of Leo’s mind, the scenarios he concocts are strictly imaginary; a quality Jourdan exploits for fun.  As Leo asks a series of insipid questions to himself, the other Turtles and Splinter all shrug their shoulders and make uncertain faces.  When he compares his “big brother” status as to being like the head of a Mafia family, he envisions all the Turtles in Italian suits.  Jourdan has fun with these visuals, so even though the script is a ponderous thing, the art strives to lighten the mood.

While I wouldn't say I dislike “Secret Spirit”, I don’t think it was as successful in getting into the head of its target as Tupper’s other vignettes.  We really don’t learn anything fresh about Leo or his philosophy and the end result, whether intended or otherwise, is that the Turtle is exactly as boring as we’ve always suspected him to be.