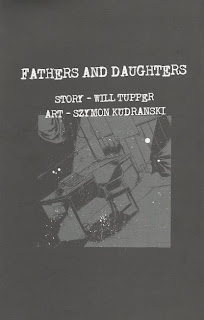 Sitting down at a typewriter in his apartment, Casey begins forming a letter for his infant daughter, Shadow, to read when she’s old enough.  As Shadow sits in her rocker and gurgles, Casey goes on about how he never thought he’d be in this situation, with a daughter, but is grateful that fate turned out the way it did.  He quotes her Uncle Leo, who says that life is something that happens while you’re busy making other plans.  On the subject of her four uncles, he says he’ll tell her all about them when she’s a little older. 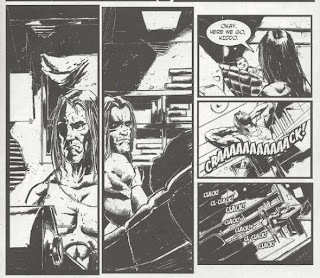 Casey pauses, then begins writing about Shadow’s mother, Gabrielle.  He says that according to Uncle Mikey, Gabrielle was named after an angel from the Bible.  Casey considers that an accurate description and laments that Shadow will never get to know her.  In fact, Casey wishes he’d had more time to get to know her before she passed away.

He then starts to tell Shadow about April, the only woman left in his life and an amazing source of comfort and inspiration.  He assures Shadow that April loves her and that she’ll love April right back.

Suddenly, Shadow’s gurgling turns to the word “da-da” and, ecstatic, Casey carries Shadow downstairs to show Leo, Raph, Mikey and April that she’s spoken her first word.  Unfortunately, all Shadow does for the audience is burp.  Casey shrugs his shoulders and figures “like father, like daughter” and burps right back.

*Chronologically, I would place this story after TMNT (Vol. 1) #62.  The timeframe (so soon after Shadow’s birth), the location (the apartment April bought from Casey’s mom) and the absence of Donatello (who stayed behind in Northampton with Splinter after “City at War”) gives the placement away.

*This is part of a series of character-themed back-ups by Tupper, the others being “The Mother of All Anger”, “Secret Spirit”, “Practical Jokes”, “Credo” and "Conflict Resolution".

Will Tupper’s series of character vignettes continues, this time focusing on Casey Jones.  Tupper chooses a rather interesting time in Casey’s life to give him a moment of introspection, forgoing the “vigilante Casey” era so many authors are drawn to and instead opting for the “stay-at-home dad” era of Casey’s life.  It’s actually a great point in his timeline to drop in on him, as the actual “City at War” arc didn’t really take time to show Casey and Shadow bonding as father and daughter.  The aptly named “Fathers and Daughters” rectifies that, acting as a quiet epilogue to Casey’s “City at War” storyline and fills in something that always felt “missing” from the end of that narrative.

“Profound introspection” was never one of Casey’s strong suits, even after he’d given up the vigilante life in favor of raising his child, but Tupper manages to find Casey’s voice and deliver the message despite all that.  Casey’s language in the letter is sweet without being flowery and “deep” without sounding intellectual.  It’s “simple”, which is befitting of Casey, but never-the-less sincere and moving.  And just in case readers STILL felt Casey was acting too “mature” in this vignette, Tupper ends on a crude burp gag to remind us all that he’s still the same old Casey.

In a way, “Fathers and Daughters” reads like the first Shadow story, despite her having been introduced during “City at War”.  If you’re determined to depress the hell out of yourself, read it back-to-back with Tales of the TMNT #69, where you get to see exactly how Shadow’s story ends.  And it’s no happy ending, either.  It’s sad to see how some of Casey’s predictions about Shadow’s upbringing don’t come true.  She never appreciates April during their time together, and after April’s gone, Shadow spends her adulthood lamenting that fact.  Then there’s seeing Raph babying her and doing a silly juggling act while wearing Batman ears to amuse her.  A shame how their relationship ends up.

Kudranski’s art is both appropriate and a distraction.  His dark and heavily inked style suits the moodier moments of Casey at his typewriter, searching for ways to do Gabrielle’s memory justice.  However, he doesn’t do “cute” very well and Shadow looks pretty ugly.  She often looks more like a poorly molded baby doll than a genuine infant.  His Turtles also boast some creepy expressions that would seem more likely to terrify small children than make them giggle.  Still, I like the décor he throws around Casey’s office (an Usagi Yojimo poster and a poster for “Evil Dead 2”).  The turtle shell-shaped baby rocker was a nice touch, too.

One of the best qualities of Tupper’s vignettes was that he chose very, very specific moments in the lives of the characters, usually moments where the narrative failed to offer those characters a chance to reflect, and promptly steps up to the pitcher’s mound.  This moment in particular is a real curveball as it represents a vital moment in Casey’s growth, but a moment overlooked for years.