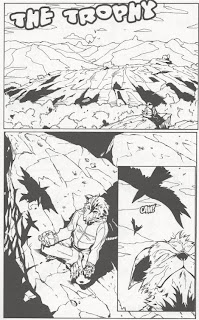 In the White Mountains of New Hampshire, Splinter meditates, taking in the serenity of the forest and its wildlife.  Later, he comes across a majestic white-tail buck, only for the deer to be suddenly shot and killed by a hunter (Bobbie).  Bobbie radios his buddy (Keith) and brags about the amazing trophy he’s going to have for his living room.

Splinter knocks Keith out and steals his clothing.  He then sneaks up on Bobbie and disarms him.  Bobbie attempts to flee, but Splinter easily catches up with him and then paralyzes him with some strategic blows. 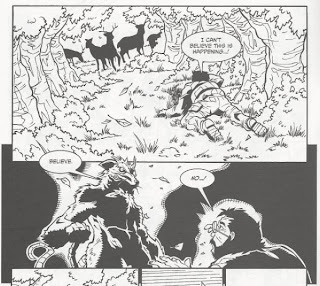 Bobbie begs for his life, but Splinter reminds the hunter that he has killed not for food but for sport.  Splinter asks if he should not reserve the same privilege to kill him for “fun”.  Bobbie says he has a wife and kid waiting for him at home.  Splinter points to the buck’s corpse and standing by it are a doe and a yearling.  Splinter discards the clothes he’s stolen, tells Bobbie to consider his actions and vanishes.

Keith catches up to Bobbie and, helping his friend up, asks what hit them.  Bobbie says it was a monster.

In the hills, Splinter continues his meditation, weeping.

*Chronologically, I would place this story after TMNT(Vol. 1) #62, when Splinter, feeling distant and disturbed after his encounter with the Rat King, had elected to stay and live in the woods.

*The location for this story (the White Mountains of New Hampshire) comes from the opening editorial by Murphy.

*According to Murphy in the opening editorial, this issue is based loosely on a personal experience (where he saw an albino white-tail deer stuffed and mounted in a neighbor’s living room as a child).  The deer in this story was originally going to be albino, but according to Murphy, Laird forced him to change it.

Murphy pens another of his usual sermons, this time dramatizing an event from his youth (which he details in the editorial).  I wouldn’t mind the lesson so much, though I kind of felt Splinter was jumping to conclusions about Bobbie killing for sport.  All Bobbie says over his walky-talky is that the antlers are going to look good as a trophy.  That doesn’t mean Bobbie was going to throw the rest of the buck away.  The personal story Murphy relates in the editorial involved seeing an entire white-tail stuffed and put on display, but if Bobbie was just taking the antlers as a trophy that would seem to indicate he was going to use the rest of the buck to feed his family.  If he was planning on just cutting off the antlers and leaving the rest of the deer to rot, there was no implication of that in either the art or the script.

The end result is that Splinter looks like a dick.  A dick that jumps to conclusions.  On a personal level, I don’t agree with hunting just for trophies, but I take no exception to hunting for food even if it is recreational (and in many places, it's encouraged to keep deer populations down so they don’t overrun their habitat and destroy their ecosystem).  Splinter could have at least waited to see if the guy was going to cut the head off and leave the meat behind, otherwise he just beat the dude up for the sake of teaching him a lesson he already knew.  And Splinter’s a rat who just learned how to eat other rats for the sake of survival.  Come off your high horse, old man!

It’s a typical habit of Murphy’s even when he has the best of intentions; he wants to deliver a lesson so badly he doesn’t think the actual delivery of that lesson through.  So instead of a story about a jerkass game hunter slaughtering animals for fun instead of food, we get a story where Splinter overreacts, judges someone without all the facts and then beats the living hell out of him to boost his own ego.

Ray-Anthony Height’s artwork was nice and I rather like the look of Splinter in a track suit.  It’s funny but fitting and kind of dates the story in a static timeline sort of way (when I think gaudy track suits, I think the late 80s and early 90s thanks to present-day-Biff’s fashion sense in the “Back to the Future” movies).  Pridolf’s inking leaves too much empty white space for my liking, though.  It creates the illusion of a bright, sunny afternoon, but we never get the feeling of shade even when the story enters the thick of the woods.

Overall, “The Trophy” is just one in a hundred examples of Murphy meaning well but rushing his ideas to paper without properly developing them to get the point across.  If anything, when read after “City at War”, you could interpret this as Splinter dealing with his own guilt over having to eat rats to survive the winter and taking those emotions out on anyone he can, even if they don’t really deserve it.