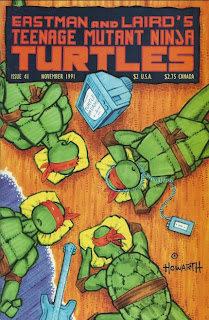 Having just foiled an invasion of the Party-Headed Platypus People of Proxima Five, Leonardo is bushed.  He collapses in the living room of the sewer lair and goes to sleep.

In his dream, Leo envisions himself as the big man on the high school campus, adored by girls and worshipped by all.  In algebra class, though, he finds his dream getting really boring.  Leo tries to spice things up with some surfing, but the teacher (Mr. Math) promptly brings him back to “reality”.  Mr. Math then asks Leo to solve the equation on the board, but Leo can’t do it.  The teacher transforms into a monster and attacks the class.  Mr. Math attempts to eat a girl named Melissa, but she happens to be Leonardo’s crush.  Leo takes his sword and slays Mr. Math, much to the swooning of his classmates.  Leo chills out in his seat, at least until the substitute arrives: A t-rex named Miss Gnarl who threatens to eat anyone who fails her pop quiz. 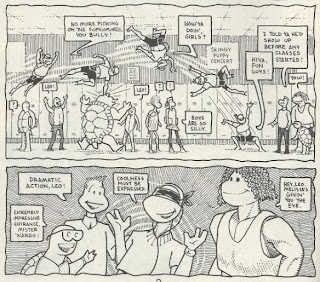 Leo slumbers on, finding that some dreams are impossible to control.

Raph, meanwhile, has overdosed on comic books and conked out.

In his dream, Raph is on an alien planet looking for evildoers to punish.  He finds the two worst evildoers of them all just standing around: Ron and Russ Post.  Raph accosts them and Russ bails, though Ron is happy to give Raph a challenge.  Using his reality-warping powers, Ron produces guns out of thin air, turns his fists into concrete and takes all of Raph’s sai stabs to no ill-effect.  Raph realizes that Ron is a worthy opponent who cannot be beaten and is thus giving him the fight of his life. 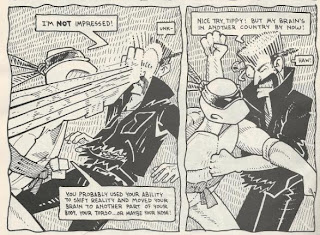 Raph sleeps with a huge grin on his face, hoping his dream will last forever.

Don has just eaten an entire bag of cheese cookies and passed out on the couch.

In his dream, Don recalls how the Government captured him, his brothers and Splinter and locked them in a secret facility.  Their file was then sold to a Hollywood producer who created a cartoon about them: "Mutant Ninja Teenage Turtles".  It became a smash hit and the Turtles became icons.  Eventually, budget cuts caused the Turtles and Splinter to be released, but they found that they could not adapt to life now that they’d become celebrities.  Every time they try to thwart a crime, they’re mobbed by fans.  Eventually, they become couch potatoes and grow morbidly obese. 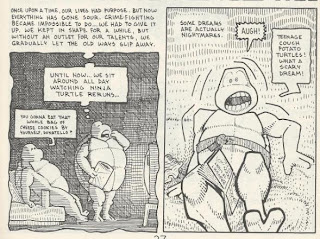 Don wakes up from his nightmare in a cold sweat.

Splinter meditates and uses his dream to further his enlightenment.

In his dream, Splinter sits at a fancy restaurant with three guests: Akira Kagemusha (a legendary Japanese shadow warrior), Albert Einstein and Alfred Hitchcock.  Together, the quartet discuss the works of Edmund Husserl, Jean Paul Sartre and Friedrich Nietzsche. 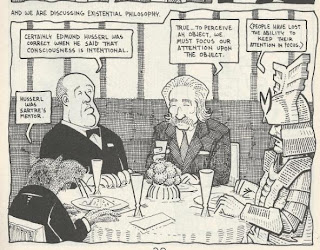 Splinter continues his meditation, growing wiser all the while.

Mike, particularly bushed after thwarting the Platypus invasion, dozes off while listening to rock music.

In his dream, Mike is a musician performing a rock concert to an adoring crowd.  Suddenly, the evil Dr. Vox and his Fogeymen attack, determined to destroy all sinful rock ‘n roll music.  Mike defeats the Fogeymen, but finds that he cannot touch Dr. Vox, as Vox has a forcefield made of public opinion protecting him.  Vox claims that so long as the majority rule is on his side, no one can touch him.  The crowd disagrees and rushes to voting booths.  Casting their votes FOR the continued existence of rock ‘n roll, Dr. Vox finds himself suddenly powerless and unable to continue fighting Mike. Mike awakens suddenly from his dream, confused, but hoping he can fall back asleep and finish his concert.

*Having been published during the TMNT Vol. 1 “guest era”, this issue is not part of the Mirage TMNT continuity “proper”.

*There was no such person as “Akira Kagemusha”.  The name is a play on the film “Kagemusha” which was directed by Akira Kurosawa.

*Howarth would go on to produce one more TMNT issue, TMNT Special: The Haunted Pizza.

*This issue should not be confused with another story titled “Turtle Dreams” which appeared in Turtle Soup (Vol. 1) #1.

If you didn’t like “the Turtles have weird dreams one after the other” plot device this time around, they’ll take another stab at it with TMNT (Vol. 2) #1.

Anyway, Matt Howarth’s “Turtle Dreams” is an interesting experiment and one of the few “surreal” installments of the Mirage guest era I felt used that effect to its benefit.  Howarth takes us into the heads of each character and we get to see their true heart’s desires or their deepest fears as they might perceive them.

I think Leo’s segment was my favorite overall, as it showed a very unique side of Leo not often explored.  As the leader of the team, he has to be the milquetoast spoilsport that can never have any fun.  Here, in his imagination, we see that Leo dreams of popularity, getting the girl and making friends as a “normal” teenager.  I thought that bit of introspection on Howarth’s part was GREAT and this is one of my favorite Leonardo stories, regardless of whether it “counts” or not.  In the real world, Leo’s position as commander and all the crushing responsibilities that come with it prevents him from relaxing or maybe even following his inner ambitions.  But in his dreams he’s free to be what he never can be and that’s “big man on campus”, loved and appreciated by all.

And kudos on Howarth for remembering that the Turtles are teenagers.  Even Eastman and Laird seemed to forget that part of the title after a couple issues.

The other segments don’t all fair as well as Leo’s, I’m afraid.

Raph never struck me as being a comic book nut; that’s always been more of Mikey’s thing.  Still, I enjoyed his reaction to his dream; fighting a never-ending battle against an unbeatable opponent brings him veritable ecstasy.  That’s Raph all over.

The problem with his segment is that it’s one big advertisement for Howarth’s “Those Annoying Post Bros” comic and he sure isn’t subtle about it.  All during the battle Raph is fawning over how awesome and amazing Ron Post is; the greatest warrior he has ever fought and no one can compare.  I’ve never read Howarth’s Post Bros comic, but after reading this issue I refuse to do so out of protest.

Don’s nightmare is a great bait ‘n switch on his inner fears.  It starts out with him and his brothers getting captured and experimented on by the Government, big shock, but then it quickly turns into a meta-textual look at the TMNT franchise going mainstream with a kid-friendly cartoon.  Suddenly, Don’s greatest fear is that he can no longer be a legitimate crime fighter and will wind up squandering his future in obscurity, growing fat.  It really pulls the rug out from under you as you read it and it’s easily my second favorite segment in this issue behind Leo’s.

Lastly is Mike’s, which I have to confess was a bit of a dud.  It turns into a preachy story about how sinister public officials can be destroyed if everyone does their part to “rock the vote”.  Yeah.  That’s right.  “Rock the vote”.

Does MTV even run that corny ad campaign, anymore?

It’s a tongue-in-cheek public service announcement, for sure, as Mr. Vox is a goofy villain that feels like he should be in an animated Captain Crunch commercial, trying to turn your cereal soggy.  Still, the whole story revolves around delivering a trite message and it’s not a solid note to end the issue on.

Well, that’s not true.  The issue ACTUALLY ends on a one page comic where Ron Post tells everyone how they can order comics from Howarth himself for cover price plus shipping and handling.  If Howarth is anything, he’s a shameless self-promoter.

But the shameless self-promotion and cheesy “rock the vote” message aside, “Turtle Dreams” is surprisingly deep.  Not all the segments are winners, but when Howarth hits a chord, he hits it hard.  Leo’s fantasy really makes you think twice about the character and almost feel sorry for him; he can NEVER be the person he truly wants to be and can only live that life out in his dreams.  Don’s, meanwhile, is some great commentary that perhaps works better on a Fourth Wall level, but can still be applied to the character in-universe.  The other segments aren’t as strong, but Howarth’s simplified yet energetic art makes them fun to read, regardless.

So yeah.  “Turtle Dreams” was kind of the surprise hit of the Vol. 1 guest era for me.  Weird.

Grade: B (as in, “But for all my insulting the Post Bros comic, apparently it ran for a pretty long time across three or four different publishers”.)
Posted by TMNT Entity at 8:28 PM