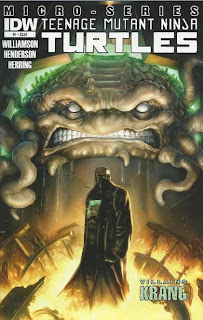 On Burnow Island, a Rock Soldier is informed by a guard of the dead Utrom left behind after a female ninja broke in and emptied the ooze from its pod.  The Rock Soldier interrupts Krang (who is recuperating from his recent battle on Neutrino), much to the General’s fury.  Krang is further infuriated by the news of the stolen ooze.  The Rock Soldier attempts to help Krang into his robot body without being ordered to and Krang slaps his hands away.  Krang ponders to himself that the Rock Soldier thinks of him as weak and needs to be reminded of his place… 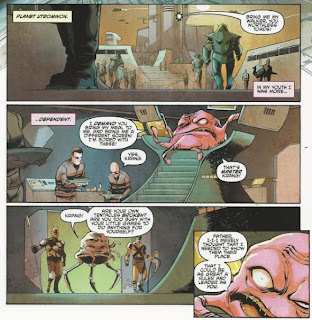 Many years ago.  Krang is a spoiled, bloated sack of tentacles sitting in his palace on Utrominon, barking orders at servants.  His father, General Quanin, enters his chamber and looks upon his son’s dependency with disgust.  Krang asks if he can attend his father’s upcoming war council and Quanin denies him the privilege, as he considers his son to be worthless.

At the council, Quanin learns that the cyborg Traxus, an old enemy of his, has taken control of a prison complex on the hostile world of Morbus.  Quanin decides that a commando team of Utroms will perform a sneak attack from the swamps and take Traxus by surprise.  Krang, listening in on the council, decides to stow away on the drop ship and prove his worth in battle.

The drop ship lands on Morbus , but as the Utrom commandos disembark, their Commander steps on a landmine and sets off an ambush plotted by Traxus, who had anticipated Quanin’s strategy.  All the Utrom commandos are killed in the ambush save Krang, who slinks away after his robot body is destroyed. 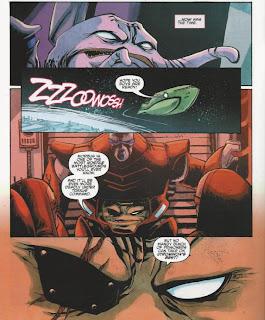 Knowing that Morbus is a toxic hellhole, Krang struggles at first to survive in the wild, being preyed upon by a giant lizard as well as other assorted creatures.  However, as the days pass, he grows stronger and discovers he has a knack for survival and utter brutality.  Eventually, he determines that he is ready to conquer and rule.  Taming one of the giant, killer lizards, he launches a direct assault on Traxus’s prison stronghold.

Krang rides straight into Traxus’s chamber and demands that Traxus surrender or die.  Traxus’s right hand men, Tragg and Granitor, offer to take Krang down for him, but Traxus wishes to squash Quanin’s son by himself.  Krang has the lizard spit acid into Traxus’s eyes.  Krang then leaps from the lizard’s back, wraps his tentacles around Traxus’s neck and proceeds to stab him to death with a crude spear.  Observing this display of strength, Tragg and Granitor offer Krang their allegiance, as it is the way of their people to bow to any higher authority that usurps command through sheer strength.  With Traxus dead and Tragg and Granitor at his side, Krang recruits or kills all the remaining prisoners and conquers Morbus. 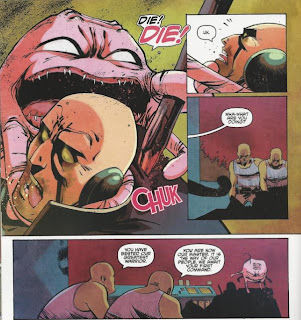 Later, Quanin arrives and see’s Krang’s success for himself.  Not only has Krang conquered the planet, but he has transformed Traxus's cyborg corpse into his new robot body.  Quanin addresses Krang as his son and Krang finally has the satisfaction of having earned the respect he so craved.

Back in the present, Krang snaps out of his flashback.  The Rock Soldier bows his head, apologizes for trying to help Krang without being ordered and says he’s willing to accept any punishment.  Krang tells the Rock Soldier not to be afraid and asks him politely to help him into his robot body.  As soon as he bends down, however, Krang attacks and kills him with nothing but his tentacles.  Slinking across the floor, Krang pities any who would look upon him and assume him feeble and helpless.

*Karai killed the sleeping Utrom and stole the ooze from its pod in TMNT (IDW) #19.

*Morbus was originally introduced in Archie’s TMNT Adventures #13 as the planet Krang was banished to after his defeat.

*This issue was originally published with 4 variant covers: Regular cover by Tyler Walpole, Cover RI by Henderson and Herring, Cover RE for Dynamic Forces by Henderson, and Cover RE Jetpack exclusive by Kevin Eastman.

Krang: A character I love, though I really don’t know why.

Well, that’s not true; I know exactly why I like Krang.  Sure, he was a comedy relief oaf in a silly bald muscle-man suit that talked like Catherine Hepburn, but it was his back story that intrigued me above all else.  In the old Fred Wolf cartoon, he was a warlord out to conquer entire dimensions (not just planets, not just a universe, but DIMENSIONS) and, when finally captured, was deemed so dangerous that he had to have his brain removed from his body to dilute his potential menace.  And even after being reduced to a singular organ and banished to another world without any resources, he STILL managed to stage a comeback and become a threat once again (well, “threat” might be a debatable description, but you get the idea).

All the pieces for a truly great villain were there, but the sappy comedy nature of the old Fred Wolf TMNT cartoon meant that the writers could never really use those pieces to their fullest potential.  Even the Archie TMNT Adventures comic, which routinely dabbled in heavier storylines, wound up squandering Krang as a character by removing him from the series in its early years.

So when Krang was first introduced into the IDW TMNT universe way back in TMNT (IDW) #1, I had a pretty good feeling that we’d finally be getting a Krang that lived up to the basic potential of his back story.  And yep, Krang’s been pretty great so far.  But now being an Utrom instead of a disembodied brain, and having never been banished from Dimension X, he needed an update to that back story.

This first installment in the TMNT Villain Microseries doesn’t disappoint, as it begs the question “is Krang still a threat outside his robot body”?  That query is basically the heart of this story, as we learn that Krang is no pathetic slimeball even when separated from his weapons and technology.

In a way, IDW’s Krang feels like a fusion of the original Krang and the 4Kids Utrom Shredder named Ch’rell.  One of the things I liked so much about Ch’Rell’s portrayal in the 4Kids cartoon was that even when removed from his Shredder body, he lost none of his confidence or capacity for fucking shit up.  The first thing he did in “Secret Origins, part 3” after exiting his body was to attack Raph and nearly suffocate him.  In “Turtles Forever”, once revived by the Fred Wolf Shredder and Krang, he proceeded to jack them up until they were finally able to knock him out (with some effort).  Whereas the original Krang was routinely portrayed as helpless and pitiable without his  robot body, Ch’rell was deadly with or without it.  So in many respects, Ch’rell was an important stepping stone in the evolution of Krang as a character.

What amused me most about this script is that author Joshua Williamson basically took Green Arrow’s origin but recast the part with Krang.  If you aren’t familiar with Green Arrow, he was a millionaire playboy named Oliver Queen who was a spoiled and helpless piece of uppercrust trash.  Then he got stranded on an uncharted island and had to learn to survive and grow strong.  Or, at least, that used to be his origin.  I dunno what his deal is in the “New 52” or whatever DC is calling their half-assed rebooted universe.  But anyway, whereas Green Arrow used his newly developed survival skills to help others, Krang instead uses them to conquer and destroy.  Because he’s a villain, you know.

In that regard, Krang’s origin may be a story outline you’ve experienced before.  Whether it was in the form of Green Arrow or not, “spoiled jerk learns to survive and rely on himself after being stranded in an inhospitable wasteland” isn’t a very new scenario.  Still, Williamson casts Krang in the role well and on a metatextual level it illustrates an evolution from the whiney, helpless Krang of the Fred Wolf cartoon, to the ruthless, threatening Ch’rell-like Krang of the IDW series.  And as a bonus, we get the origins for Tragg and Granitor, too (though does IDW’s insistence on spelling it “Tragg” instead of “Traag” bother anybody else?  No?  Okay, sorry I even mentioned it).

Not to sell Williamson short, but I get the impression that writing this story was the comparatively “easy part”.  The “hard part”, making a pink ball of tentacles look like a threatening monster of the wild, fell on artist Mike Henderson.  I’ll admit that when Krang first starts to go feral and attack wild animals with tiny wooden spears, I couldn’t help but smirk.  I mean, c’mon.  I’m only human, here.  And yet, the more I saw of Krang strangling his prey and relentlessly stabbing them with pointy sticks and leaping down from the treetops with a look of killer instinct on his face… the more I started to buy it.

Okay, it’s like this… have you ever seen the old B-movie “Fiend Without a Face”?  Of course you haven’t.  But basically, the movie is about tentacled alien brains from another dimension that come to Earth and start killing people.  They start out as invisible, but even after being revealed in all their unconvincing stop-motion glory, they still proceed to kill people with the same effectiveness.  They do so by leaping down from a vantage point, wrapping their tentacles around their victim’s neck so that they can’t be loosened or removed and then stick a proboscis into the person’s brainstem, liquefying their grey matter and sucking it out like a milkshake.  So yeah, after seeing “Fiend Without a Face”, I could buy a tentacled brain being able to kill things 10 times its size.

…Or “Alien”.  It’s like the facehuggers from “Alien”.  There.  Why didn’t I just say that to begin with?  “Fiend Without a Face”… the Hell was I thinking…

Anyway, to get back on topic, the art is good and Henderson deserves some extra consideration for making a bodiless Krang look like a genuine threat and selling the idea that he could kill vicious predators with nothing but a pointy stick.  Even Ch’rell’s stints outside of his Shredder body in 4Kids were played for humor, regardless of his effectiveness against his enemies.  As an epilogue to the “Krang War” story arc, where artist Ben Bates drew Krang looking a bit cartoony and funny (though I enjoyed his take, don’t get me wrong), Henderson’s psycho Krang serves as a sobering reminder that the Utrom General is NOT comedy relief and very much a deadly foe.

Grade: B (as in, “But I had to go back and change this snide little grading gimmick text because I originally thought the scar-faced Utrom Commander was Ch'rell but it turns out he wasn't so HAHAHA JOKE'S ON ME”.)