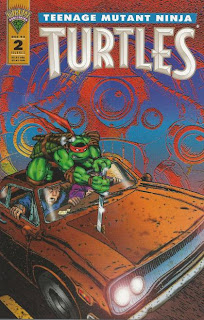 In the basement of Casey and April’s apartment building, the Turtles are loafing about in their cramped room.  Raphael finally cracks under the tedium and declares that he’s moving out.  Leonardo and Mike take his statement in stride, knowing that they’ve all reached a crossroads in their lives. 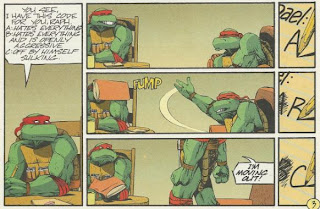 At a DARPA (Defense and Research Projects Administration) facility in the Southwest, two guards stand nervously outside of a heavily locked and fortified lab.  Apparently, there’s a new scientist in there who has been experimenting with dead bodies.  They hear a gunshot inside the lab and go in to investigate.  Both guards are shot dead by an automated sentry gun.  The mysterious scientist takes an access card from one of the corpses and uses it to override all entry into the DARPA facility, placing the building on lockdown.

At the farm in Northampton, Don is doing some yardwork out front when he sees a car coming.  He ducks behind some rocks to hide, but the people in the car see him take cover.  They don’t pry, however, and tell him that they just want to leave some literature on his doorstep.  After they’ve left, Don gets up to see what they placed on the doorstep.  It’s just a religious pamphlet.

On the rooftops of New York, Leonardo is going for an exercise run.  He feels like all his brothers are beginning to drift apart and wonders what the true cause is.  Is it that without Splinter, they’ve no guiding force keeping them together?  Or is it because now that the Foot Clan are no longer a problem, they’ve no common enemy forcing them to band together?  Or are they each just going through a point in their lives where they need to seek answers alone? 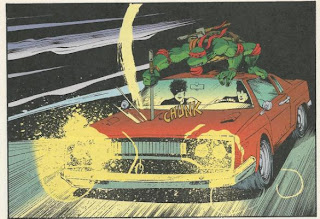 Suddenly, Leo hears gunshots and catches a car performing a driveby.  He leaps down onto the hood of the car as it accelerates and thrusts his sword into the engine.  The car swerves out of control and crashes into a lamppost, sending Leo flying toward a chain-link fence and the driver (who had fired the shots) smashing through the windshield.  Leo gets to his feet and retreats to the rooftops.  He returns to the scene of the crime and finds that the kid being shot at has died.  Leo sits down and ponders if anything in life is supposed to make sense.  He wants to believe that there’s some force creating order in the universe and that everything is not just mindless chaos.  However, his faith waivers and he wonders if he only thinks that because he himself is a “leader”.  But with his brothers separating, what is he a leader of, now? 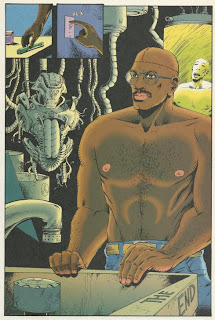 At the DARPA lab, the mysterious scientist shaves his head over a utility sink.  He then takes a red marker and draws a dotted line around the crown of his skull.  The scientist then takes one final look at his face in the mirror.  It’s Baxter Stockman.

*This issue contained a back-up comic, “I.M.P. part 2 of 3” by Jim Lawson and Eric Talbot.

TMNT Vol. 2 tackles a lot of fascinating issues beginning with this installment, showing just how deeply Jim Lawson gets these characters.  More than just an artist, he proves throughout Vol. 2 to be a very cerebral author.  It’s a shame his writing credits for the TMNT are rather slim.

When “City at War” wrapped up, I mentioned that it felt like a true conclusion.  If you took TMNT Vol. 1, the Microseries and Tales of the TMNT Vol. 1 together, you would have a complete, fully contained narrative with a beginning, a middle, an end and practically no loose threads to speak of.  With the Turtles finally coming to terms with the Foot Clan and fulfilling the destiny that was set before them ever since they were mutated, their story was pretty much over.

Except life goes on and even though they finally resolved the major overarching conflict since their series first began, they still have the rest of their lives to get through.  What Lawson tackles here is the question of “what now?”  Where do the Turtles go from here, now that all the common bonds that previously kept them together have dissolved?  They’re free to do whatever the hell they want, yet none of them can think of a damn thing.

In a way, this approach ties into their ages, too.  By now, they’re no longer kids but young adults.  “City at War” was their high school graduation.  And now that they aren’t kids anymore, their father no longer dictates the direction of their lives and they’re free to select their own path… Where do they go and what do they do?

The obvious answer is to separate and find out for themselves.  In regards to the idea of the Turtles going their own ways, I felt it was an especially inspired choice to put the primary focus of the issue on Leonardo.  “Leonardo leads”.  That’s… basically it.  That’s his whole personality and his whole shtick.  He’s the leader.  So naturally, he has the most to lose if the Turtles all go their separate ways.  His whole identity was wrapped up in being the leader, so what does he become when he has no one to lead?  Seeing Leo cope with this anxiety was pretty compelling stuff, especially as he wonders just what it was that truly kept their family together in the first place.

Then, of course, there’s the return of Baxter Stockman.  In his original appearance, he was little more than a one-shot, one-dimensional villain.  As soon as he was defeated, no one ever expected to hear from him again.  But here he is, after quite the extended absence.  I do wonder what prompted Lawson (or Eastman and Laird, since they co-plotted Vol. 2) to resurrect the villain after such a long time.  One might think it was to meet fan demand, as Baxter was a recurring villain in the Fred Wolf TMNT cartoon and gained more "mainstream" popularity, but the Mirage comic was usually pretty resistant to incorporating anything from the cartoon, so I’m not so sure I buy that theory.  The reality is likely that Lawson probably felt there was another story to tell with Baxter and brought him back.

Whatever the case may be, he’s a lot more interesting this go around than in his first appearance.  Likewise, the Baxter Stockman arc of Vol. 2 is the arc I remember best, as I enjoyed it much more than the DARPA stuff the volume ended on.

Grade: B+ (as in, “By the way, Jason Temujin Minor’s inks and Eric Vincent’s colors look really good.  For some reason, I remembered not liking them the first time around”.)
Posted by TMNT Entity at 9:53 AM