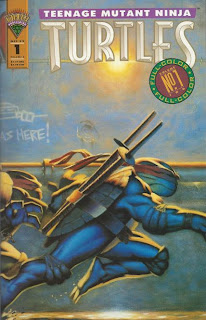 “Memories of the Future”

Splinter lays dead against a wall, having been beaten to death by a Mutant Turtle, who hovers menacingly over him with a bloody fist. 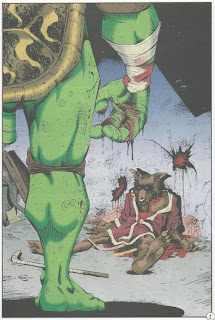 At the cave in Northampton, Splinter awakens from his dream.  Donatello, leg still in a cast, brings him his morning tea.  Splinter says that they must go to the torri and meditate, as he had a troubling vision during the night.  The pair journey to the torri and do so, though Don seems nervous.

In his meditation, Don sees an older version of himself hiking across the hills of Japan.  He looks over a small village with Mt. Fuji in the distance.  Suddenly, a flying car zooms over his head and the shock awakens Don from his vision.  Don tells Splinter of what he saw.  Splinter says that what he saw was the village of Chihaya; Splinter’s birth place.  Don asks why he would travel there and Splinter explains, “…to bury me.”

In New York City, Casey passes out in front of the tube, having eaten too much pizza.  Suddenly, he’s accosted by Dark Casey.  Dark Casey mocks him, saying that he took Gabrielle from him and that he’s coming for Shadow, next.  Casey awakens in a fright and rushes to Shadow’s nursery.  He finds her sleeping soundly in her crib. 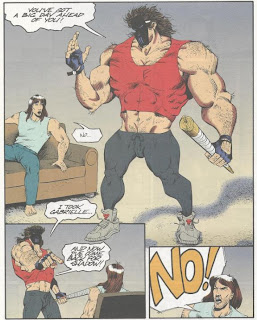 He has a talk with April and tells her about his dream.  Incidentally, she also had a strange dream.  In it, she was being chased through the sewers by the Mousers again.  Except this time, instead of being saved by the Turtles, she was saved by Baxter Stockman (who had strange tubes and wires coming out of his head).  They both agree to blame their nightmares on the pizza.

Down in the sewer, Raph thinks he hears something.  He sees a rat tightrope walking over a deep abyss.  Raph cruelly snaps the rope, causing the rat to fall to its doom.  Suddenly, the rope turns into the tail of a giant monster rat.  The monster rat attacks Raph and smashes him through a wall. 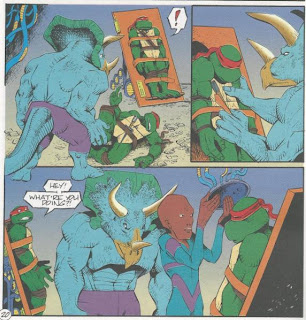 Leonardo sees Raph’s unconscious body come crashing through the wall of the room he’s in.  However, he can’t help his brother as he’s strapped to a table.  A Triceraton and an alien prop Raph up onto a table as well and attach all sorts of strange devices to him. Leo struggles as the alien looms over him with a syringe.  Leo blacks out.

Out of the blackness come several goofy creator credits, scrolling like the end credits of a TV show.  The credits end with the logo of the program’s production company: Michaelangelo Productions.

Mike awakens from his dream, having fallen asleep in front of the television.  He turns the TV off.

*Baxter Stockman sent the Mousers to kill April in TMNT (Vol. 1) #2.  Her dream of encountering Baxter again, in a strange new form, will come to pass in TMNT (Vol. 2) #6.

*Leo’s dream of Raph being taken hostage and strapped to a table in a lab will come to pass in TMNT (Vol. 2) #8.

*Raphael’s dream is harder to decipher.  He dreams of betraying a rat, only to have it return as a monster and attack him.  This could be interpreted as him betraying Master Splinter and suffering the consequences for his actions.  Whether this vague premonition comes to pass is debatable.  In TMNT (Vol. 3) #16, Raph battles a mad Splinter on the Astral Plane and stabs him with his sai.  TMNT Vol. 3, however, was retconned from Mirage canon by TMNT Vol. 4.

*Raphael will dream about betraying and killing Splinter again in TMNT (Vol. 4) #16.

*Likewise, the purpose of Mike’s dream is not so clear.  He seems to be dreaming of fulfilling some creative goal in his life.  He was previously shown taking an interest in writing in TMNT (Vol. 1) #17.  He’ll be shown having pursued that dream to the point of getting his work published in TMNT (Vol. 3) #6.  But, again, TMNT Vol. 3 was later retconned from continuity.

*This issue was originally published with a back-up story, “I.M.P. part 1 of 2” by Jim Lawson and Eric Talbot.

Oh boy.  This issue.  Let’s just get through these one at a time.

First off is the joint vision shared between Splinter and Donatello, showing Splinter being killed by an unknown Turtle and an older Don taking his body to Japan to be buried.  I think of all the dreams, this one fascinated and intrigued fans the most.  A Turtle killing Splinter?  The future?  Tell me more!

When Splinter eventually does die in Vol. 4, it appears to be of natural causes.  And rather than buried, he’s cremated on a funeral pyre in Central Park.  So what’s up with the premonition in this issue?  Good question.  Don is seen at Splinter’s funeral either doing something to Splinter’s body or taking something from it before the cremation.  The choice of Don specifically to be the one messing with Splinter’s remains may have been a deliberate callback to this issue.  The extent of that scene in TMNT (Vol. 4) #11 remains unclear, as the volume has been on indefinite hiatus.

Of course, visions aren’t always to be interpreted literally.  The Turtle killing Splinter could instead represent a betrayal.  Raphael’s nightmare would seem to further that idea, as Raph kills a rat and in turn is killed by a giant, vengeful rat.  When TMNT Vol. 3 (the Image series) was written, it was the canon continuation of Vol. 2 (Laird didn’t strike it from the record until he began Vol. 4), and I wonder if the entire “Vampire Splinter” arc was written with this bit of foreshadowing in mind.  In that story, Splinter “betrays” the Turtles by being mutated into a rabid vampire bat by Lord Komodo.  Raphael, in turn, “betrays” Splinter and “kills” him on the Astral Plane while doing battle.  By “killing” him, though, Raph ends up saving him and restoring his body and spirit to its original state.  Raph also “betrays” Splinter by joining the Foot Clan in that volume, too.

Of course, with Vol. 3 no longer being a part of continuity, at least from Laird and Mirage’s point of view (you’re free to make up your own minds about canon), whether or not that interpretation “counts” as the fulfillment of the premonition is debatable.  Really, Raph “betrays” his brothers and sensei every other issue he’s in by going against orders and fighting with them and being an unbearable prick.  So you could honestly interpret just about any of those future occurrences as fulfillment of the vision.

Most of the other dreams and their outcomes are more obvious and relate to later storylines that develop in Vol. 2.  Baxter comes back as a cyborg and infects April with a nanobot virus (a storyline that won’t see development until Vol. 4).  How that can be interpreted as him “helping” her is questionable.  During Vol. 4, though, it was April’s infection with Baxter’s nanobots that led to her discovering her true origins in TMNT (Vol. 4) #22.  So I suppose Baxter “helped” her learn about the true nature of her conception.

Likewise, Leo’s dream relates to a future storyline in Vol. 2.  Raph gets captured by a Government agency that imprisons and dissects aliens.  Leo and the others team up with a Triceraton and other aliens to free him, etc.  Of course, Raph is shown being experimented on by the aliens and not Government spooks, so it’s a bit muddled, but aren’t dreams always that way?

Casey’s dream is more of a callback to the dream he had during “City at War”, in which Dark Casey first appears and takes Gabrielle away from him.  It seems to imply that something terrible is about to happen to Shadow and that Casey will lose her forever.  Again, Vol. 3 may have run with this bit of foreshadowing, as Shadow is kidnapped in TMNT (Vol. 3) #6 and Casey spirals back into alcoholism in his despair.  But, AGAIN, “blah blah blah canon blah blah blah retcon blah blah blah”.  Dark Casey’s eventual return in Tales of the TMNT #31 can be interpreted as this vision being fulfilled, too, though a bit more literally than what I think was intended (Dark Casey is more a harbinger of doom and loss than an actual physical adversary to be fought, as he turns out to be in Tales #31).

Mike dreams about having his own television production company and it’s a one page “gag”.  Hard to decipher something like that.  But in the past, Mike was shown taking an interest in writing and, once more from the top, Vol. 3 ran with that character thread and turned him into a published author.  So the production company credits could be seen as a vision of Mike’s future in the high profile media arts.

Sigh.  Do I even have to say it?  “Vol. 3 was retconned so all that stuff about him getting published doesn’t count, etc etc”.  So then where does that leave this premonition in the tapestry of what supposedly “does” count?

Well, all these dreams seem to anticipate something very negative: Loss, betrayal, death, world-shattering revelations and so on.  …Except Mikey’s.  He gets his own production company.  Good for him!  But yeah, “one of these things is not like the others”.

Rather, the dream could be interpreted as Mikey being shown what COULD be if he were able to pursue his dreams of creating art for the masses.  However, due to being a “freak”, he can never stand in the spotlight and follow that dream and the vision is merely taunting him.  If you look at him on the final page, he seems to be either groggy or depressed.  If you interpret it as the latter, clearly the dream left him with a sad, empty feeling.  If Vol. 3 is removed from the continuity and Mikey is never shown pursuing his dream of creating art for others, then the premonition never comes to pass and that hurts him more than anything else.

It’s really hard to say.  If anything, this issue just made me think about the Image series all the more and realize how, intentionally or otherwise, it really carried on a lot of threads foreshadowed in this story.  From a personal, biased standpoint, I like to include Vol. 3 in the Mirage continuity contrary to editorial statements that say otherwise (and the two-issue Vol. 3 finale helps to reinstate it as part of the overall tapestry, but that’s another conversation).  If you take Vol. 3 into account, then a lot of these visions come to pass.  If you don’t, then many of these visions never seem to go anywhere.

Whatever the case, and however you choose to interpret these dreams (not saying mine are absolutely right), this is a good one for discussion.  It’s especially fun to go back and rediscover AFTER you’ve read everything published since, as it causes you to reevaluate various stories you may otherwise have never given a second thought to.