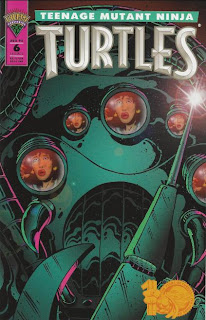 “Killer on the Loose”

Baxter Stockman (in his robot body) arrives in New York City.  He guns down a man in a phone booth and grabs the telephone directory from him.  Looking it over, he finds what he’s looking for and thinks to himself that he’ll finally have his revenge. 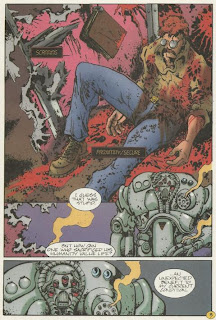 At the apartment, Leo, Mike and Raph are playing video games.  April bids Casey and Shadow goodbye as she heads down to the grocery store.  She gets in the Chevy and pulls out onto the street.  Baxter immediately bursts out of the sewers, tosses the Chevy onto one side and pulls April through the door.  He then extends a needle from his index finger and stabs her in the chest with it.  He drops her and crawls back into the sewers, telling April that her suffering has only just begun. 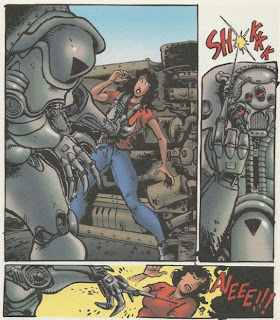 Casey sees the commotion from the apartment window and runs out to help April.  Leo stays behind with Shadow as Mike and Raph use the basement sewer entrance to keep tabs on the situation from below the streets.

Up above, April tells her story to a police officer who has no choice to believe her once eye witnesses start saying they also saw a giant robot.  Suddenly, two feds (Agent Friskas and Agent Lowell) appear and tell the officer that they’re seizing command of the investigation.  They start grilling April for details, but Casey tells them to get lost and helps April back to the apartment.  Friskas tells Lowell that he wants April staked out 24/7 as well as given a full background check, as he wants to know why Baxter went straight for her. 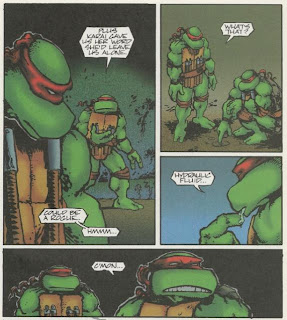 Down in the sewer, Raph and Mikey follow a trail of hydraulic fluid.  They think the robot might be one of the Foot’s, but that would be in breach of their truce with Karai.  The trail ends at a cave-in, completely blocking the tunnel.  Raph mutters to himself that he wants to know exactly what they’re up against.  On the other side of the cave-in, Baxter stomps away with one of his laser barrels smoking, overhearing Raph’s muttering.

*April had a premonition about her encounter with Baxter Stockman in TMNT (Vol. 2) #1.  What exactly he did when he stabbed April will not be revealed until TMNT (Vol. 4) #6.

I like to break Volume 2 up into four story arcs: the Turtles adjusting to their lives after “City at War”, the battle with the fish-woman and the giant turtle, the showdown with Baxter Stockman and the invasion of the DARPA facility.  Of course, these arcs don’t all occur independently from each other.  Baxter’s big comeback was foreshadowed back in the first issue and he’s been making his way toward New York in every issue since.  Still, the focus of each issue can be broken up into four arcs and we are now on the third.

The return of Baxter Stockman  was a surprise when I first read through the Mirage series, as I honestly thought he was just a one-off villain in this universe (if the Shredder only appears in four issues, what chance does Stockman have?).  I wonder if the choice to revive him had anything to do with his popularity in the children’s TMNT media, like the Fred Wolf cartoon, the Playmates toyline or the Konami video games?  During the years he was long forgotten within the Mirage books, his Caucasian counterpart was making frequent appearances as a recurring foe in all the other media.

Well, whatever facilitated the decision to bring him back in Mirage, I’m rather glad it happened.  If you go back and read my review for TMNT (Vol. 1) #2, I come down really, really hard on Baxter.  Fact of the matter is, in that one issue, he is NOT a good villain.  His motivations are shallow, his scheme is generic, his dialogue is straight out of a Saturday morning cartoon… he’s just lame.  But every character deserves a second chance and Lawson has turned a boring and forgettable foe into an ominous, lingering threat.  After five issues of build-up, Baxter finally connects with the main characters and he doesn’t waste any time getting down to business.

My favorite Stockman-related moment in this issue isn’t even when he stabs April with the needle (which will prove to be a loooooong simmering plot thread not to be addressed for almost ten years).  It’s the scene at the beginning, when he brutally guns down the guy in the phone booth.  It’s gratuitous gore and violence, completely senseless, but what makes it work is that Baxter comments on his behavior afterward.  He realizes that his action was stupid and excessive, but comes to the realization that he just doesn’t care.  Baxter then concludes that his new robot body has reduced his humanity and his conscience and rather than feel a sense of loss, he regards it as an unexpected bonus of his “upgrade”.

A lesser writer would have just had Baxter gun down the bystander and leave it at that, trying to use the violence and the brutality as shorthand for “Baxter’s a REAL threat now!”  But Lawson takes time to let the character reflect on his actions and contemplate what they mean and why he did them.  While the end result is more or less the same (“Holy shit, Baxter’s killing people and he just don’t care!”), we’re given an introspective reasoning behind it so that it doesn’t come across as using violence as shorthand for “seriousness”.

Anyway, if Volume 2 has been too slow for your tastes thus far, it picks up its pace with this issue and doesn’t slow down until the very end.  In fact, I’d say it doesn’t slow down PERIOD; it hits “The End” at 100 miles per hour (but we’ll talk about that when we get there).