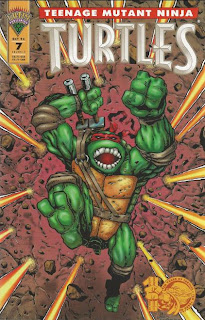 At the apartment, Casey changes April’s bandage and goes into the kitchen to make her some tea.  There, he conferences with Leo about the situation, telling him that the Feds are involved for some reason.  Casey asks if this may be the work of the Foot, but Leo says it just isn’t their style.  Casey becomes nervous, realizing the robot could have killed April.  Just then, Mike and Raph come home and say that the robot’s trail in the sewer went cold after it caved a tunnel in behind it.  Casey decides he’s going to find out who is behind the robot attack. 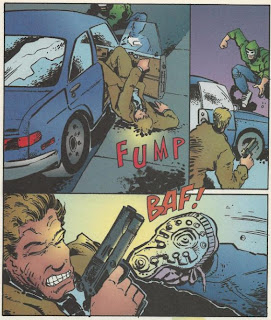 That night, Casey (disguised in a hoody and a bandana) attacks Agents Friskas and Lowell in their car (as they’re staking out April).  He knocks them out and steals their briefcase full of top secret documents.  Inside, he finds papers identifying the creator of the robot as Baxter Stockman.

The next day, Casey sends April and Shadow away with his aunt until the whole mess blows over.  Once they’re gone, Casey goes back inside and talks to the Turtles about a battle plan.  Leo suggests they wait, as Baxter’s attack on April was nothing more than a challenge, ensuring he’ll be back.

Mike tells everyone to come to the living room and watch the news.  The report shows a skyscraper being shot at by an unknown assailant.  His shots are being made with pinpoint, mechanical accuracy, spelling out the sentence “April, I’m coming for you tonight” in bullet holes.

The SWAT units eventually find the source of the gunfire on a nearby rooftop, but the machinegun is being remote-controlled, with the operator nowhere in sight.  Not far away, the Turtles and Casey assume the police have encountered the robot and decide to search the rooftops for Stockman.  They split up to cover more ground. 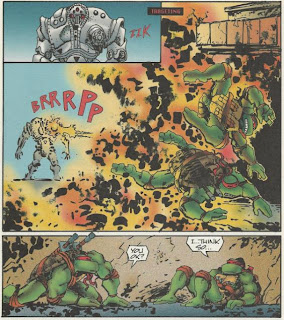 Leo and Mike eventually find the robot, who shoots at them, nearly killing them.  The robot introduces himself as the work of Baxter Stockman.  He gloats about his genius and explains that he’s studied his previous defeat countless times over the years and is confident he will have his revenge.  Leo and Mike attack, but Stockman’s onboard computer calculates responses faster than the Turtles can think and he effortlessly swats them aside.  Raph and Casey show up just in time and Raph hurls a sai at Stockman.  It bounces off Stockman’s armor.  He then picks it up, breaks it in two and throws the handle at Casey’s head hard enough to knock him out.  Raph runs over to an old chimney and shoves it over onto Stockman, but the robot shrugs off the attack. 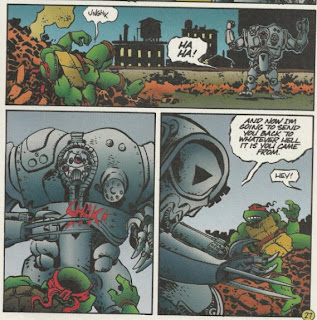 Stockman trounces Raph and is about to gut him with his gauntlet blades when Donatello and Nobody show up.

*The “Bog” back-up story which began last issue was skipped for this month.

All four Turtles, together at last.  It only took 7 issues.

This installment in the big Baxter Stockman rematch can get a little tedious and I think I know why.  What Lawson seems to be going for here is that the Turtles have no idea what’s going on.  They don’t know who sent the robot, why it attacked April, why the Feds are involved and so on.  They’re completely in the dark on the matter and they’re a little scared (or Casey is shown to be, anyway).  It’s not a bad approach.

The problem is that everything the Turtles are in the dark about?  We, as the audience, already know the answers to.  In fact, we’ve known the answers since the second or third issue of this series.  This issue takes its sweet time getting the Turtles up to speed and finding answers, but again, they’re answers we already know!  It doesn’t feel suspenseful because there’s no suspense for the audience.  Plenty of suspense for the characters, sure, but we already know all the major revelations the characters are going to have before they have them.  While it is important that the Turtles and Casey find out what’s going on, I don’t really think it needed to be so decompressed, at least for our benefit.  As a result, the first half of this issue is just a total bore.

And I hope you like 5-page sequences where the characters make tea and prattle on inanely, punctuating every other sentence with a variation of “Hmmm” or “Mmm” or “Mm Hmm”.  Because that’s 90% of the “dialogue” and “action” in TMNT Volume 4.  If anything, Volume 2 feels like it’s just getting the audience prepared for the doddering pace and dull, inconsequential conversations of Volume 4, “easing us in” so to speak.

But when the characters finally catch up with the audience and the action gets started, the issue really turns around.  While I still can’t say Baxter’s a particularly “deep” villain (his motivation has evolved from “I want money” to “I want revenge"), he’s at least more interesting in a fight and he puts the Turtles through their paces.  While I felt a bit cheated that Casey got taken out like a punk, he got a good scene earlier in the issue when he takes down the Feds and steals their briefcase.  And seeing how the TMNT fared against Stockman, he’d have just been wasting his time, anyway.

I liked the ever-present voice of Stockman’s onboard computer calculating appropriate reactions in battle faster than the Turtles can think.  It does make him feel rather invincible, as he’s got an answer for absolutely everything.  Not even the mighty brick wall can stop him!  And it worked so well against a bunch of Foot Soldier robots in the first episode of the Fred Wolf cartoon, too.

Oh yeah, and Don’s back (with Nobody, who has a new costume).  Good to see all four Turtles finally back together, though it’s just a last page cliffhanger.  Not much to comment on in that regard until next issue.

Grade: C+ (as in, “Can’t say I’ve seen this much standing around and chatting about bullshit since… the last Brian Michael Bendis comic”.)
Posted by TMNT Entity at 1:10 PM