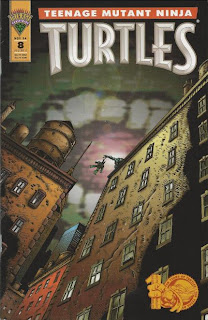 On the rooftop, Don and Nobody confront Baxter Stockman.  Stockman responds by plucking up a chunk of brick wall and hurling it at Nobody, striking him.  Stockman then hears a police chopper approaching and bids a hasty farewell to the Turtles.  To cover his escape, he attempts to fire a missile, but the damage he took during his fight with Raph causes his missile launching systems to malfunction.  The missile explodes inside him, obliterating his right arm and much of his upper torso.

Enraged, Stockman grabs Raph’s unconscious body and dangles it over the side of the building, threatening to drop him if Don or Nobody try to stop his escape.  With the police closing in, Nobody tells Don to retreat with Leo, Mike and Casey while he rescues Raph.  As Don picks Leo up, his brother asks him what he’s doing in New York.  Don explains that April called him and told him everything. 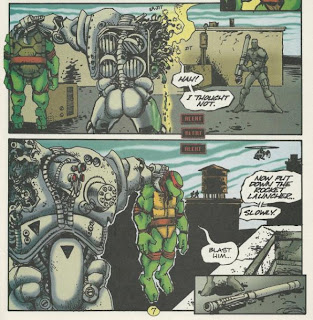 With the roof cleared and the cops closing in, Nobody pulls a bazooka out of his duffle bag and points it at Stockman.  Stockman tells him to drop his weapon or he’ll drop Raph.  Nobody discards his bazooka, but Stockman hurls Raph over the side of the building, anyway.  He then opens fire on Nobody, who dodges the attack and clears out just as the police chopper arrives.  Police officers open fire on Stockman, who leaps in the air and grabs the legs of the helicopter.  His weight pulls the chopper down to the street onto a crowd of cops where it promptly explodes.  Stockman emerges from the flames even more damaged and limps off. 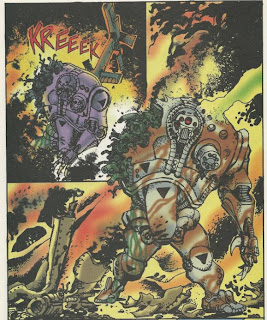 Don gets Leo, Mike and Casey to the safety of an abandoned basement and goes to see what the explosion he heard was all about.  He finds the streets swarming with cops and meets up with Nobody in an abandoned building.  Nobody delivers the bad news that Raph is missing.  Don is furious, but Nobody says there was nothing he could do.  And there may be a chance Raph survived the fall, as his body hasn’t turned up anywhere despite all the police surveillance in the streets where he should have landed.  Don and Nobody split up; Don going to look for Raph while Nobody uses his police identity to search official records for any reports on their friend. 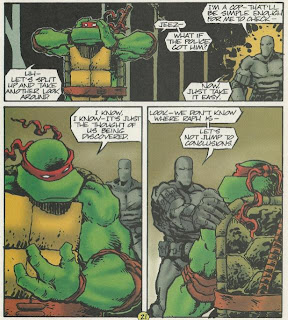 Down in the sewers, the badly damaged Baxter Stockman lumbers through a tunnel.  His internal systems have restored as much as they can, but he begins to feel feint and collapses.

In a lab somewhere, Raphael awakens, strapped to table with strange machines surrounding him.

*Leo had a premonition of Raph being taken to a lab and strapped to a table in TMNT (Vol. 2) #1.

Say what you want about Jim Lawson (and I know I’ve said my share of critical things), but that guy can lay out a fight scene like nobody’s business (or Nobody’s business, in the case of this issue).  Even if you don’t care for his finished pencils, he decompresses and sets up a battle with some excellent precision, creating a great sense of motion, weight and a smooth, flowing transition from panel to panel.  That helicopter crash was amazing; very cinematic stuff.  While I wouldn’t say this is quite up to the level of his work on “City at War”, it still looks very good (well, I probably could have done without Robot Baxter’s Buns of Steel, but that’s a nitpick).

I made a big hullabaloo last issue about all four Turtles finally reuniting for the first time this volume, and I’m sure everybody else reading the comic was excited for that, too.  Lawson pulls a fast one with this issue, though, as Raph is immediately separated from his brothers and the team is incomplete once again.  It was a nice bit of misdirection on Lawson’s part, dangling some expectations in front of you and then jerking them back at the last second.  The penultimate showdown with Baxter isn’t even a fair fight.  With all four Turtles “reuniting” in this issue, you probably expected to see them stand together for the first time in Volume 2 and show some classic teamwork.  Instead, they’re all bruised and beaten and Don’s part in the showdown consists of helping the wounded to safety.  Nobody gets more action in this issue and even he takes it on the chin for the most part.

Baxter’s been built up all volume and I think he lives up to his hype.  He terrorizes April and absolutely wrecks the Turtles in their first encounter.  A lucky shot from Raph is all that kept him from winning (and the interference from the cops).  And for a “lost” fight, he still manages to come out on top, causing Raph to disappear (to say nothing of the time-delayed doom he infected April with just prior).  Even after Baxter is defeated in the final confrontation, his actions in this arc will have lasting effects on the rest of Volume 2 and into Volume 4.

And to go off on a tangent, that’s one of the best qualities of the Mirage TMNT comic; that their major battles all had lasting ramifications that would continue to plague the Turtles even after the fight had finished.  We all know what happened when they killed the Shredder (twice) and how that came back to bite them.  And the same is true for their rematch with Baxter Stockman; the villain may be physically out of the picture but his presence lingers for years and years.  Barring the episodic fair from Tales of the TMNT and the “guest” issues of Volume 1, when it comes to arc-driven storytelling, there is no simple “bad guy dies/goes to jail and we call it a day” conclusion.  Everything the TMNT does has consequences often far worse than the initial ordeal.  In fact, “consequences”, I would dare say is the primary overarching theme of Mirage’s TMNT series.  Sooner or later, EVERYTHING comes back to bite them in the ass.

The Baxter Stockman arc of Volume 2 is almost over and the seeds have been planted for the next and final arc of Volume 2, but that’s a topic for another review.  I will say that the four primary arcs of Volume 2 each offer a lot of variety in tone and topic, so I’d like to think the entire volume is worth reading if you’re new to it.  Even if you don’t like it at the start or in the middle, you’re bound to find something enjoyable in at least 1 of the 4 major arcs.

Grade: B+ (as in, “By the way, Eric Vincent's colors look especially good in this issue.”)
Posted by TMNT Entity at 11:33 AM