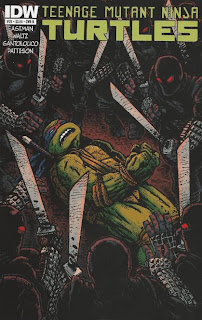 Racing through the streets, April, Angel, Splinter and Raph are anxious to get the grievously injured Casey to a hospital before he bleeds out.  They get him to the ER and he’s seen to by a number of doctors.  April checks to see if the coast is clear and then tells Splinter and Raph they can make their getaway.  Splinter and Raph have to rendezvous with Don and Mike at the lair to see if they found any trace of Leo.  Later, one of the doctors asks Angel how Casey got his apparent sword injury, but Angel blows the doctor off and just says “he was stabbed”.  The doctor is suspicious.

Meanwhile, the unconscious Leo is taken to Foot HQ.  Handing him off to Kitsune, Shredder dismisses Karai and Alopex.  Kitsune swears to Shredder that his ultimate destiny is within reach, then privately tends to Leo in her chambers. 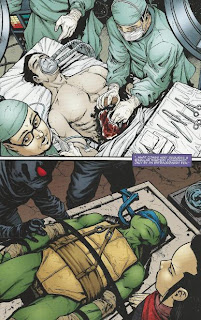 Back at the church lair, Splinter and the Turtles reconvene.  All Mike and Don were able to find were Leo’s discarded swords.  To their surprise, a message has been painted on the wall of the church.  It’s from Hob, who says he can help them and that they should meet him at the East River at midnight.  The Turtles are incredulous at Hob’s claim, but Splinter informs them that he’s their only lead.

Inside Kitsune’s chambers, she removes Leo’s bandana and begins working a spell.  Leo flashes back to his mutation, where a monstrous Splinter vows to keep him safe and offers him a blue bandana.  Suddenly, Leo is besieged by monstrous Mousers with Splinter not only refusing to help, but telling Leo he is a disappointment.  The Shredder suddenly appears and saves Leo.  He then tells him that a true sensei knows when to take action.  Shredder then tells Leo to continue on his journey.  Leo is next besieged by a horde of Foot Soldiers who unmask to become monster rats.  He’s cornered on a rooftop and thrown to his doom by a furious Splinter.  Leo is caught by the Shredder (dressed as a Foot Soldier), who tells him he needs to leave his weakness behind to find his true potential.  Leo moves onward.

At the hospital, April asks Angel how she knows Casey.  Angel exposits that their dads used to be friends, but when both their mothers died (from different circumstances), things changed.  Angel began running with the Purple Dragons and started down a dangerous path, but Casey managed to knock some sense into her and convinced her to go legit before she made a huge mistake.  The doctor interrupts and shows April and Angel into Casey’s room.  He says that he’s stabilized, but his injuries are so serious he’ll likely never play hockey again.  April wonders if Casey’s dad even knows.  Angel says that her father passed the news along to him, but she doubts the drunk even cares.  As it happens, Casey’s dad is standing right outside the door.  However, after hearing Angel’s words, he sullenly leaves without revealing himself.

Back in Leo’s mind-trip, he encounters Slash.  Leo desperately wants to defend himself, but Splinter reminds him that he killing is wrong and he must sheath his sword.  Leo dismisses Splinter’s teachings and strikes Slash down.  The Shredder tells Leo he was right to use all force necessary to defend himself and gives him Slash’s black bandana as a token of approval.  Leo continues on and relives his battle against Krang on Neutrino.  In the fight, Leo kills Krang, but it isn’t enough.  Krang is reborn as Splinter, who kills Leo’s brothers.  The Shredder tells Leo that Splinter has failed him at every turn and offers him the chance to join his true clan. 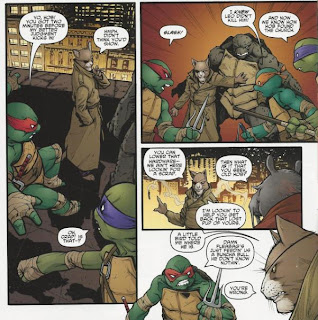 On a rooftop near the East River, the Turtles and Splinter meet up with Old Hob and Slash (hence how Hob knew of the church lair).  Hob says that a war between the humans is about to erupt across the city and that he wants to be aligned on the winning side.  Moreover, he wants the victors to be the mutants, not the cruel humans.  He offers the Turtles the chance to side with him.  As a token of sincerity, he even promises to lead them to Leonardo, whose whereabouts he learned through the grapevine.  Raph isn’t falling for it, but Splinter reminds him again that Hob is their only lead.  Splinter says that if Hob is being truthful, he’ll at least consider the alliance.

Leo enters the last leg of his mental quest, encountering Splinter in his harlequin disguise.  Leo finally confronts him and tells Splinter that he betrayed his sons, promising to protect them but only ever putting them in harm’s way.  Splinter says that he never considered any of them to be his sons, as his real sons are dead.  Don, Mike and Raph then rise from the grave and attack Leo, who snaps and chops them all to pieces.  Shredder then kills Splinter, calling Hamato Yoshi a failure.  Shredder asks Leo if he now sees the truth about Splinter.  Leo says that he does and joins Shredder’s side, calling him Master. 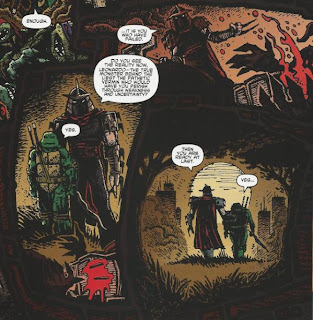 In the chamber at Foot HQ, Leo awakens as Kitsune holds the black bandana over him in triumph.

*The events of TMNT Villains Microseries #3: Old Hob take place during this issue, just before page 18.

*Flashback 2: Leo’s battle against the Foot and encounter with the incognito Shredder occurred in TMNT Microseries #4: Leonardo.

*This issue was originally published with a gallery of inked pages by Duncan, Campbell, Kuhn and Bates.

Well, that was a heck of a lot of story for 22 pages, wasn’t it?  And everyone says comics are too short, these days.

This issue effectively sells an idea that on the surface sounds pretty weak.  “Shredder brainwashes Leo into joining the Foot”.  The ole brain-washing scheme; what a reliable cliché.  And yet, it all comes down to the execution.  A talented creative team can MAKE a tired old Conflict 101 gimmick work if they can muster up an inventive or amusing means to deliver it.  And I think the IDW team accomplished just that.

A number of “neat” storytelling tools are employed to make this as exciting a read as possible.  The story opens up with a superb example of juxtaposition (I feel so smart whenever I use that word), as Casey’s and Leo’s predicaments are mirrored in content, conversation and layout.  Santolouco composes it wonderfully, but Waltz’s script deftly provides dialogue unique to each storyline, but wind up merging at the very end of the sequence into a line that tactfully applies to both starkly different scenarios.  It’s a 5-page sequence that sets the hectic mood of the story in a very inventive way that instantly draws you into the drama.

Then there are the warped flashbacks that make up Leo’s brainwashing.  This series of 5 two-page montages/spreads have to carry the burden of making Leo’s turn to the dark side believable.  As I said before, this is a pretty textbook cliché of a plot twist, so the deck is stacked against them.  In a lavish move on IDW’s part, each montage is drawn by the artist who drew the original issues Leo is seen flashing back to.  So not only do we get to see these familiar scenes rendered in a corrupted and twisted light, but we get to see them drawn by the artists who originally penciled them in the first place!

Like I said at the start of this review, making a cliché work all comes down to execution and I don’t think the guys at IDW could have pulled it off in a more visually exciting and satisfying way.  It was a treat to see all these guys come back for an acid-tripping jam session and they all put their backs into some dynamite two-page spreads. Sure, we’re all incredulous and cynical about Leo’s turn to the dark side and we all know it won’t be a permanent change for the character (though how long the transformation will last is a mystery).  But I’m willing to buy the drama of the conflict now, thanks entirely to how well the team pulled off such a stale old run of the mill plot contrivance.

As for the rest of the issue, that’s where things might get a bit weaker.  Angel’s info-dumping exposition was pretty painful, but I suppose there’s no other way to get around a back story summary like that.  At least it’s out of the way, now.  Hob’s storyline has me pumped, as hopefully it’ll mean we’re about to see a bunch of familiar mutants (he’s got a stash of mutagen and he wants to see mutants usurp humanity; you do the math).  Also, I’ve got to say I like how Santolouco draws him.  But then, I like how Santolouco draws just about everything.

Incidentally, I would like to point out something about the colors I couldn’t quite put my finger on before but just realized.  When reading “Secret History of the Foot Clan”, I really liked how “Irish” Santolouco made April look, with pasty white skin and freckles.  When Santolouco took over for the ongoing, I noticed April no longer had those stereotypical “Irish” features and in the back of my head something felt “off”.  Of course, it meant that I was wrong to credit Santolouco with April’s skin tone and freckles in “Secret History”, as that was all the work of the colorist: Joao Vieira.  The ongoing uses a different colorist, Ronda Pattison, hence the sudden change in April’s complexion.  Pattison does great work and I understand that every colorist needs to be free to put their own spin on the characters, but I DO wish April’s computer monitor tan and freckles would make a comeback.  They gave her look a bit of extra personality and made her stand out a bit more, but in a subtle way.

That’s just sort of a tangent, though.  Sorry.

Anyway, even if the idea of Leo “switching sides” had you groaning when it was announced, and even if my summary doesn’t convince you, I’d highly recommend grabbing the book and seeing how they pulled it off for yourself.  It’s nothing too terribly original, but the cavalcade of familiar artists was awesome and the visual pizzazz made it work, in my opinion.

Grade: A (as in, “Although the ‘our destiny’, ‘you mean MY destiny’ dialogue exchange was a bit of a Saturday Morning Cartoon groaner”.)
Posted by TMNT Entity at 7:35 PM