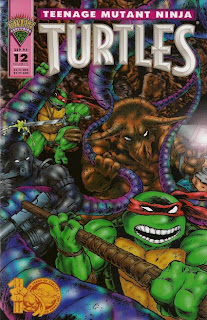 A Triceraton ship orbits Earth.  Navigation Officer Thrunknor informs the Commander that they’re in attack range, but that their life support, rations, manpower and weaponry are almost completely depleted.  Regardless, the Triceraton transmitter signal has begun sounding an SOS and they know precisely where their lost number is.  The Commander soliloquizes that when he and his crew were dispatched to follow the TMNT’s transmat beam from the Triceraton Homeworld into unknown space, he hadn’t counted on getting lost for years on end.  Even though they have next to no resources to launch an effective assault, the Commander is just glad that his mission will finally be over. 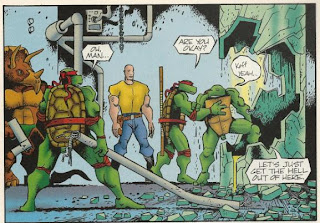 The groups reconvene and Leo says they’ve found an old bomb shelter that leads to a cave.  The cave ends at a cliff’s edge where a humongous starfish-like monster lurks down below.  Suddenly, the starfish launches a tentacle that spears Nobody and drags him down into its mouth.  Enraged, Casey (still thinking he’s Arnold Schwarzenegger), sets all of the explosives in Nobody’s discarded duffle bag and hurls them down into the pit.  The explosion injures the starfish, but causes the cave to collapse, trapping them inside. 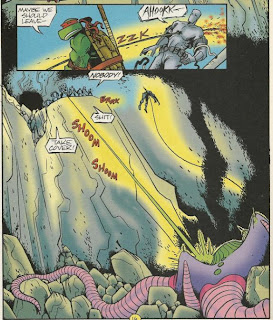 Leo spots a crack in the cave’s ceiling and says it’s their only way out.  They climb up through the hole, only to find themselves on the base’s tarmac, surrounded by choppers, tanks and hundreds of guards.

*The Triceraton unit has been following the transmat signal since TMNT (Vol. 1) #6.

*The true nature of the giant starfish monster and the final fate of Nobody will be revealed in Tales of the TMNT (Vol. 2) #60.

*This issue also featured a back cover pin-up of Raph, Don and Mike by Simon Bisley.

There are a lot of reasons this issue pissed me off, but I think the unifying factor amongst them is that everything happens so god damn flippantly.

Let’s start from the beginning.  The Triceratons follow the SOS to Earth and prepare for a wispy, suicide invasion.  That’s cool and all, but the back story is delivered through some horribly awkward exposition, as the Commander describes the situation to his Navigation Officer like its fucking news to him.  They’ve BOTH been adrift aimlessly in space for the past few years, waiting to die; the guy didn’t really need a long-winded reminder.  While exposition is sometimes a necessary evil, there are better ways to get it out there.  Maybe an internal monologue or something?  Anything.  Just not, “Hey random guy who already knows all this stuff I’m about to tell you, listen to my preposterously uncomfortable yarn…”

Then we have the big scene where the Turtles finally find their long lost brother Raph.  He’s in a tube.  They break the tube.  “Raph, you okay?”  “Sure.”  DONE.

There’s no drama or suspense to it; again, it’s thrown in rather flippantly.  Keep in mind that Raph being lost was the impetus for this entire arc and the main source of conflict.  It’s finally resolved and the Turtles are reunited, yet it just occurs in passing.  I know Volume 2 was running out of time due to an early cancellation, but hey, how about they gave the reunion the time it deserved and cut out a completely bullshit sequence that didn’t need to happen?  WHICH completely bullshit sequence that didn’t need to happen?  Ohhhhh, I thought you’d NEVER ask!

So Nobody dies.  Just like that.  No build up, no dialogue, scarcely any reflection from the characters… just one panel he’s there, the next he’s dead.  I get the feeling Lawson was trying to use Nobody’s death as a way of illustrating how high the stakes were; that any character could die at any second without notice or a minimum of fanfare.  But it’s just so stupid.

Look, if you want to kill off a character to make your readers stop and say, “Aw damn, shit just got REAL!” then fine.  Be that way.  But the death has no meaning to the reader if it means nothing to the characters.  There are a grand total of two reactions to Nobody’s death; the Turtles saying “shit” over and over again (one of the few times they swore in this comic) and Casey getting enraged and trying to blow the starfish up.  In regards to that last one, it might have had the capacity to be a powerful scene and show just how much Nobody’s senseless death affected the group… if Casey hadn’t been brainwashed into thinking he was Arnold Schwarzenegger.  Instead, Nobody’s death gets folded into a stupid joke that makes you roll your eyes and the whole sequence just feels pointless and grating.

It’s not like Nobody was a great character or that I was really attached to him.  But they’d been doing a lot of work on him toward the end of Vol. 1 and in Vol. 2, like they were trying to shape him into a worthwhile supporting character.  And even though he was little more than background filler throughout most of Vol. 2, he had a great part during “Shades of Grey” in Vol. 1.  And even when his personality during Vol. 2 was amounting to so much cardboard, he was still contributing to the story in his own unique way (using his police connections to help in the search for Raph, etc).  And I think that’s why it feels like such a waste to have thrown him out like that.  The Mirage Turtles didn’t have a very impressive collection of supporting characters and Nobody had been improving to the point of becoming a worthwhile inclusion.  Then he dies a death with less gravitas and impact than the death of the Chinarian a few pages earlier.

Grade: F (as in, “For the love of god, if only Nobody had put up as much of a fight in the actual issue as he does on the cover, this might not have been so terrible”.)
Posted by TMNT Entity at 11:00 AM