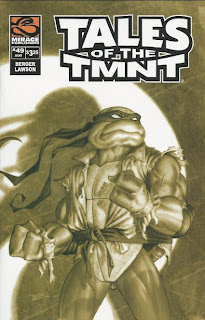 Frontispiece: Braunze, Don and Raph stand together.  Braunze thinks to himself just what a hero is.  It can’t be as simply defined as an individual who strives for the greater good, as many historical villains felt that their actions were righteous.  In the end, he concludes that he doesn’t have the answer, as even though he believes in good and evil, his perception of them is cloudy, at best…

Down in the alleys, Braunze is being chased by a pair of DARPA agents wearing helmets that block his psychic attacks.  Braunze radios his associate, Nun, telling her to keep an eye on Alexia and to wait for his next order. 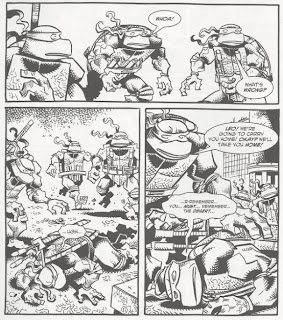 On the roof of April’s building, the Turtles go about various activities when suddenly Leo has a dizzy spell and collapses.  His brothers rush him inside.

Back in the alleys, the two DARPA agents split up.  Braunze manages to take them both out with his stun gun.  Removing the helmet from one of the guards, he demands answers.

In the apartment, Leo comes to, mumbling about Nevada.  Casey tells Raph that Leo was going on about Nevada earlier that afternoon.

In the alleys again, Braunze is interrupted by the head honcho of the scheme: A little Asian girl named Khiyarra.  She tells Braunze that she used her own psychic powers to take control of the DARPA agents; that no one at DARPA has recovered from Braunze’s massive mind-wipe.  So far as DARPA is concerned, Braunze died in an explosion and they know nothing of the Turtles.  Khiyarra set the entire encounter up to get revenge for her mentor, Alexia, whom Braunze killed (and used the entire DARPA incident as a means to cover up her death).  Braunze tries to reason with Khiyarra, telling her that Alexia had been corrupted by her own power and left him no choice, but Khiyarra isn’t listening.  Secretly, Braunze presses a button on his back.

Fully waking up, Leo tells his brothers all about their adventure in Nevada at the DARPA facility, but they have no memory of it.  So far as they’re concerned, after their fight with Baxter’s robot, they collected the injured Raphael and went straight home.  Leo says that Braunze changed their memories, and furthermore, he actually saw Braunze watching him from the street earlier that day.  Suddenly, Don gets a message on his P wave scanner, reading “Send Help Braunze” in Morse code.  Leo tells Don to trace the signal. 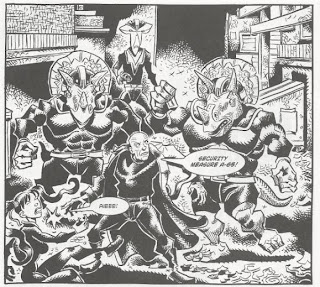 Khiyarra subdues Braunze with her telekinesis, but Braunze proves a stronger opponent and resists.  He offers Khiyarra the chance to join his group of “mutants” and reveals that he didn’t actually kill Alexia.  Khiyarra refuses to believe him, though, and calls in her reinforcements: Tiabak (Braunze’s purple alien friend with the hammer-head from Vol. 2) and two Triceraton soldiers (left behind after the Triceraton attack on the DARPA facility).  Khiyarra has brainwashed them into following her orders and fitted them with helmets to block psychic attacks.  Braunze is in trouble, at least until the Turtles arrive.  They handily defeat the aliens and demand answers.

Braunze apologizes for wiping their memories, saying that it was a last second decision and he had no other choice.  He compliments Leo on his mental strength, as the Turtle actually restored his own memories without Braunze’s help through force of will.  Two of Braunze’s “mutants” show up (Bacon and Joni) and order Renee to bring in the chopper to clean up all the alien mess.  Braunze shakes Leo’s hand and promises that once he’s put Khiyarra away and gotten everything settled, he’ll return to make amends over a more amicable meeting.  Leo accepts his offer.

In some sort of psychic void, Braunze tells Khiyarra that he has her imprisoned for her own good.  Her mentor, Alexia, had corrupted her, but with rehabilitation she can be taught to use her powers for the betterment of mankind.  Khiyarra rebels, so Braunze offers a token of good faith: Alexia.  Khiyarra and Alexia are reunited, with Braunze reassuring Khiyarra that he didn’t kill her mentor.  He tells them both that if they work together, they can “destroy the id” and better themselves. 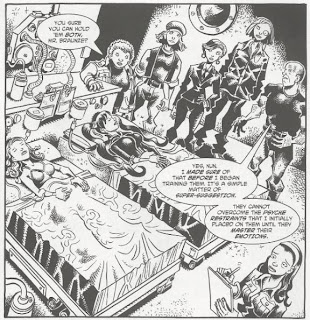 In the physical world, Khiyarra and Alexia’s bodies are hooked up to some medical gear while their minds rehabilitate in the psychic realm.  Nun wonders if their facility is equipped to hold two powerful psychics, and Braunze assured her that the psyche restraints won’t break until both have mastered their emotions.  Joni is impressed with Braunze’s work, while Nun is confused.  Bacon verbally browbeats Nun and the pair argue until the comic ends (revealing a small, secret base in the middle of nowhere).

*Braunze wiped the TMNT’s and Casey’s memories of the DARPA incident in TMNT (Vol. 2) #13.  This issue picks up immediately where TMNT Volume 2 left off.

*According to Dan Berger’s foreword in this issue, Braunze was originally conceived as an homage to Doc Savage, though that aspect of his character never made it through during TMNT (Vol. 2).  As such, this issue is a throwback to the Lester Dent character.

*This issue was originally published with a bonus pin up, “Goongala Goongala!” by Alex Deligiannis.

If Volume Two had a mess of an ending, this issue doesn’t do a very good job of cleaning the whole thing up.  In the foreword by Berger, he says that this “epilogue” was intended to answer all the lingering questions left after Volume Two’s hasty conclusion, but “Mined Games” hardly addresses anything in need of answering.  Really, all it aims to clear up is “whether the Turtles actually fought aliens at DARPA” or not, and I never felt that was even a matter of confusion.  Volume Two ends with Leo having vague memories of the battle in Nevada and Braunze (the psychic guy previously shown to be able to alter minds) watching the Turtles from the streets with a smirk on his face.  Did anybody really think “the end of Volume Two was just a dream” even after that last sequence?  I don’t know how they could.

Really, all “Mined Games” actually accomplishes is restoring the TMNT’s memories of their battle in DARPA.  Or, rather, Leo restores his own memories, with Braunze promising to come back later and help everybody else out.  I guess it’s something.

As for the rest of this issue, holy shit, WHAT?  It’s nothing but a barrage of gibberish as Braunze is caught mid-story running from his own villains, yakking with his own supporting cast and referencing his own adventures that none of us reading Tales of the TMNT have ever heard of!  I mean, I get the intent of it; that Braunze is really this totally cool action hero with his own cast of totally cool teammates and having survived a bunch of totally cool adventures in his time… but who the fuck CARES?  This is a Ninja Turtle comic, not a Mr. Braunze comic.

The story is referencing events we’ve never seen or even heard of, with the characters going on and on about it like it shouldn’t be news to the reader.  Yeah yeah, the aforementioned intent that “Braunze has his own adventures outside of encounters with the TMNT”, but you know what?  How can we be expected to care about any of these characters or any of their stories if we’ve never read or experienced any of the events so frequently referenced?  All this shit about Alexia being this incredibly important individual and Khiyarra going on about the suffering she endured when she lost her mentor… But I don’t care.  This is the first time I’ve ever even heard of these characters, the first time ANYONE has, so how can we make any sort of emotional connection with them?

Worst of all is the end, when Braunze’s gaggle of all-female teammates start exchanging crude “shtick” back and forth.  It seems meant to show that these characters have diverse personalities and gimmicky relationships with one another, but again, this is the first and only time we ever see them.  It just rubs off as cheap one-note writing in lieu of actual personalities (the British one wears a monocle and speaks in verbose alliteration because she’s British so of course).

Berger claims that he wrote this issue as a love letter to the Doc Savage comics (Braunze is even referred to as “Doc” by Nun at one point), so maybe I’m just not “getting” it because I’ve never read a Doc Savage comic in my life.  Whatever the case may be, the whole story is as big a mess in 30 pages as the DARPA arc was in 4 full issues.  In the end, it accomplishes very little and the story has next to nothing to do with the TMNT; they’re reduced to making cameo appearances in their own comic book just so Braunze and his stable of nobodies can steal the show.

Grade: F (as in, “Foul as the issue may be, Michael Dooney’s cover is pretty great”.)
Posted by TMNT Entity at 4:38 PM