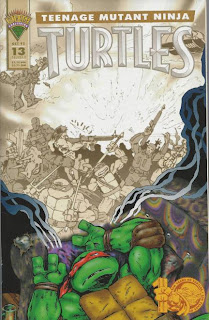 Leonardo ducks back inside the cave as the guards on the tarmac open fire.  The Turtles, Braunze, the purple alien and the Triceraton realize that they’re cornered and are out of options.  Suddenly, they hear a noise and Donatello takes a peek to see what’s going on.  Triceraton attack ships are strafing the DARPA base and attacking the guards.  In the midst of the chaos, the Turtles escape the cave and agree to regroup at the end of the airstrip. 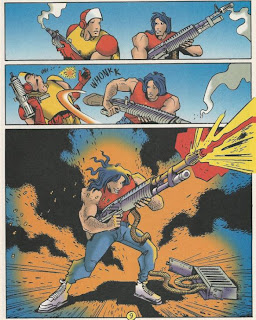 Up in the Triceraton asteroid ship, the Commander tells his Navigation Officer to set the ship for a collision course with the DARPA base.  Their ship is already doomed from being adrift in space for years and their failure in battle is assured.  Still, the Commander wants to die with honor. 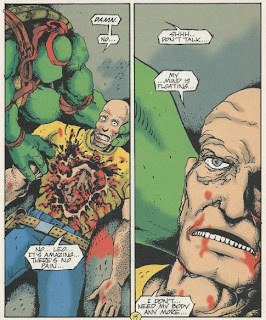 On the airstrip, everyone fights their way through the carnage and regroups.  Suddenly, Braunze reads the Triceraton’s thoughts and realizes he’s the one who called in the attack and has been deceiving them all along.  The Triceraton shoots Braunze, leaving a huge hole in his torso.  Dying, Braunze tells Leo that the Triceraton asteroid ship is on a collision course with the base and the explosion will kill thousands.  He tells them to flee as far and as fast as they can, then dies.  The Triceraton gloats that his people will invade and conquer the Earth.  However, he fails to notice one of the Triceraton attack ships fall apart just above him; a piece of debris falling on and crushing him.

The purple alien tells Leo that there may be a weapon back in the base that can stop the Triceraton asteroid ship from impacting with the Earth.  Leo offers to go back with the alien, but he refuses and takes a Jeep by himself.  With no choice, the Turtles and Casey flee the base.  In the Jeep, Braunze appears next to the alien; his entire death having been a telepathic ruse.  The alien tells Braunze that the “inter-phasic cannon” within the base can cause the Triceraton ship to phase through the Earth’s crust and dissolve in the molten core… if they can get to it in time.  Braunze is pleased, saying that after they’ve stopped the ship, all that will be left to do is wipe the TMNT’s memories of this entire fiasco (claiming that it’s “safer that way”).  As the Turtles and Casey run, the ship crashes.  They’re immediately engulfed in a fireball and disintegrated. 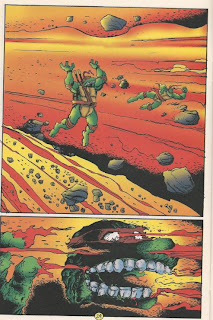 Leo awakens on the couch in April’s apartment.  Shadow is playing video games and Casey is cleaning up her toys.  Confused, Leo asks when they all got back from Nevada.  Casey laughs and tells Leo that none of them have ever even been to Nevada; he must have been dreaming.  Leo picks up Shadow and holds her in his arms.  He looks out the window, trying hard to remember.  Meanwhile, a mysterious man (Braunze) looks at him and smiles, silently bidding him goodbye.

*This story is continued from TMNT (Vol. 2) #12.  From here, continuity branches in two directions:

**The story continues in TMNT (Vol. 3) #1.  When originally written, the Image series was the official continuation of the Mirage TMNT universe and carried over a number of plot points.  However, it was later retconned from canonicity.

**The story continues in TMNT (Vol. 4) #1.  This picks up many years later with issues of Tales of the TMNT (Vol. 2) filling in the missing time.  For a listing of those issues, see my Mirage TMNT Continuity Timeline.

*The Turtles and Casey will meet Braunze again and have their memories of the DARPA battle restored in Tales of the TMNT (Vol. 2) #49.

*This issue was originally published with a 2-page interview with Erik Larsen conducted by Michael Dooney regarding the future of the TMNT with Image Comics.

Volume 2 is such a disappointing read.  It starts out strong with an arc of introspective character pieces, as the Turtles ponder where they will go with their lives now that their blood debt to the Foot Clan has been terminated.  There’s a lot of talk about “what if” and as a reader you’re completely engrossed in those questions and potential outcomes.

During the Baxter Stockman arc, the book takes a heel turn away from all the fascinating character work and just becomes a whole lot of dull action stuff.  While it was enjoyable during the Baxter arc because it fulfilled a long simmering plot thread, the DARPA arc is just a whole lot of running around shooting things with minimal characterization for anybody.  I get the feeling that behind the scenes nonsense might have been a participating culprit in this mess of an ending, Lawson essentially being told to forget about his longform storylines and wrap everything up neatly in four issues, but that doesn’t make it any less of a boring, often painful read.

The whole volume just peters out at the end after getting off to such a strong start.  I sometimes wonder what COULD have been, had fortunes been kinder back in ’94 - ‘95.  What if Lawson HAD been allowed to tell his longform stories?  Would we have gotten fulfillment on all those character arcs he set up at the beginning?  Would everyone have grown and changed as much as it was implied they would?

Moot questions, I suppose, as what’s done is done.  This is the ending we wound up getting and it pretty well sucked.  Once again, the loss of Eric Talbot’s inks really kills the thing on a visual level and Eric Vincent’s colors do not mesh with Lawson’s self-inked work.

Sadly, the abrupt and unsatisfying conclusion to this Volume 2 would only be the beginning of a trend.  Image’s Volume 3 would also end with its lingering plot threads unconcluded (at the time, anyway).  Volume 4, as of this writing, is STILL on “indefinite hiatus” with all its storylines dangling in space.  Tales of the TMNT (Vol. 2) began a number of multi-issue narratives: The Gang War, the Tang Amaya storyline, the machinations of the Foot Mystics.  And none of those arcs would be concluded, either, by the time that book was over.

From this point on, Mirage’s TMNT comics never, EVER finish what they start and it will become very tedious and very frustrating.  I’m not meaning to be all gloom and doom here, as there are still PLENTY of solid, exciting, A-list Turtles stories from Mirage to look forward to, post Volume 2.  Just don’t expect any of their longform storylines to ever offer a satisfying conclusion.

Grade: F (as in, “For what it’s worth, the interview with Erik Larsen in the back of the book is good for a laugh.  He sounds SO excited about disfiguring the Turtles and killing off long established characters.  Seriously, he brags about those things.  Ahhhhh, the ‘90s…”)
Posted by TMNT Entity at 9:06 PM