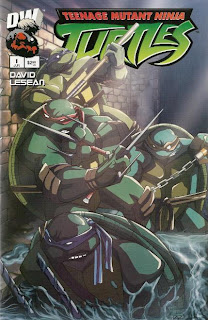 Fifteen years ago.  Two little kids (Johnny and Frank) are getting their photos taken in a booth.  Johnny wants each of them to keep one of the pics so that they’ll always remember that they’re best buddies for life or something.  Suddenly, a nearby truck gets blindsided by a car and a canister of ooze comes rolling out.  It hits a bowl of four baby turtles and sends them careening down a storm drain.  Johnny wants to go down and steal the turtles, while Frank wants to help the guy in the truck in case he’s been hurt.  A stranger walks past and is impressed with Johnny’s self-interested attitude.  He tells the kid to look up the Purple Dragons when he’s a little bit older. 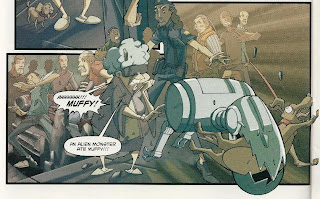 The present.  Frank is a rookie cop, enjoying his first day on the job.  Walking his beat, he’s shocked when a robot (a Mouser) appears from below ground and snatches on old lady’s dog.  Frank grabs the leash, but is dragged into the street (past his superior officer, Sarge, who thinks Frank is putting on a show).  The robot drops the dog and Frank is nearly run down by an armored car.  He glimpses into the vehicle and thinks he sees Johnny driving.  It IS Johnny, who is now a Purple Dragon, but Johnny pretends like he’s never seen Frank before.  Frank returns the dog to the old lady, unaware of four strange figures leaping across the rooftops overhead.

Later, Johnny and the Purple Dragons shake down a store owner for some cash, stuffing it into the back of the armored car (unaware they’d just locked Raphael inside).  Two Ton (one of the Dragons) asks Johnny what the guy who hired them to do the job is like.  Johnny says he’s really scary but organized and will likely take them straight to the top.  Driving off, they pass Frank and Sarge in their squad car.  Frank wants to give chase, but Sarge insists the armored car did nothing illegal. 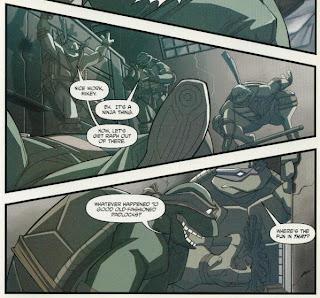 Elsewhere, the Purple Dragons park in an alley to deliver the case.  They’re confronted by Leonardo and Michelangelo, who start beating on them while Donatello picks the lock to the armored car to free Raph.  The Purple Dragons gang up on the Turtles, but prove no match for the ninja.  A unit of Foot Soldiers arrive and the fight looks like it’s about to really get started.

Not far away, Frank is whining to Sarge when the armored car (being driven by the Turtles) comes roaring by.  Leo throws the stolen money at the cops and the Turtles disappear. 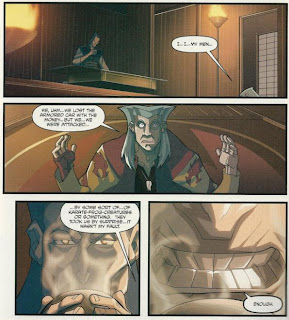 At Foot HQ, Johnny desperately tries to explain himself to his employer, Oroku Saki.  Saki tells Johnny he will never have the chance to fail him again and rises from his seat.  As the doors close, Johnny screams in agony.

Back in the alley where the Turtles fought the Foot, Frank and Sarge are doing some investigating.  Sarge thinks it’s a waste of time, as who care about a bunch of gang members, anyway?  Looking around, Frank passes over the old photo of him and Johnny as kids.  He looks at it and realizes that… things change.

*The story is continued in TMNT (Dreamwave) #2.

*This issue is an adaptation of the first episode of the 4Kids TMNT animated series, “Things Change”.

*This issue was originally published with a 4-page preview of NecroWar #1.  Like anybody gives a shit.

*This issue was originally published with a variant cover by Pat Lee.

Oh great.  The Dreamwave series.  Might as well get this shit out of the way; it’s been lingering over my head for long enough.

I’m a bit conflicted about Peter David’s approach to this series.  I’m sure he was under some mandate from 4Kids Entertainment to make the comic a tie-in to their animated series, and that usually means dull episode adaptations.  So to David’s credit, while he adapts the episodes from the cartoon, he tries to show them from the perspective of different characters involved, so it’s still a “new” story.  Sometimes it works okay, as when episodes are seen through the eyes of recognizable characters like Baxter Stockman, and sometimes… we get the episodes through the eyes of nameless generics.

For those who have seen the episode “Things Change”, Johnny is the lead Purple Dragon with the blue hair and Frank is the cop designed after Kevin Eastman (while Sarge is the cop designed after Peter Laird).  While I think David might have been onto something with his “same story, different POV” approach, the fact remains that I bought this comic for the Teenage Mutant Ninja Turtles… not a couple of nobodies whose animation models probably didn’t even have names.  This is the very first issue of the series, meant to grab readers who want to relax with some TMNT action.  What they receive instead is the trite life story of two characters nobody gives a shit about.

And even the back story for Frank and Johnny is pretty awful.  The dialogue is stilted and insincere, as Johnny drops “best buddies for life” phrases incessantly, then goes off on some awkward rant about “looking out for number one if you want to make it in the big city”.  It’s way too clunky to make me care about these characters whom the issue is focusing on (again, this is the first issue of a Teenage Mutant Ninja Turtles comic and it’s not even about the Turtles).

Speaking of the Turtles, since the actual episode of the cartoon this issue is supplementing is told from their POV, they hardly play into the plot of the story.  It is just assumed on David’s part that anybody reading the comic will have seen the cartoon, so he doesn’t bother trying to string their narrative together coherently.  One minute they’re jumping along the rooftop, the next Raph is in the back of the armored car somehow, then Raph and Mikey are arguing over something that David didn’t even bother to show in this issue, then the Foot Soldiers show up for a fight, then we skip the fight and it’s the Turtles just driving away.

There’s a LOT of narrative disconnect from their side of the story, and if you haven’t seen the cartoon, you won’t be able to “fill in the blanks” on your own.

As for Thomas’s art, well, this is Dreamwave we’re talking about.  One of the major problems they had (besides Pat Lee’s lack of business ethics) was a tendency to absolutely positively DROWN their line art in computer coloring and photoshop effects.  Picking out what’s going on in the line art can be a major hassle, as the colorists are competing with the penciler for the reader’s attention.  I’m sure being a colorist isn’t the most gratifying occupation in the comics world (right up there with letterer), but you’re there to complement the line art, not try to show it up.

But if you can fight your way through the lense flares and make it to Thomas’s lines, then you’ll be met with some other obstacles.  Thomas is an artist who puts “style” above “fundamentals”, so while he tries his best to make things look dynamic, he can’t get so much as a limp grasp on basic principles such as “scale” and “perspective”.  Just look at the truly awful attempt at foreshortening on Johnny’s hands on page 2.

It also seems evident that Thomas drew the characters and the backgrounds wholly separate from one another, then tried to combine them on his tablet after the fact.  So you end up with characters who don’t appear to be in the same plane of existence as the environments they’re supposedly standing on (look at the page where the Mouser bursts out of the ground and grabs the dog; the people in the background are just floating).  Cut and paste some clip art onto a photograph and tell me how that works out for you.

Anyway, the Dreamwave series is just bad.  From its very conception, it is incapable of standing on its own (you HAVE to have seen the 4Kids cartoon to read this comic) and while it earns points for a creative approach to storytelling, for the last time, people buy Ninja Turtles comics to read about the Ninja Turtles!

Grade: F (as in, “Frank, if you wanted an excuse to convince Sarge to pull the armored car over, you could have mentioned its complete lack of license plates.  Either Thomas forgot to draw them or the colorists drowned them out in photoshop effects”.)