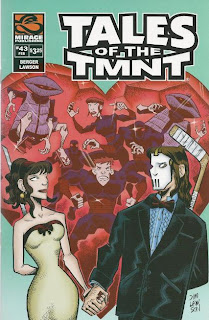 Frontispiece: In some dank pit, a Gollum-like creature shows off a ring which he covets.  The creature goes on and on about how life is a circle; that everything you do will eventually come right back around to you.  His whole life has been like that, he reflects…

At Foot HQ, Casey’s cousin Sid has joined as an initiate.  Scrubbing floors, he bemoans his lack of ascent amongst the ranks and begins bad-mouthing the Clan.  Two Foot Soldiers overhear him and start giving him a hard time.  Once they’re done, they storm off, mentioning that Mistress Karai has a new mission: To find a ring with a heart-shaped ruby called the Heartstone, a talisman of immortality.  Hearing this, Sid remembers that his grandmother had a ring like that and left it to Casey.  Sid sees this as his chance to win favor with Karai. 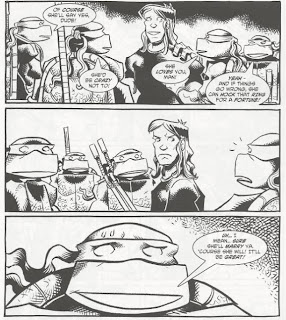 Down in the sewer lair, Casey is a nervous wreck.  He plans to propose to April and give her the heart-shaped ring his grandmother left him.  The Turtles try to tell Casey to relax, that he has nothing to worry about.  Suddenly, Casey gets a call on his cell phone from Sid, asking about the ring.  Casey angrily tells Sid he plans to give the ring to April at the farmhouse and to never to talk to him again.  At Foot HQ, Sid tells Karai that he knows precisely where his cousin will be with the ring.  Karai warns him that he had better not be mistaken.

As Casey and April head to Northampton (with April seeming rather wise to Casey’s scheme), the Turtles decide they’d better go along and help their buddy out.  Splinter gives them a suit which he tailored himself and offers to watch Shadow while they’re away.  The Turtles hope a train and ride the rails to Northampton.  Meanwhile, Karai and the Foot close in via helicopter.

Arriving at the farmhouse, Casey invites April out to the woods for a little picnic, unaware that they’re being watched by Foot Soldiers.  Settling down to eat, Casey tries to express himself to April, but he gets so nervous that he has to run off and empty his bladder.  As he does so, the Turtles sneak up on him and try to tell him not to spaz out.  They give Casey to suit so he’ll look dashing on his return (and save some face).  Casey returns to April, takes a knee and pulls out the ring, proposing. 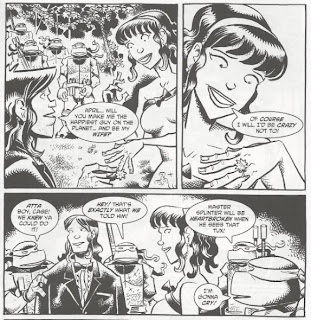 Suddenly, the Foot attack.  A Foot Mystic secures the Heartstone and Sid confronts Casey.  Before things can get too heated, the Turtles show up and tell Karai that by attacking their friend, she’s breaking their truce.  Karai says that as long as they have the Heartstone, they’ve no more reason to be there and the Foot Clan vanishes.  Casey is bummed that he now no longer has a ring to propose to April with, but she tells him that she doesn’t need one.  Still, he wants to slip *something* on her finger, so April ties a dandelion into a loop.  Casey pops the question and April agrees. 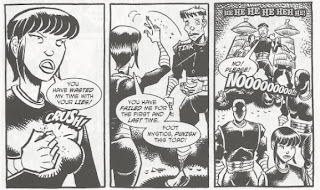 Back at Foot HQ, Karai inspects the Heartstone and learns that it’s a worthless fake made from paste.  She crushes the stone, throws the ring at Sid and orders the Foot Mystics to punish him.  The Mystics proceed to use various magical torture methods on Sid, but despite their best efforts, they cannot kill him.  Now nothing but a small, twisted, Gollum-like creature, Sid is thrown in a prison cell for the rest of his life.  Clutching the ring, Sid realizes that it was never the Heartstone that granted immortality, but the ring-itself.

*Due to Shadow’s age (and according to the editorial note from Dan Berger), this issue must be shortly after TMNT (Vol. 2) #13.

*Although Casey and April become engaged in this issue, many years will pass before they finally tie the knot.  Tales of the TMNT (Vol. 2) #67 takes place 3 years after this issue and April is still Casey’s girlfriend in that story.  They won't finally be addressed as married until TMNT (Vol. 4) #1.

*In the foreword for this issue, Berger says that Peter Laird had intended to plot a follow-up to this issue, showing us April and Casey’s wedding.  The story was never produced.

*The Foot Mystics which appear in this issue are designed after the Foot Mystics from the 4Kids TMNT animated series.  Another Mystic bearing this design (the basket head) will appear in "One's Shadow!".

*This issue was originally published with a bonus pin-up, “Utroms in Love” by Dan Berger.

“The Proposal” is an important story in regards to the growth of April and Casey, but from a narrative standpoint it relies on a lot of stupid coincidences to move the plot along.  Casey’s cousin Sid happens to have joined the Foot Clan.  Casey’s grandmother just happens to have inherited the Heartstone which Karai just suddenly decided she wanted (for no explained reason other than “POWER!!!”).

Then there’s the stupidity of Casey telling Sid over the phone the exact time and place where he can be found with the ring in his possession.  I think that last bit bugged me more than the string of coincidences that tied Casey, Sid and the Foot together.  “What?  Of course I have the valuable object you’re asking about!  I’ll have it in my pocket at 3:30 in the afternoon this Saturday in the backyard of the farmhouse in Northampton.  Did you get all that?  Good.  Now leave me alone because I never want to see you again!”

Sheesh.  I mean, I know Casey isn’t exactly a genius, but that sort of stupidity was more in-line with his borderline mentally handicapped 4Kids counterpart.

On the subject of Sid, I’d completely forgotten he was in this story until I reread it this afternoon.  While it was “neat” to see him dredged up from the depths of obscurity (having only made one appearance before this issue), I really didn’t care what his ultimate fate in the Mirage universe was.  It’s not like Sid was a particularly enthralling character to begin with.

Karai’s portrayal in this issue made me cock an eyebrow more than anybody else’s.  She’s ruthless, cruel and has zero tolerance for failure.  When was she ever like THAT in the Mirage TMNT comics?  During “City at War”, she was far more level headed than Oroku Saki ever was, distinguishing her from her predecessor.  In fact, she was rather accommodating and willing to compromise.  Yeah, she was the leader of a global crime syndicate, but having a newbie mystically shrunk into a freakish creature and then thrown in a jailcell for the rest of his life just because he failed?  That really didn’t seem like something she’d do at all.

Maybe if there were some other precedent of her behaving with such monstrous ferocity in another Mirage TMNT comic it wouldn’t seem so glaringly out of place, but save for Tales of the TMNT (Vol. 2) #40 where she’s a senile old woman referencing stuff that never happened, there’s just nothing to compare this to.  In “City at War” she’s fair, generous and capable of love (grieving over her dead daughter).  In Volume 4, she’s mysterious and up to something, but a far cry from a psycho.  But in this story, she’s pure evil and that just isn’t right.

Maybe she was having an off day?

At least April seemed to be right on the money in this story.  From the second she steps into the issue, she’s suspicious of Casey’s weekend trip and seems to have a good idea as to what he has planned.  April’s supposed to be very intelligent in the Mirage comics, so it makes sense that she’d be able to see through Casey without any trouble.  And hey, it’s nice that she isn’t wallpaper for a change.

Anyhow, “The Proposal” is a nice chapter in the developing romance between April and Casey, if not a particularly well-written story.  Laird never followed through on the sequel teased during the foreword that would have shown us the wedding, but then, Tales of the TMNT (Vol. 2) rarely EVER followed through on its proposed sequels.  There are some cute moments in here, such as the Turtles trying to help Casey out, and Casey’s fumbling at popping the question wasn’t even remotely as obnoxious as when he did it in the 4Kids cartoon.  But other than that… eh.

Grade: C- (as in, “Cousin Sid was another casualty of Laird’s Gollum obsession during the ‘00s.  For more, see the talking velociraptors from Vol. 4”.)
Posted by TMNT Entity at 3:10 PM