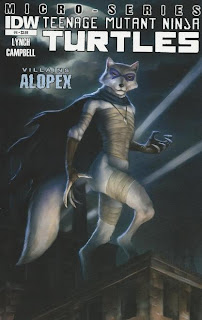 Mutant arctic fox and Foot assassin Alopex watches over a New York high rise where a deal is going down.  Four rogue Foot Soldiers are selling trade secrets to a “ninja wannabe” in a business suit.  Alopex considers the Foot Clan to be her family and isn’t about to let that happen.  She crashes through the window, knocking out the “ninja wannabe” and confronting the four traitors.  She offers them each a weapon (a bo, twin katana, nunchakus and a pair of sai) and says that killing them as they fight with those weapons would be good “practice” for her.  She then puts on a blindfold and attacks.  As she slays each Foot Soldier, she imagines them to be one of the Turtles.  Finally, she takes on the one with the sai.  He begs for his life, but she tells him “there is no escape from the Foot” and kills him. 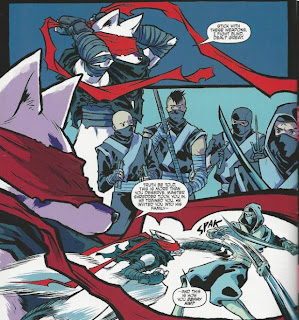 Back at Foot HQ, tensions are high.  The Foot Clan is at war and being attacked from all sides.  Alopex is called into the Shredder’s chamber and given new orders.  She is to destroy a research facility in Fairbanks, Alaska.  Alopex recognizes it as the facility where she was captured as a normal fox and experimented on; mutating her into what she is today.  It was the Foot Clan who saved her and trained her to be an assassin.

Alopex arrives at the abandoned facility and, with the Shredder’s permission, takes point.  She sets explosive charges, but is suddenly gripped with nostalgia.  Alopex remembers her family from when she was just a fox.  She was the hunter and gatherer for the family and was the toughest predator in the forest.  Toughest save for a mammoth polar bear, who terrorized her and all other animals in the forest.  Alopex catches a glimpse of one of her old family members, but it scurries away in fright.  She then smells something in the wind and races back to the landing zone. 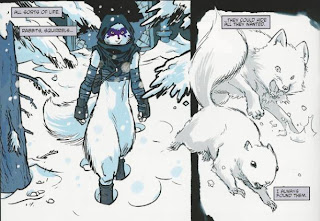 Alopex finds the Shredder ordering his Foot Soldiers to raze the entire forest, killing everything in it… including Alopex’s old family.  Shredder tells her that she is to be promoted to a Chunin of the Foot Clan.  But before she can accept the role in her new family, her old family must be destroyed.  Enraged, Alopex attacks Shredder and slashes him across the mouth.  Shredder is impressed that she was able to draw blood, but feels she needs to be reminded of her place.  He quickly takes her down.  He then tells her that mutating a fox was his idea, as he admires the creatures, and that she owes everything to him.  Alopex concedes defeat and takes Shredder’s hand, knowing full well that there is no escape from the Foot Clan. 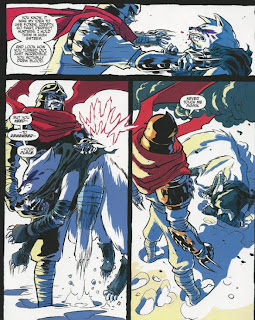 Flying off in the chopper, Alopex watches the forest burn below.  She vows to herself that she will fight by the Shredder’s side and serve him well, but she realizes what he is.  He is the bear.  And she promises that some day, she will kill him.

*This issue takes place between TMNT (IDW) #24 and TMNT Villains Micro-Series #5: Karai (as recommended by editor Bobby Curnow on the Technodrome Forums).

*Though it isn’t stated, the “ninja wannabe” may be a member of the Savate ninja gang at war with the Foot.

*This issue was originally published with 2 variant covers: Regular Cover by Tyler Walpole, and Cover RI by Campbell.

*This issue was dedicated to the memory of Franco Urru, artist of TMNT Micro-Series #1: Raphael, the comic that introduced Alopex.

Alopex has been hanging around for a year and a half now, yet we’ve known so little about her.  Heck, lack of a concrete origin has been the least of her problems.  A year and a half and Alopex has yet to develop so much as a personality!

This installment in the Villains Microseries endeavors to rectify that oversight and accomplishes a so-so job.  We now know the full measure of her back story, but a personality…?  IDW’s still working on it.

For the past year and a half, Alopex has been Shredder’s right-hand thug and amounted to little more than a shallow henchwoman.  We now know what her motivations are (a misplaced sense of “family”) and she now has something approaching ambition (to kill the Shredder), and that goes a long way in giving her character, but a personality?  Alopex is just so dry and boring.  There’s nothing quirky or unusual about her, nor does she have any noteworthy dynamics with other characters in the book (beyond a generic “wants to overthrow the leader of the bad guys” shtick).  A Microseries like this is nice and all, but she really needs to be given time to develop in the ongoing series if IDW ever wants her to become more than just a flimsy henchwoman.  And that might mean taking a break from the six bajillion ongoing, intersecting storylines long enough to stop and develop a character (I love the complex narrative tapestry you’re weaving, IDW, but your characters are beginning to get lost in all the story).

Perhaps I’m being a shade unfair.  There are glimpses into a more interesting Alopex in this Microseries; she certainly is put through an emotional wringer and she has a crisis of conscience.  But more than that, I think what attracted my attention the most was the brief moment where she reflects on her cockiness as a “kid” (a normal fox).  While the bear represented a dangerous adversary, I think what it meant more to her was that it represented humility.  The bear was more powerful than she was, she had to plan her life according to its whims and no matter how great she thought she was, the bear was always higher up on the food chain.  And, as is so plainly stated at the end of this book, the Shredder is the new “bear” in her life.  Yes, he killed her family and is the one who had her experimented on in the lab, but I think what upsets her more is that he humbles her.  Alopex strikes me as being very proud and having to “suck it up” doesn’t agree with her.

That’s what I took away from the issue, anyhow.  It might be interesting to see Waltz or Burnham or Lynch or whoever run with the idea of an arrogant and resentful Alopex.  At the very least, it would give her a personality, and damn but she could use one.

Ross Campbell returns for art duties and he’s certainly a sight for sore eyes.  He’s one of the best talents in IDW’s stable, but one they don’t seem to find enough opportunities to utilize.  His rendition of Alopex is very different from the portrayal other artists have been giving her.  Folks like Santolouco tend to emphasis her viciousness, making her snarling and ferocious, but Campbell’s interpretation is highly reserved and, well, cute.  Also, really fluffy.  The approach works in its own way, as it makes her appear less like a blood-thirsty werewolf and more like a quiet and stealthy hunter.  I think there’s room in the world for both types of Alopex, as each has its visual strengths (I love Santolouco’s “holy shit she’s gonna eat you!” version), but Campbell’s take seems more appropriately “ninja-y”.  Also, I like that IDW’s artists have been consistent in Alopex’s androgynous look, fighting the urge to make her appear excessively feminine (when I said she was “cute” before, I meant that more in a puppy dog sort of way, not a pig-yiffing furry creep-o sort of way).

Lastly, I’m also grateful that Campbell elected to make Alopex’s purple butterfly mask look like fur markings and not that stupid domino mask Eastman designed her with.  With any luck, this interpretation will stick around and other artists will adopt it.

So, did this issue make Alopex more interesting?  Well, yeah, I guess, but only in  a rather negligible increment.  We know her origin and we know her goals and we know ABOUT her, but it feels more like this is a fresh starting point for the character.  It’s up to the writers to make her a character worth caring about now that the basics are out of the way… a year and a half since her introduction.

Grade: C (as in, “Can’t go without complimenting Campbell’s and Nunnelly’s colors, though, especially during the back half of the issue set in Alaska.  Excellent use of predominantly white panels to emphasis the bolder colors”.)