Mid-afternoon of the Living Dead 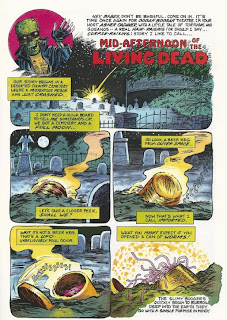 “Mid-afternoon of the Living Dead”

A meteor lands in the Ever-Rest Cemetery, but it’s no ordinary space rock.  The meteorite turns out to be an alien canister containing strange worms.  The night-crawlers work their way into the soil where the coffins reside.  The next morning, a pair of intrepid meteorite hunters trace the trajectory of the meteor to the cemetery.  They get out of their van to hunt for it, but are immediately attacked by flesh-eating zombies who have been resurrected by the worms. 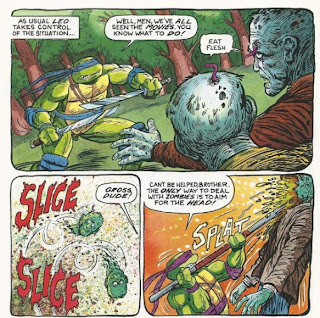 At a nearby lake, the Ninja Turtles are on a fishing vacation.  Sadly, Mikey ate all their bait (mistaking it for anchovies), leaving them in a fix.  Raph sees a local shambling toward them and decides to ask him if he has any bait.  The man turns out to be a zombie, and what’s worse, he’s being accompanied by dozens of other flesh-eaters.  The Turtles whip out their weapons and make quick work of the undead creatures.

*Despite being a Mirage publication, the Turtles are wearing the multi-colored bandanas of their cartoon counterparts.  This was typical in many stories featured throughout Turtle Soup (Vol. 2).

Dave Garcia was another artist who popped up on various TMNT projects in the early ‘90s, was good, and then quietly disappeared from the franchise.  He wore a few hats while working on the series; mostly as an inker on early issues of Archie’s TMNT Adventures, but he tried his hand at penciling a few issues, too.  I thought his style was pretty solid, but he just didn’t get very many opportunities to work on the book, and several of his issues were during the dull cartoon episode-adaptation era.

“Mid-afternoon of the Living Dead” gives Garcia the chance to go a little bonkers, though offered only a scant 5 pages to do so.  He races through the story so quickly there hardly isn’t one at all (alien worms create zombies, TMNT kill zombies, the end).  I can’t really hold it against him, though, because again: 5 pages.

The faux Crypt-Keeper hosting segments with Abner Cadaver were a nice touch, adding a little oomph to what would otherwise be a rather bland short.  A bit of a waste, considering Garcia never did anymore of these “Oogah Boogah Theater” shorts, but it might have been a neat recurring feature had Turtle Soup survived past 4 issues.  I sure would have enjoyed more “Oogah Boogah Theater” segments than “Green-Grey Sponge-Suit Sushi Turtles” segments, that’s for sure.