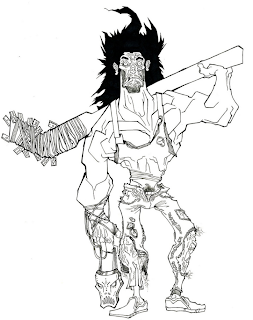 At a pizza parlor in New York, Casey Jones and Raphael sit down for some lunch.  Unbeknownst to them, the waiter taking their order is actually a Foot Soldier robot (cleverly disguised with a fake moustache). 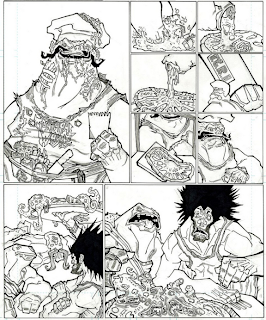 The Foot Soldier delivers the order to the pizzeria's chef... Pizzaface!  Pizzaface prepares the pie in his usual unsanitary fashion, but adds a secret topping: TCRI Mutagen.

The Foot Soldier brings the pizza to Casey and Raph, who are revolted at just a glance.  Finally seeing through the Foot's clever ruse, Casey attacks the Foot Soldier, driving his fist through its robot head.  As Casey goes nuts, Raph taps him on the shoulder and alerts him to a much larger problem.  The pizza has mutated into a gargantuan, grotesque tentacle monster out for blood.

*Wygmans made this comic available to view over at Go Green Machine.org back in 2009.  You can check it out here.

Man, I love this little comic.  It's a brief 3-pager, but Gorman and Wygmans put plenty of energy and personality into every panel.  You wind up spending so much time digesting each page that the comic feels three times its own length.

In case you haven't heard, Pizzaface is one of my all-time favorite characters who has never been utilized in any form of TMNT fiction.  So naturally, I ate this comic up (figuratively speaking; it's hard to maintain an appetite with Pizzaface around).  Gorman's script is pretty much a precise adaptation of Pizzaface's M.O. from the profile on the back of his action figure card; that he travels from pizzeria to pizzeria, poisoning pies in an attempt to ambush the Turtles through their one weakness.  The addition of a Foot Soldier robot disguised with nothing more than a fake moustache, and the scheme working, was a great callback to the absurdity of the Fred Wolf and Playmates TMNT universe.  While the comic is mildly violent and has some decidedly non-kid-friendly trappings, it doesn't for one second take itself too seriously for its own inspiration.

One of the more impressive aspects to this comic is that the entire thing is done in pantomime.  The story is told through the composition and the character expressions, but you never have any trouble picking up on the jokes or the narrative.  I think the best sequence is on page 2, when Pizzaface receives the order and bakes the tainted pie.  Little details make the whole scene, such as Pizzaface's "Municipal Waste" t-shirt or (my hands down favorite panel) the way he smokes three cigarettes at once while he waits for the pizza to finish cooking.  Despite an extremely chaotic art style (that may put off some), the comic reads really intuitively and the layouts flow smoothly.  I think the only panel that felt like a "waste" was the second panel of page 1, focusing on all the weirdos populating the pizzeria (didn't seem to serve much purpose and panel 1 transitions to panel 3 perfectly fine without it).

Anyhow, short and sweet as it may be, this is one of my favorite TMNT fan comics.  If you haven't seen it yet, then check it out.  It's pretty damn cool.