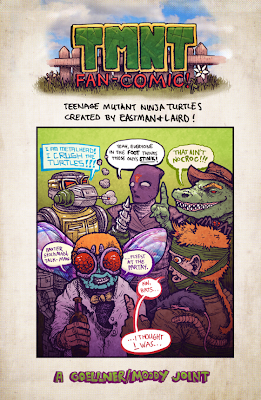 Publication date: July 8, 2013
Story and art by Caleb Goellner and Buster Moody
"TMNT Fan-Comic!"
Summary:
A trio of Purple Dragons are absolutely tickled that they've finally been invited to the annual Foot Clan BBQ.  Only the cream of the criminal crop get invites and the punks figure they're moving up in the world.
Unfortunately, the Teenage Mutant Ninja Turtles and Splinter have chosen to crash the shindig, pummeling the stooges before they can even get their homemade potato salad to the picnic table.  Splinter is especially livid, feeling that the Foot have committed an injustice so great, it requires the Turtles to make an uncharacteristic daytime appearance. 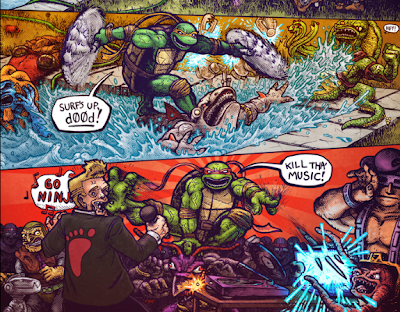 Finally, they confront Chef Shredder and trash his grill.  Why the outrage?  They're incensed that the Shredder would throw a pizza party and not invite them!  Shredder corrects them: This is a barbecue, not a pizza party.  Embarrassed, Splinter and the Turtles slink away as all the villains groan in pain and confusion.

*Buster Moody made this comic viewable over at his blog.  Check it out!  Included are high quality download links, as well.  While you're at it, check out their creator owned comic, Task Force Rad Squad.

There are a lot of great official TMNT comics out there, but I thought I'd extend myself a bit and spotlight some of my favorite fan creations (which are often just as entertaining, if not moreso, than many official publications).  This recent offering from Caleb Goellner and Buster Moody really caught my eye and I think it deserves some attention.

Look, I dig just about every iteration of the Ninja Turtle franchise, but I hold a special place in my heart for the weird micro-continuity of the Playmates action figure line.  That shit was just WEIRD; often too weird for even the Fred Wolf cartoon or Archie TMNT Adventures comic book, as they rarely included the toyline characters.  As an end result, many of the bizarre mutants with elaborate backgrounds (chronicled on the card backs) and even more elaborate designs... never got any fiction.

Well, beyond the stories I made up in my head as I played with my toys.  And really, what could possibly top those?

Goellner and Moody come pretty close, with this fan-comic being a really fun romp through the irreverent insanity of the Playmates toyline.  Just about every villain from the toyline is present at the barbecue (and even a few heroes who probably shouldn't be there, like the Fugitoid) and playing "Where's Waldo" with them is 90% of the fun.  I considered listing them all in the Turtle Tips section, but that'd just be ruining the game for everybody.
Some of the details present on the toy-accurate character designs really ought to be acknowledged, though.  I'm talking about obscure stuff such as Pizzaface's meatball-shaped Siamese twin, which was a part of his toy's prototype but dropped from the release sculpt.  Even Tatsu is there, in what appears to be his Konami video game design (he was a boss in TMNT: The Hyper Stone Heist for the Sega Genesis).

The art is lively and chaotic, but not a mess to read.  And the dialogue is a collection of weirdly strung together quips, catchphrases and non sequiturs which make the juvenile strangeness of the proceedings all the more hilarious.  Shredder seems to be the only character with an ounce of self awareness.

It's only 7 pages (8 if you count the spread as two), but it's a really fun 7 pages.  The quantity of Easter Eggs and sight gags give it a considerable re-read value and I've probably spent more time poring over this fan-made short than I have most full-length comics from official publishers (I don't know why I find the toy-accurate wind-up Mouser smoking a cigarette so funny; I just do).  So give it a look and maybe check out some of Goellner and Moody's other stuff.  You can claim you have better things to do, but you're lying.

(Also, I admit defeat in that I can't identify the two robots in the foreground that Leo beheads.)