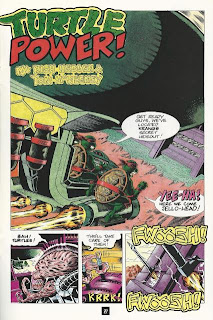 Flying in the Turtle Blimp, the TMNT finally locate Krang’s secret base and prepare to attack.  Spotting them on his security system, Krang fires a harpoon missile which bursts the blimp.  The Turtles crash-land in the moat and then infiltrate the base through a sewage pipe.

Krang, thinking the TMNT are finished, returns to his fiendish experiments.  He feeds tainted dog food to a Scottish terrier, which mutates into a lumbering dog monster.  Krang bellows with joy, believing that he can sell his “retromutagen dog food” on the open market and use it to mutate an army of vicious monsters under his control. 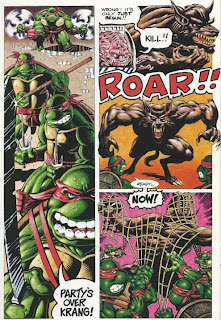 The Turtles finally arrive on the scene and tell Krang the jig is up.  Krang sics the dog-mutant on them, but the TMNT take it down with a net.  They corner Krang, but he ejects from his bubble-walker with a rocket pack and escapes.  Suddenly, a countdown mechanism initiates and the Turtles escape the base just before it self-destructs.  Having foiled Krang’s evil scheme, the Turtles celebrate their victory with a catchphrase or two.

…In the real world, the entire adventure is revealed to have been imagined by a small boy named Bart, playing with his TMNT action figures.  Bart’s mom comes home and finds the living room a mess (the Turtle Blimp toy submerged in the aquarium and their Scottish terrier bound up in a blanket).  Bart’s mom scolds him for playing too messily in the house.

*Fans often identify the dog-mutant as being Rahzar.  However, the monster is never named in the comic and the only similarity it shares with Rahzar is being a canine.  "TMNT II: The Secret of the ooze" (Rahzar's first appearance) was released in March of 1991, only a few months before this issue was published.

*A Roachmill comic (along with a TMNT comic) can be seen on the last page.  Roachmill was a title created by Hedden and McWeeney.

Hedden & McWeeney at perhaps their least offensive, “Turtle Power” is a fun little story with some REALLY lavish coloring by Romano.  In fact, I’d say it’s one of the best-looking stories in Turtle Soup #1, which is a pretty high compliment considering it keeps company with stories by Michael Dooney and Anderson/McCollum.

It’s a bit strange to be seeing all these Fred Wolf and Playmates TMNT-isms in a Mirage publication, but more surprisingly is that they’re implemented without any cheap jabs.  By 1991, the Mirage comics seemed desperate to distance themselves from the popular kids arm of the franchise, often taking potshots at every “Cowabunga” or what have you.  While one might interpret the ending as a subtle way of reminding the audience that the Fred Wolf and Playmates TMNT aren’t the “real” TMNT, I couldn't find any malice in it.  If anything, it was just a refreshing reminder that when kids play with their toys and tell their little stories, they don’t see the same things adults do when they’re watching.

Not a heck of a lot to say about it, other than that Hedden and McWeeney make a few errors (Leo and Don getting mixed up on page 2, Krang referring to regular old mutagen as “retromutagen” when retromutagen is supposed to undo mutations).  Still, the elaborate art and excellent coloring make up for any setbacks and at 6 pages, this kind of story is exactly as long as it needs to be.

Grade: I (as in, “I wonder why they colored the Turtles with red bandanas, though, if this was all a reference to the Fred Wolf/Playmates stuff?  Guess it was another error”.)
Posted by TMNT Entity at 3:15 PM