I've spent most of these Awesome Turtle Picture features looking back at the classics.  It's time to highlight one of my favorite pieces of recent TMNT art.  Ross Campbell's variant cover for TMNT (IDW) #16 featuring Slash: 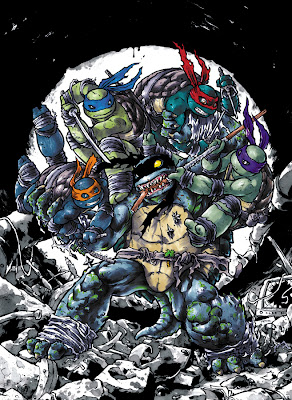 Campbell renders Slash in his more classic design rather than the Tokka-esque appearance Slash sports in the IDW comics.  I've got to say, I like this look quite a bit more (not that I don't dig his Tokka-look, either).

It's a superb composition that fluidly encapsulates all the distinct personalities of each Turtle in a single image.  Mikey is spastically hanging on for dear life, Raph is angrily stabbing away, Don is strategically trying to strike where he thinks Slash might be vulnerable and Leo is calmly and coolly poising for a decisive blow.  The circle of white light in the background frames the characters so they aren't lost in a black mess while also establishing the sewer tunnel setting.  The shuriken sticking out of Slash's body along with all the debris on the ground give the impression that this battle has been going on for a while.  And to top it all off, Slash has his binky.  Aww.

But not Campbell's best piece of work.  That honor goes to his Critters fanart: 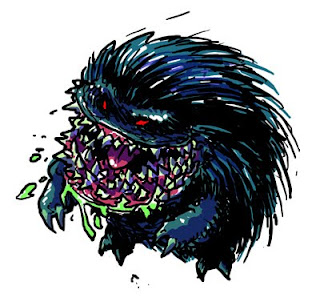 Because holy shit someone actually took the time out of their day to draw Critters fanart I can't believe it.