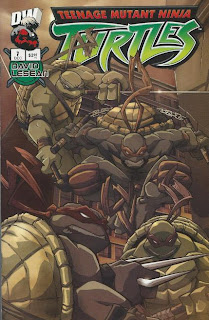 Outside the Second Time Around shop, Dheeraj and Jaya are having a makeout session.  April interrupts them, as it’s time for Dheeraj to get to work.  Inside, Dheeraj brings up the Turtles within earshot of customers and April pulls him aside for a little chat.  She tells him that their existence must remain a secret, and if he respects the Turtles, he’ll keep his mouth shut. 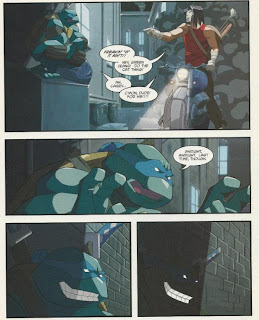 That night, in the alleys, Casey Jones and Leonardo bust up some punks.  Leo asks Casey what he knows about the Thoogs and Casey says that they’re a weird gang of pseudo-cultists, out to resurrect ancient gods.  Casey tells Leo where he can find their hideout (an old theater), then hops on his motorcycle and leaves.  Leo heads to the roof where he’s met by his brothers.  The other Turtles insist on helping him deal with the Thoogs and Leo reluctantly accepts the offer.  Together, all four Turtles pile into the Sewer Sled and head to the theater.

Elsewhere, Dheeraj arrives at his family’s apartment only to be greeted by Mangesh, the leader of the Thoogs.  Mangesh explains that the Thoogs have taken Jaya hostage and if Dheeraj doesn’t join up with them, they’ll kill her.  Dheeraj agrees to join their gang and Mangesh tells him to meet up with the Thoogs at midnight at the old theater. 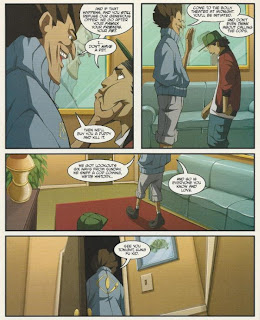 The Turtles arrive at the theater through the rear entrance and spot the Thoogs on stage.  Jaya is tied up and they’re performing a ritual to summon Kali.  Leonardo thinks and realizes that just beating the Thoogs up won’t be enough to stop them from tormenting Dheeraj; they need to scare the punks straight.  Donatello looks around at the leftover theater props and figures he can work something out. 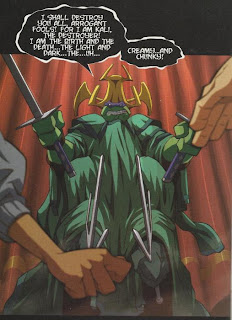 Dheeraj makes it to the theater and attempts to hoist Jaya up to the catwalk by her ropes.  He’s spotted and Mangesh prepares to kill their sacrifice.  Suddenly, a giant robed, four-armed figure wielding swords and sais appears on stage.  Its Leonardo disguised as Kali, of course.  Using the booming audio equipment, Mikey tells the Thoogs that Kali is outraged at their impudence.  He swears to swears to destroy all the Thoogs for bothering him with their foolish ritual.  On cue, Don shuts off the lights and the Turtles beat down all the Thoogs.  Mangesh attempts to flee, but is knocked out by Dheeraj.  “Kali” vanishes and Dheeraj and Jaya leave together.

*This story is continued from TMNT (Dreamwave) #6.  Although it is the last issue, material for the partially completed issues #8-10 were later published as bonus content in the trade paperback collection.

*Contrary to popular belief, the cancellation of Dreamwave’s TMNT comic had NOTHING to do with Dreamwave’s bankruptcy.  Dreamwave closed down in 2005, almost two years after this series was canned.  The Dreamwave TMNT comic was cancelled because it sucked, end of story.

This has to have been the absolute WORST string of TMNT comics I have ever read.  Every issue ranged from bad to terrible, with boring stories, boring characters, incompetent pacing and incompetent art.  There is nothing redeeming about Dreamwave’s Ninja Turtles comic; it’s only saving grace is that you can get each issue for a quarter, I suppose.

This final issue (which wasn’t meant to be the final issue) finishes up Dheeraj’s storyline, as the Turtles find a way to keep the Thoogs off his back.  Hey, remember when the Turtles used to fight bad guys like the Shredder?  Apparently, that stuff is dullsville, man.  Episodic tales where the Turtles teach valuable life lessons to inner city children, THAT’S where it’s at!

Dheeraj is as obnoxiously milquetoast a character as ever.  Needless to say, he hasn’t the charisma to carry a two-issue story arc.  I wonder if David had plans to keep him around as a major supporting character in the series?  I’m grateful the comic didn’t last long enough for me to find out.

Apparently, the next issue would have begun a story arc called “T4: The Turtlenator” which the comic had been advertising for a few months.  The solicit says that Baxter Stockman’s Mouser mainframe would have gained sentience and, angered that the Turtles “killed” her “children”, seek revenge by building a robotic doppelganger called the Turtlenator.  The ads even call out that it’s featuring the enemy from the 2003 Konami TMNT video game, trying to make some sort of tie-in with it.  Wasn’t the evil robot called the Turtlebot in the Konami game?  Whatever, it doesn’t matter.

While the teasers for the Turtles fighting the Turtlenator may have looked promising, let’s not kid ourselves.  The issues would have suffered from all the same scripting and art problems that plagued the entire run of the Dreamwave series.  It may not have been as boring as three straight issues of the Turtles helping kids deal with “real life” problems, but it would have been terrible in its own unique sort of ways, I’m sure.

As for the art in this issue, I’m tired of pointing out all the same fundamental problems.  Instead, I’d just like to mention how hilarious it is that this issue had FOUR colorists and they STILL got bandana colors wrong on a couple pages.  All that and the lettering is screwed up, assigning the wrong dialogue to the wrong Turtle.

Anyway, I’m just glad to have this dark cloud lifted from over my head.  I’ll never have to read these fucking things ever again.