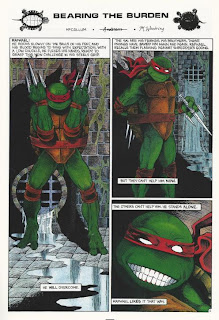 Raphael practices with his sai, willfully embracing the upcoming challenge.  Though many of the Shredder’s goons have fallen before his weapons, they cannot help him in what is to come; he must overcome the challenge alone.  Luckily, that’s just the way Raphael likes it.

Leonardo inspects his swords, pensively awaiting what comes next.  He understands steel and the skill to use it, having bested high-tech aliens with his simple blades.  However, his weapon will be useless in this next encounter and he stoically accepts this reality.

Donatello meditates with his bo staff.  In the past, its range has been like a shield to him, deflecting many attacks… even protecting him from dinosaurs.  However, his staff won’t be able to save him from what’s about to happen.  In fact, no one can save him. 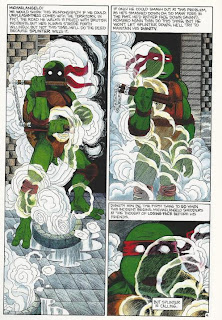 Michelangelo wields his nunchakus, thinking about how his graceful form always ends in brutish results: clobbering his enemies.  He would rather avoid hurting others and shirk the responsibility of being a warrior, but he knows he has no choice.  He must walk into the impending danger willingly and without protection... though he'd much rather fight Savanti Romero again than deal with what lies ahead.

Down in the sewer lair, the Turtles begrudgingly gather in Splinter’s “clinic”, whining that they don’t want to get their shots.  Splinter warns them that shell fungus could prove fatal if they aren’t inoculated.  Filling his syringe, he tells them to “bear the burden” and bend over.

McCollum and Anderson: Two of Mirage’s guest creators who understood the Turtles so well, they provide one of the most introspective character breakdowns in what is essentially a comedy relief short.

The primary theme in most McCollum/Anderson stories is the Turtles and how they relate to both the world of Nature and the world of Man, as they walk the line between the two.  Most of these were pretty dramatic fare, like “Twilight of the Ring”.  So with that in mind, “Bearing the Burden” is a rather effective fake-out, as it opens with some pretty melodramatic prose and ends on a silly gag.

The theme of Man vs. Nature is still in there, as Splinter tells them at the end that if they wish to live like Men, then they must “bear the burden”, but the inclusion is almost satirical.  It reads like McCollum and Anderson poking fun at their own overdone messages and character dissections.

Those aforementioned character dissections that encompass the first 4 pages of this 5-page short are apt and concise, regardless of how the story ends.  They nicely relate how the Turtles feel about their chosen weapon, deftly explaining how their personalities influenced their choice of gear.  It’s surprisingly loaded for just four pages, but not necessarily overwritten, either.  The sequence is really rather impressive and doesn’t feel like it’s reaching too hard to find connections between the Turtles and their tools.

I was especially fond of how they viewed Mikey and his nunchakus.  Mikey is a jokester who likes to show off, but when push comes to shove, he has to mean business.  The ‘chakus, in that regard, are flashy and dynamic to look at… but in the end, you’re just clubbing people over the head with them.  More than that, the text mentions how Mikey would really rather not fight at all, but reluctantly walks the path of a warrior.  Again, they relate this attitude back to the nunchakus, as the whirling and twirling can be enough to intimidate a foe and avoid conflict, but can be deadly if the challenge is pressed.

Again, for what sounds like a throwaway gag comic on the surface, this shit’s pretty deep!

And of course there’s McCollum’s art and Anderson’s inks to tie the whole thing up.  Their art always has an aura of class to it that I find really attractive.  Just look at Mikey’s page, as he stands above the steam grate, posing with his nunchakus.  Great stuff.  Mary Woodring’s colors are a nice fit, too.  I find her coloring efforts here more appropriate than those of Peter Laird (who colored the McCollum/Anderson short “Snapper”), as she forgoes the distracting photoshop effects.  Incidentally, Jim Woodring colored the McCollum/Anderson short “The Ring”.  I’m assuming the two Woodrings were related in some way?  They both handled McCollum/Anderson’s work well, whatever the case.

Grade: A (as in, “Although I wonder where Splinter got those needles?  I mean, he IS in a New York City sewer, after all.  They’re probably rather plentiful, down there…”)
Posted by TMNT Entity at 8:14 PM