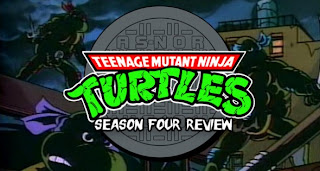 After getting a few requests, I decided to carry on with reviewing the Fred Wolf Teenage Mutant Ninja Turtles cartoon from 1987.  Here, I make my way into the quality-challenged fourth season, which is even more of a slog than season 3.  Luckily, the episodes improve once I get out of the syndicated batch and into the CBS batch... but I ain't there yet.

I know I said I'd start reviewing the 2012 Nickelodeon TMNT cartoon and I wasn't lying.  I'll be doing that one, too!  My Nick TMNT reviews will be published over at Mind of the Geek (while my Fred Wolf TMNT reviews will be at AiPT, as always).  I'll be doing season 1 in batches, but I'll also be keeping up with season 2 as it airs, devoting full reviews to each individual episode.

So by the looks of it, I've got my comic reviews here at TMNT Entity, my Fred Wolf reviews over at Adventures in Poor Taste, my upcoming Nickelodeon reviews over at Mind of the Geek, and my manga translations over at the Optical Internet Translation Gang (and chapter 3 of the TMNT III adaptation is coming soon, I swear!).  Looks like I won't be writing anything but Ninja Turtles stuff for the foreseeable future.  Hey, it's always nice to be wanted!