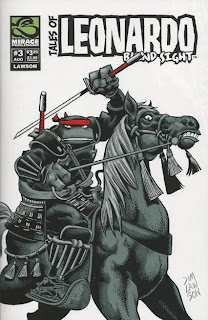 Down in the lair, Splinter invites Leonardo to join him for tea.  Splinter suspects that Leonardo’s blindness is not a physical malady, but something psychological or spiritual.  He asks Leo to drink a special brew of his called “infini-tea” which will help him achieve a higher plane of awareness.  Leo is hesitant to try a “drug”, but sips the beverage anyway. 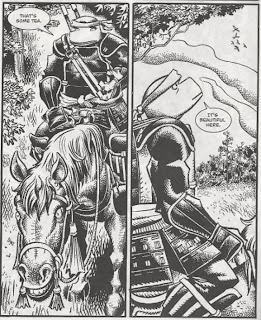 Leo finds himself in the garb of a samurai, sitting upon a horse in the fields of Feudal Japan.  Rather than fight the predicament or question it, Leo instead chooses to relax and roll with things.  He sees a peasant come running through the field being chased by four samurai.  Leo at first wants to stay out of it, until the samurai raise their swords to kill the man.  Leo intervenes and draws his own swords.  Much to his horror, he finds himself brutally slaying the samurai.  He tries to stop himself, but has no control over his own movement and kills all four men.  At Leo’s behest, the peasant flees. 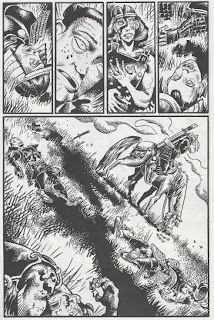 Leo is disturbed by his actions, sheathes his swords and sits ruefully on his horse as it trots away.  Eventually, his horse takes him to a small village.  Leo is surprised to find that the villagers take no notice of his appearance and even offer him bowls of rice.  Leo’s horse then stops at a home, his home, and he’s addressed by his wife and teenage daughter (Yumi).  Leo, still rolling with the vision, plays along.

Entering his home, Leo’s wife asks him to put his swords away, as she doesn’t like them.  Leo abides and stores them in a chest.  He asks his wife if she’s bothered by his appearance and she simply remarks, “You are as you always have been”.  They then eat dinner and go to bed. 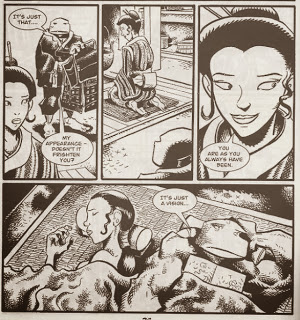 In the morning, Leo’s wife wakes him with terrible news: His swords have been stolen from their chest.  Leo is relieved to see them gone; a statement which shocks his wife and daughter.  Leo tells them not to be upset, as they’re only swords.

Elsewhere, the Daimyo sits upon his throne and he doesn’t look too happy.

Ahh, now we’re at the part of “Blind Sight” I recall losing interest at.

Each installment in “Blind Sight” has served the purpose of teaching Leo a valuable lesson through a different bizarre vision.  The first issue gave us insight into Leo’s ego, showing us the lesson he’s been fooling himself with for years.  The second issue deconstructed that illusion and taught Leo that he cannot be in control of everything all the time.  And this final lesson, which spans two issues instead of one, offers Leo a reason to fight and take back his swords (which he willfully gave up in the first issue).

It’s all a lot of heavy handed metaphor and I was marginally on board with it thus far, but “Blind Sight” is really starting to tread into tedium at this point.  Leo is NOT the most interesting Turtle and stories that try to deconstruct him and offer startling revelations into his inner workings tend to accomplish absolutely zilch.  I don’t want to get too ahead of myself here, as “Blind Sight” isn’t over yet, but we’re really stretching a thin premise out to the breaking point.  The overarching lesson is that Leo needs to be less of a control freak, but gosh how it does go on.

Transplanting Leo into Feudal Japan with his own wife and kid was fairly avant garde, but it feels like so little actually happens in this chapter despite the sudden change in scenery.  The slaughter sequence alone absorbs 5 pages and is then followed by 4 pages of Leo moping around the countryside until he hits the village.  The “samurai family man” stuff is kind of neat.  It gives Leo a taste of what a “normal” life would be like, but by setting it in Feudal Japan it still doesn’t feel quite so “normal” to the reader.  Also, maybe Leo had sex with his hallucination wife?  They’re seen laying naked together on a futon with Leo trying to reassure himself that it’s all just a vision.  This won’t be the last time Leo gets some in the Mirage comic, either.

Anyway, I don’t want to blow my load too early here, as I’d rather save my complete thoughts on “Blind Sight” for the last issue.  I’ll just say that this final vision of Leo’s didn’t need to drag for two issues.