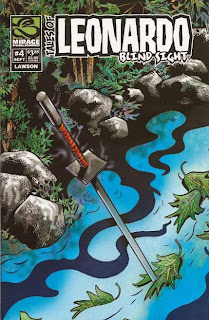 The Daimyo summons Leo to his throne room and admonishes him for losing his swords.  Leo is impertinent, claiming that they’re just swords and don’t really matter.  The Daimyo says that Leo is a swordsman, so what use is he without any swords?  Leo has no answer.  The Daimyo banishes Leo from the village, threatening to kill his wife and daughter if he ever returns. 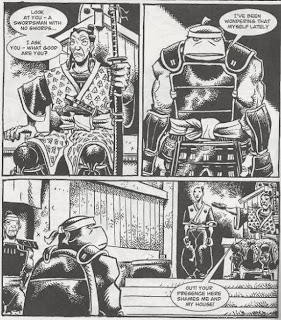 As Leo makes his way through the forest, he tries to remind himself that all this is just a vision.  Leo is frustrated that he still can’t decipher what any of it means.  Suddenly, he sees the peasant he saved the previous day.  The peasant motions for Leo to watch his back and Leo dodges just as a ninja drops down on him.  Leo and the ninja fight and Leo defeats her.  The ninja reveals herself to be Yumi, Leo’s daughter.  She explains that she was ordered by the Daimyo to slay Leo, but planned to kill herself rather than betray her father.  However, she wanted to know what fighting her father was like, even if just for a moment.  Leo tells Yumi to return home and watch over her mother, as he needs to have words with the Daimyo.  Before she leaves, Yumi asks how Leo know she was coming.  Leo says that the peasant warned him, but Yumi claims there was never anybody there.

After dark, Leo approaches the Daimyo in his courtyard.  The Daimyo begins telling Leo the tales he’s heard in the village: That Leo was the son of a kappa and was cast out by his father.  Kubira, rat god of the Zodiac, adopted Leo on the condition that one day Leo would kill his father and take his treasure for Kubira.  And so Kubira trained Leo and gave him a pair of magic swords.  However, when the time came, Leo could not kill his father.  In anger, Kubira banished Leo to Earth where he has lived among Men ever since.

Leo asks if all this was about stealing his swords.  The Daimyo, producing the stolen swords, claims that they were crafted from pure rage and can attract enemies to their blades (hence Leo’s berserker in the field the other day).  He thinks he can be invincible with the swords under his command.  Leo tells the Daimyo that he’s a fool; that he cannot control the swords.  Leo understands that the swords were made for killing and that he feared that’s all he was good for, as well.  However, Leo has realized that the swords are just a part of who he is and only he can control them. 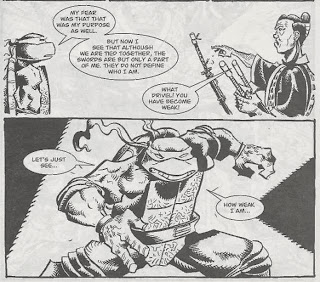 The Daimyo attacks with the swords, but Leo dodges.  The two fight their way into the throne room.  In the chaos, the Daimyo knocks over a statue of Kubira, which in turn knocks over a torch.  The whole room is instantly engulfed in flame and Leo is trapped.  The peasant from earlier appears from the flames and motions for Leo to follow him.  He leads Leo through a hidden passage and the two escape the inferno.

Resting, Leo finally recognizes the peasant.  He is the old bum who the rogue Foot Soldier tricked him into killing.  The bum asks Leo if he’s really sure that he was the one who actually killed him?  The bum tells Leo to recall the moment as vividly as possible.  Leo rewinds back and remembers thrusting his sword between the bum’s ribs and piercing his heart, but what he DOESN’T remember is the sound of the bum breathing.  It finally occurs to Leo that the bum was dead before he stabbed him.  The rogue Foot Soldier killed the bum and substituted his corpse at the last moment, tricking Leo into thinking he was the murderer.  In his grief, Leo subconsciously kept himself from regaining his eyesight even after the poison wore off. 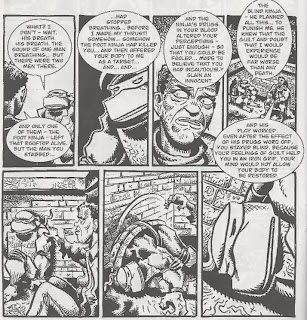 Leo suddenly awakens from his vision in Splinter’s chamber.  He finds that his eyesight has returned.  Leo thanks Splinter and tells him that during his vision he met someone named Kubira, who could be Splinter’s long-lost relative.  Splinter is pleased with the news.  After Leo leaves, Splinter mumbles that Kubira is grateful to Leo for returning his magic swords.

*This story is continued from Tales of Leonardo: Blind Sight #3.

*It is strongly implied by the Daimyo that the "magic swords" he stole from Leonardo were made by Sengo Muramasa.  Muramasa was a famous swordsmith from the Muromachi period who has since fallen into popular legend in Japan, with many believing his blades to have been cursed.  The Daimyo placing the sword in a river and watching the leaves get cut as they drift against the blade's edge is a direct adaptation of a Muramasa legend.  Likewise, Muramasa blades were said to drive their owners to bloodlust and could not be sheathed until they had drawn blood.  Most likely a coincidence, but the Turtles encountered a Muramasa blade in the fourth chapter of the Mutant Turtles Gaiden manga.

Tales of the TMNT (Vol. 2) #5 was a perfect standalone story.  Leo fights a battle and loses.  Badly.  He is soundly humbled and learns a lesson that he cannot always control every outcome and, quite frankly, isn’t as fucking perfect as he thinks he is.

Excellent.  One of the best Leonardo stories ever written.

Tales of Leonardo: Blind Sight is four consecutive issues of driving that damn lesson home; making it as blunt and in-your-face as verbally possible, spelling every metaphor out in big bold letters and holding the reader’s hand every step of the way.  What was a concise, meaningful done-in-one is dragged out and decompressed to the point where every issue I felt like what Lawson was REALLY trying to say was, “Do you get it yet?  Huh?  Huh?  Do you?  Do you?”

Yes, you’re very clever.  Just, please, give US a little credit, too.  We can put this stuff together on our own and draw thematic conclusions without a neon billboard summarizing the morality for us.

The series of vision quests Leo embarks upon each teach him something new about himself.  They start out subtle enough, with the first one illustrating how Leo sees himself.  The second vision pours it on a little thick, with a mystical creature spelling out the dichotomy of Man vs. Nature that Leo represents.  And this third and final vision just beats you over the freakin’ skull with the message about control, complete with Leo orating a deconstructive essay about the themes of “Blind Sight”.  Jeez, writing deconstructive essays about the themes of Ninja Turtles comics is MY job!  It’s no fun when the damn comic does the work FOR me!

To give “Blind Sight” some credit, the vision quests are actually pretty exciting and each is radically different from the others.  I can’t accuse “Blind Sight” of being boring, at any rate.  Painfully obvious in its metaphor, sure, but not boring.

I could forgive all of the above, though.  I really could.  Yeah, it’s very on-the-nose about things, but seeing Leo on an autopsy slab, in a visually exciting silhouette style once again or fighting samurai in Feudal Japan… it’s some pretty cool stuff.

What I CAN’T forgive is that freaking ending that exonerates Leo of all guilt and completely contradicts the damn message Lawson was trying to staple to our foreheads for four issues!  Ffffff!

Okay, so Leo thought he killed the bum.  In his guilt over lacking the control to discern innocent from enemy, he subconsciously refused to allow his eyesight back and gave up.  As is plainly stated in every chapter of “Blind Sight”, the entire lesson Leo goes on these quests to learn is that he cannot control everything.  There are forces beyond him that he has no power over.  All he can do is try his best, accept the consequences of his failures and control what he can.

Fine.  Great lesson.  I can roll with that.

But then the big reveal that Leo is guiltless, that the rogue Foot Soldier killed the bum and framed Leo, just completely annihilates the message.  What we learn is that Leo’s control actually WAS good enough; that he didn’t kill anybody.  Yes, he was tricked into thinking he was the murderer, but after some reflection, he promptly concludes, “NOPE!”

When Leo snaps out of it and wakes up with his eyesight back, it doesn’t feel like he overcame his malady by learning any lessons about control and imperfection.  It feels like he was cured by realizing, “It turns out I was perfect ALL ALONG!  I never needed to learn ANYTHING!”

Leo killing the bum had great resonance.  He made a huge mistake and learned that despite all his training and preaching to his brothers about discipline, even HE screws up from time to time… and not in little ways, either.  If you wanted Leo to be humbled and learn a lesson about being in control, then there it is.  By taking away that mistake which was the catalyst for this entire arc, it completely undoes the whole thing.  Leo went on this quest of self discovery because he made a mistake.  But if you take away that mistake, then it turns out he was okay all along and none of what he learned really applied at all… Because he was always perfect.

“Blind Sight” is a mediocre story arc that ends on such a colossally foolish note that you feel like you’ve completely wasted your time.  Leonardo doesn’t learn a god damn THING.  And neither do YOU.

Grade: F (as in, “For Pete’s sake, this entire miniseries was supposed to deflate Leo’s ego, but all it does is reinforce his superiority complex in the final seconds.  GAHHHH!”)

I don't normally reevaluate a review on a later date, but sometimes I find myself in the shower or laying in bed and suddenly I start thinking about an old story I read and draw a new conclusion.  So here's a second opinion from the same person.

Perhaps the ending was INTENDED to be a reinforcement of Leo's ego.  When all was said and done, the only way for Leo to overcome his malady and restore his sight was for him to create this elaborate fantasy in which he DIDN'T fail.  No amount of vision quests or sermons from Master Splinter were ever going to penetrate his colossal arrogance and the parting lesson we receive in this deconstruction of Leonardo is that he is so full of himself, anything less than pure self-aggrandizing delusion could utterly destroy him.

It is an incredibly bleak outlook on Leonardo, but it DOES bookend the miniseries (the first issue was a look at his ego and so, perhaps, is this final issue).  Maybe that's what Lawson was going for the whole time.  At the end of the day, Leo is just a self-absorbed prick and nothing will ever change that.

I still feel as though I'm manipulating the narrative to come to this conclusion; that I'm really reaching in my interpretation.  But it's the only way to make this ending work.  I suppose it comes down to the individual reader what they take away from the ending, which is a swell exercise if you're in the mood for a vague story that encourages excess hours of reflection and contemplation.

I look at all the F-bombs and concrete conclusions in my initial review and feel that maybe I wasn't looking at the ending of "Blind Sight" correctly.  Or maybe I was and I'm trying too hard to rationalize things now.  Either way, the fact that I felt encouraged to come back and add this second evaluation might actually lend more credit to this issue than I originally gave it.  Whatever the case may be, I can only see two outcomes to this story arc and neither are particularly generous to Leonardo as a character.