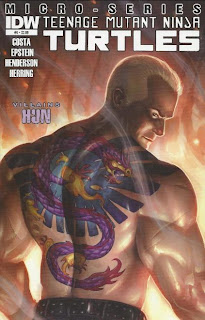 Attending an AA meeting, Arnold Jones lets the group know how far he’s come since he hit rock bottom a month ago.  He decides to tell them the whole story, from beginning to end...

Arnold says that as a youth, he ran with the Purple Dragon gang, where he bleached his hair blonde, got a massive tattoo and was known by the nickname “Atilla the Hun” because of his mountainous size and prodigious strength.  Eventually, though, he met a girl who convinced him to discard the Dragons and go straight.  They got married and had a son named Casey.  However, after his wife died from cancer, Arnold began hitting the bottle and then hitting his son.  Eventually, he laments, that he lost his son altogether and, while his boy was away, he was stabbed and placed in intensive care.

After leaving the hospital in disgrace, Arnold hits the Skara Brae, owned by his friend Brooklyn S. Bridge.  Brooklyn buys him a drink and starts reminiscing about the good ole days, when they ran with the Purple Dragons.  Brooklyn tells Arnold about his daughter, Angel, and how she’s turning the Dragons around into a community watch group.  Not happy with this turn of events, Arnold sets the drink down without embibing it and leaves. 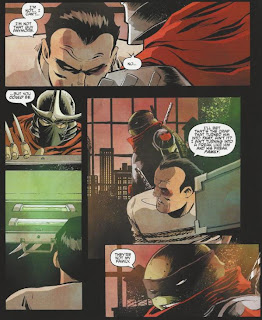 On the way home, he’s pummeled by Dark Leo, who tells him that his master wants a word with him.  Arnold recognizes Leo as one of the freaks his son hangs around with and, without much choice, accompanies Leo to see the Shredder.  Shredder tells Arnold that he knows about his son’s injury.  He asks him how, once his son recovers, will he pay for the extensive hospital bills?  Shredder offers Arnold a chance: Become Hun again, take back control of the Purple Dragons and work for him.  Arnold thinks he’s too old and soft to ever be Hun again, but Shredder shows him some mutagen which he says will return him to the peak of his former physical and mental faculties and then some.  Arnold picks up the vile of mutagen and agrees to Shredder’s offer.

Now a walking mountain of muscle again, and no longer in a state of perpetual inebriation, Arnold dyes is hair blonde, dons a jacket showing off his Dragon colors and takes back his identity as Hun.  He then tracks the Dragons down and confronts them, challenging Angel for leadership.  The Dragons gang up on him, but he beats them down with ease.  He tells Angel that he’ll spare her on the condition that she doesn’t breathe a word of his new “employment” to Casey, Brooklyn or anybody else.  Angel concedes.  The Dragons then swear loyalty to Hun. 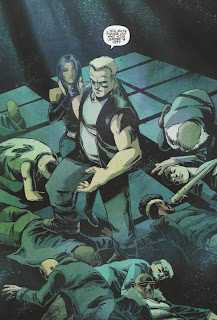 From there, Hun and the Dragons take on the underworld, knocking heads with mobsters and even the Savate, all the while paying a cut to the Foot Clan.  With his “act together”, Hun goes to see Casey in the hospital.  Casey isn’t impressed with his new look (assuming his father has taken to steroids in the absence of alcohol), but Hun promises Casey that things are going to be different.  He wants them to be a family again and expresses his willingness to work long and hard to regain his son’s trust.  Hun then places a gift on Casey’s bed and says that when he’s feeling up to it, he’d like him to join the "family business".  After Hun leaves, Casey opens the gift and finds it’s a new hockey mask. 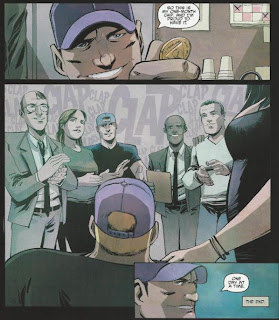 Back at the AA meeting, Hun finishes his story about how he “cleaned up”, “got a new job” and “made amends”.  The rest of the group members give him a standing ovation.

*This issue was originally published with two variant covers: Regular Cover by Tyler Walpole and Cover RI by Henderson.

So Hun is Casey’s dad, hm?  Now there’s a thought…

It was implied in the 4Kids cartoon (and made expressly clear in the Mirage comic version) that Hun was responsible for the death of Casey’s father.  Here, authors Costa and Epstein take the same concept but make it a bit less literal.  Whatever was left of Arnold Jones is essentially killed in this issue, as the Hun persona attains dominance.  Casey’s father was already a withered husk of his former self, but now he’s essentially gone for good.  And Hun’s the guy who “killed” him.

It strikes that great balance of familiar with different that IDW has been doing so well since they started the book.  All the pieces are still there and much of the end result is the same, but the execution is fresh enough to set it apart from past interpretations.

The delivery of the story, too, had a great feel to it.  The AA meeting naturally works with Arnold Jones’s past as an alcoholic, but moreso, it shows how he interprets his return to being Hun as an overall character improvement.  He’s quit drinking, he’s gotten a job, he’s cleaned up his act, he’s working hard to make amends with his son and all in all he’s feeling better, looking better and doing better than he ever did as Arnold Jones the drunk… except, you know.  All that stuff where he kills people and takes their money and delivers it to an international syndicate of assassins.  But again, that’s one of the reasons the AA meeting works so well, because it allows Arnold/Hun to strategically phrase all of his accomplishments as a step in the right direction, much to the approval of his peers.  He really does seem like a better person, even if he’s actually much worse.

But there is a downside to this whole turn of events and it’s that, well… Just where the heck did all this come from, exactly?

There’s a lot of potential in this new plot twist, but it feels like an inspiration that came rather late in the game.  Like one of the folks at IDW woke up in the middle of the night with the epiphany, “Hey, wouldn’t it be neat if…”  And here we are.  It’s a great curveball and, if you’ve managed to avoid spoilers in solicits and previews, it may even have taken you completely by surprise.  But part of the reason it likely took you by surprise is that it doesn’t feel so much like an organic change.

The writers have to jump through some hoops to justify not just transforming Arnold into Hun, but making it seem like he was Hun all along.  Some of it feels mostly natural, like using the mutagen/ooze/whatever to basically return Arnold to the prime of his youth (that’s the stuff that’s kept Shredder and Kitsune alive all these centuries, after all).  Some of it is a bit of a stretch, like how Hun was apparently such a hugely successful gang leader in his old days that even Shredder knows of him and orchestrated Casey’s injury just to get Hun out of retirement and on the payroll.  And some of it is just plain silly, like having to come up with an excuse for Arnold to have black hair and Hun to have blonde hair.

I don’t have backstage passes at IDW, so I can’t say for certain if Arnold Jones was envisioned to be Hun from Day One or not.  But reading this issue, it does feel a bit like there’s some mildly desperate retconning going on to turn one character into another and claim it was always that way.  All things considered, if that was the situation, I’d say the team did it as well as could be done.

Now, on another subject, I do have to wonder what Shredder’s been thinking, lately.  He’s estranged Karai by demoting and demeaning her to the point where she’s begun to resent him and maybe working behind his back.  He’s made an enemy of Alopex, who now secretly plots revenge against him.  He’s made his arch enemy’s son, Leo, his second in command; with Dark Leo’s loyalty depending on how long his brainwashing can hold out.  And now he’s put Hun in charge of running his gang rackets, hoping that maybe Hun won’t find out that he was the one who put his son in the hospital.

Does this seem… kinda… not very smart?  Anybody?  If Karai decides she’s sick of Shredder’s shit, Alopex decides to make her move, Dark Leo’s brainwashing wears off and Hun learns that his boss was the one who stabbed his son… Shredder’s not gonna have many friends left to get his back.

All in all, I liked this issue even if the revelation didn’t feel entirely natural.  The framing device was nicely tailored to the character and it finally feels like payoff in regards to the narrative of Casey’s dad; I was wondering just where they were going to take him, if anyplace.  And with Hun now rising as a big player, it also means that Casey can finally get off the sidelines and maybe taking a proactive, starring role in some future stories.  That’s something to look forward to, for sure.

Grade: B (as in, "But please indulge me as I paraphrase The Simpsons...")

“Hello, my name is Arnold Jones and I’m an alcoholic.”

“Mr. Jones, this is a Girl Scouts meeting.”

“Is it?  Or is it that you girls can’t admit that you have a problem?”