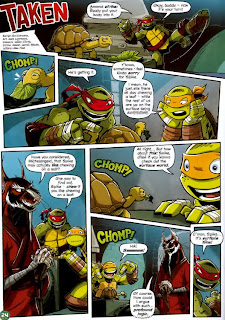 In the lair, the Turtles are pondering Spike and whether he’s happy with his life: sitting and chewing on a leaf all day.  Raphael decides to see what sort of lifestyle Spike would TRULY prefer and (after putting a tiny red bandana on the guy) takes him to the surface for some adventure. 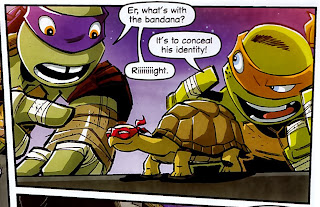 Showing off for Spike, Mikey tries to recreate his Kick of the Pelican attack and fails.  In the distraction, Spike vanishes.  Leo points to a pair of Kraangdroids carrying something small in their arms.  Raph assumes the Kraang have kidnapped Spike for some nefarious purpose and gives chase.

The Kraangdroids board a helicopter and the Turtles manage to grab onto the landing gear just in time.  They climb inside and begin pummeling the two Kraangdroids.  Raph recovers a lockbox they were carrying while Mikey accidentally kicks the pilot from the chopper.  The Turtles bail just as the chopper crashes and explodes. 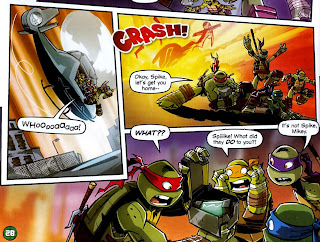 Raph opens the lockbox expecting to find Spike, but instead finds a vile of ooze.  Spike is nowhere to be found and Raph comes to the conclusion that he really WAS unsatisfied with his life amongst the TMNT and chose to leave forever.

Returning to the lair, Splinter informs them that Spike came home on his own accord, preferring to just chew on his leaf all day.  Raph is thrilled to have Spike back and gives him a hug.  As soon as his brothers begin to chide him for being a softy, Raph kicks them all in the face.

*This story is continued from “Daydream”.  The story continues in TMNT Magazine (Panini) #5.

*The “Spike, chew your leaf…” gag was taken from the episode “Turtle Temper”.

*Mikey’s Kick of the Pelican occurred in the other story published alongside this one in TMNT Magazine (Panini) #4, “Daydream”.

Definitely the better of the two short strips published in Nickelodeon TMNT #4, at least when it comes to the script.  Caruana’s pretty darn good at this and usually the best stories are the ones written exclusively by him without assistance.

Good ole Spike.  Always there.  Always chewing.  He’s another one of those little touches from the Nick cartoon that I really liked, right up there with Leo and his whole “Space Heroes” thing.  It adds a bit to Raph, giving him a pet/buddy that he can confide in or show off his softer side to.  Rather than take away from Raph’s “lone wolf badass” gimmick, it instead offers him a little more depth so he can be more than just the one-note trope.

Or maybe Spike’s just a turtle that sits around chewing leaves all day.  I dunno.

Knowing the spoilers about season 2 of Nick’s TMNT cartoon, I find this Spike story is extra interesting.  He was never the focus of any plots in the first season of the cartoon, being more or less a prop, so this little short tale about him kind of adds to what will become of his “character” in season 2.  I’m sure we all know it; press releases spoiled it months ago.  But just in case you’ve been living under a rock, I won’t bring it up.

Anyhow, fun little tale with the tight writing from Caruana I’ve really come to dig (even Raph showing Spike how to do a kick in the first panel of the story ties back into the concluding gag).