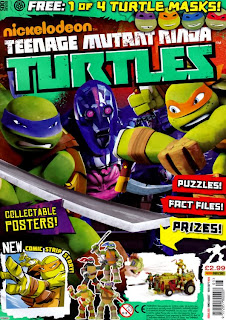 Outside a building, a thug with a massive sledgehammer reviews his map, decides he’s arrived at the bank and prepares to make his big entrance.  Smashing through the wall with his hammer, the thug demands the cashiers hand over all their money.  Unfortunately, he’s not at the bank; he’s at the 24/7 noodle shop.  Undeterred, the thug orders Mr. Murakami to hand over all his noodles.  Leaving with the ill-gotten pasta, he tosses behind his calling card: a slug (because his name is Slug). 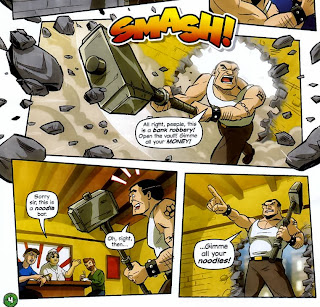 Elsewhere, the Turtles and the Kraang are fighting it out in a warehouse.  Turns out the warehouse is where the Kraang store a good portion of their mutagen, which also means there are a LOT of Kraangdroids guarding the facility.

Slug, meanwhile, figures he’s finally found the bank and tears through the wall with his hammer.  He’s actually at a Laundromat.  Still undeterred, he demands the patrons surrender their laundry.

Back at the warehouse, the Turtles are nearly overwhelmed by the number of Kraangdroids laying siege to them.  Suddenly, the wall comes down and Slug (carrying a sack of noodles and a sack of laundry) comes charging in.  This time he’s finally lost his cool about missing the bank AGAIN and demands satisfaction.  Seeing the Turtles, he figures he’ll take his frustrations out on them and begins swinging his sledgehammer wildly in their direction. 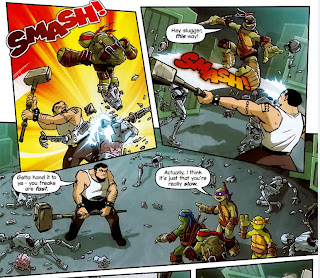 Leo realizes they can use Slug’s destructive rage to their advantage.  The Turtles each egg him on, drawing his swinging their way.  In no time flat, Slug inadvertently wipes out all the Kraangdroids.  He finally turns his anger directly to the Turtles, who don’t see him as much of a threat.  Slug then hurls his sledgehammer at them.  They dodge, but the hammer knocks a crate down on top of them.  The crate shatters and several canisters of mutagen come tumbling out.  Slug collects his booty and bids the Turtles farewell, pegging them each in the face with one of his slugs.

Unfortunately for Slug, he fails to see the sack of laundry he left on the floor and trips over it.  He covers himself in ooze and mutates into a giant slug-man.  Swearing vengeance against the Turtles for turning him into a freak, he charges. 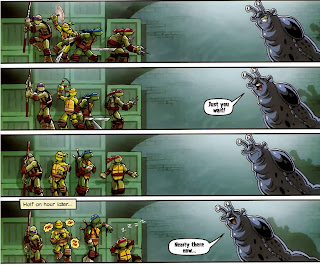 Half an hour later, he’s no closer to reaching them, so the Turtles decide to just call it a night and go home.  On the way out, Mikey begins workshopping monster names for the new mutant.  Donatello suggests that since his name was “Slug” and he was mutated into a slug, then perhaps they should just call him “Slug”.  Mikey tells Don he just doesn’t understand science.

*Mr. Murakami and his noodle shop 24/7 first appeared in the episode “Never Say Xever”.
*This story will be reprinted in TMNT Magazine (Panini) #60.

This was a pretty funny strip featuring a good twist at the end.  Usually as these things go (in the cartoon anyway), the villain inadvertently comes into contact with mutagen, turns into a monster in the final minutes and there’s a big battle.  This story does all the setup, but skips the whole final battle thing.  Because a slug mutant is pretty useless, all things considered.

The flippancy with which people are turned into action figure-friendly mutants is probably my only substantial complaint about the Nick TMNT cartoon (and it only looks like it’s going to get worse with season 2).  So a comic that pokes fun at the formula is a welcomed smidgen of levity.  And since the Panini comics can’t resolve any storylines on their own, as they don’t want to contradict the cartoon, it might be a good idea to start introducing original villains and characters.  Sort of like ongoing “side stories” to the cartoon’s main narrative.  Hey, it would beat the Turtles fighting the Kraang for random junk like they’ve done I think 3 times so far in this series.

Anyhow, one of the better issues from Panini, so far.  The Panini comic is mostly preoccupied with humor and gag strips, and I do wonder how long that approach can go on before it becomes tiresome.  That being said, they’ve been doing a good job of it so far.