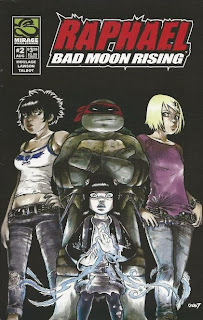 Before the Opticarn can suck out Raph’s soul, Shadow swoops in on her bat-steed and chops off its head (eyeball).  The souls it had previously eaten all flee from the neck stump, distracting the other Opticarns and allowing Raph, Shadow, Sloane and Lulu to escape. 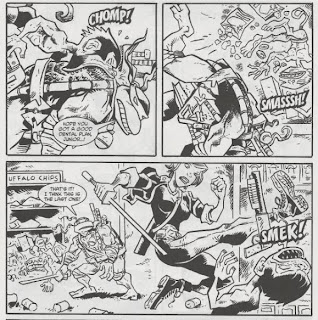 Reaching the metropolis of Nocturna, they stop by an All Night Mart so Sloane can pick up some cigarettes.  While she’s lingering outside, she makes a private phone call.  Back in the minimart, several hooded figures remove their disguises, revealing themselves to be shotgun-toting monkeys.  They attempt to hold up the cashier and take a family of whatevers hostage, but Lulu uses her magic to stop their bullets in midair while Raph and Shadow knock them all out.  The trio leave with their complimentary groceries from the grateful cashier and meet back up with Sloane.

Sloane leads them into the sewers where she says the entrance to the Den is.  Lulu opens a magic elevator which takes them to the penthouse of a skyscraper.  While Sloane fixes Lulu a snack, Raph and Shadow investigate the posh digs.  Finding no clues or any sign of struggle whatsoever, Raph accuses Sloane of having some sort of ulterior motive.  Sloane resents the accusation, as she really doesn’t know where Lilith or the pack disappeared to, as the Den is never left unguarded.  Raph asks Lulu about her parents and she explains that her father is Gnostros, the King of the Elves.  Her parents never married but have joint custody of her. 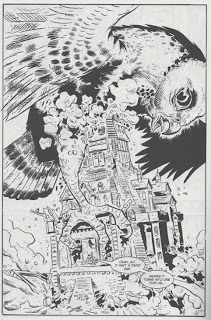 Investigating the roof, Raph finally finds a clue: the severed head of the pack’s pet wolf Clea impaled on a spike.  Raph also finds a gigantic barn owl feather.  Going back inside, Raph hypothesizes that whoever made off with Lilith and the pack, rode in on a giant barn owl and carried them off.  Sloane is incredulous to the idea, at least until a giant barn owl lands on the top of the skyscraper.  With its talons, it rips off the penthouse and flies away with it, leaving Raph, Shadow and the others no choice but to go for a ride.

I’d say “the plot thickens”, but that sure as heck isn’t true.  If anything, what’s passing for a “plot” in this book is being watered down to the point of total transparency.  You can tell that “Bad Moon Rising” isn’t exactly brimming over with story and despite a 30-page length, this issue is desperate for content.

Moulage is trying his best to sell the wonder and bizarre wackiness of Nocturna, but he does so through a series of gimmicky and clichéd gags.  You know, “they have supermarkets… but they sell WEIRD FOOD, NOT NORMAL FOOD!”  Totally original stuff like that.  I mean, Raph opens a bottle labeled “spirits” and a bunch of ghosts pop out!  Haha!  He didn't want ghosts, he wanted liquor!  But the bottle said "spirits"!  It's a pun!  Get it?

All these corny Nocturna gags feel like they’d embarrass Beetlejuice.

And I wouldn’t have cared about the detour to the All Night Mart so much, as they needed to do something to establish how Nocturna is just like New York except full of spooky puns, it’s just that Lawson draaawwws iiiiiit oooooouuuuut.  10 pages, a third of this comic, is spent on the characters wasting time at a convenience store.  You know that bit I was just telling you about?  Raph drinking the bottle of spirits?  That’s 2 pages.  TWO PAGES of Raph drinking a beverage. 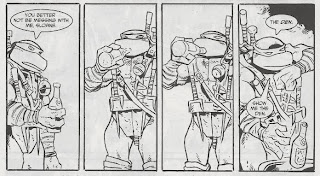 The issue‘s worst offense is that it’s just so BORING.  You’d think Raph flying on a giant bat and fighting eyeball-dactyls would be exciting, but there’s no energy or charm to any of it.  And Raph’s characterization in this story seems to be the repository for all the insipid “Nocturna is spooky and crazy!” gags.  He’s the one who gets surprised and confused by every weird and goofy thing and is always complaining or being the butt of lame jokes.  It makes you wonder why it’s just HIM, though?  Why isn’t Shadow just as weirded out by all this supernatural craziness?  There really isn’t any good reason for her to take to Nocturna so naturally and matter-of-factly (especially considering Raph’s lifetime of experience with supernatural critters).

It’s just a whole lot of cheap writing.  TMNT has produced some bad comics in the past, but this is beneath even those.

Grade: F (as in, “Full moons turn lycanthropes into werewolves.  In the real world, they transform bad writers into god awful writers”.)
Posted by TMNT Entity at 8:54 PM