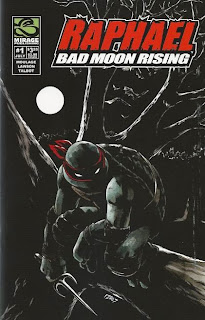 At the farmhouse in Northampton, Raph and Shadow are watching “The Exorcist” and getting freaked.  The doorbell rings and they’re greeted by a pointy-eared little girl named Lucrezia (“Lulu” for short).  Lulu asks if they can help her find her mommy and Shadow immediately invites her in.  Lulu asks if her dog can come, too, and said “dog” turns out to be a lumbering werewolf.  Raph is about to attack the lycanthrope when it transforms back into a human: Sloane. 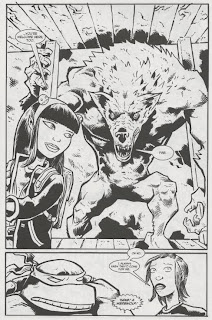 It’s been almost a year since Shadow accidentally killed Sloane, inciting Lilith, the leader of the werewolf pack, to swear vengeance.  Sloane says that Lilith was able to save her soul, though her body is now undead, and that she knows Shadow stabbed her on accident.  The two friends make up and Sloane gets dressed.  Raph asks what’s going on and Sloane explains that Lulu is Lilith’s daughter.  She was babysitting Lulu, but when she returned to the “den”, the entire place was trashed and the whole pack was missing (Lilith included).  Raph reluctantly agrees to help, but only because Sloane is Shadow’s friend, and gears up with a golf bag full of Casey’s blunt instruments and various holy daggers and the like. 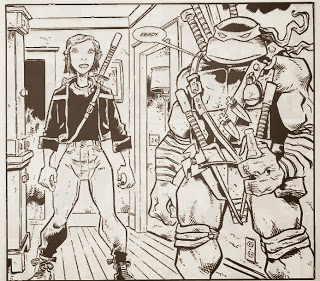 Lulu casts a spell and when they open the front door, they find themselves not in Northampton, but Nocturna: a world that exists in the shadows of Earth.  Lulu blows a whistle and calls down some giant bats with saddles.  They each take a bat to the sky, though the girls all have a good laugh at Raph’s poor riding skills.  These antics go on for 6 pages. 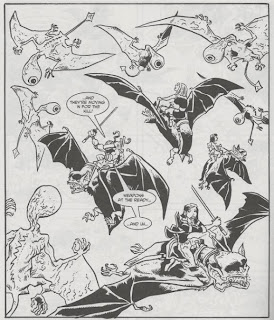 Eventually, they’re attacked by a swarm of Opticarns: pterodactyls with giant eyeball heads that can suck your soul out of your body if you look at them long enough.  Raph tells Shadow to draw her katana and gets ready to fight when suddenly he finds himself staring into an Opticarn’s eye, mesmerized…

*This story is continued from Tales of the TMNT (Vol. 2) #7.  The story continues in Raphael: Bad Moon Rising #2.

*When Raph says his brothers aren’t around, an editor’s note indicates they’re caught up in “a tale as-yet untold”.  Exactly what tale this was, I don’t think we ever found out.

We’re thrust into this adventure of dark fantasy and sword & sorcery out of the blue and it feels less like a Teenage Mutant Ninja Turtles story and more like a bad piece of “Twilight” fanfiction.  Or “Underworld”.  Or any one of those trendy “vampires vs. werewolves” things that are so popular for some reason.  Writer Bill Moulage doesn’t seem to have done much work beyond a scant handful of TMNT-related comics in the mid 2000s.  In fact, the only other credit I can find for him is for an issue of The Puma Blues, an environmental awareness comic Steve Murphy wrote back in the ‘80s.  That leaves me with the impression Moulage got this gig through connections, not so much the quality of his pitch, because none of this is very good.

I guess a big problem is also the decompression.  Its 28-pages, but you wouldn’t know it by reading it.  Lawson endeavors to create a moody atmosphere through pages and pages of build-up at the start, but 6 pages of Raph and Shadow watching “The Exorcist” is really overdoing it (that’s more than 1/5 of the whole issue, right there).  I mean, I understand what he was going for and building atmosphere in a tangentially horror-themed comic is fine… but there are limits.  And it doesn’t help that Talbot screwed up some of the lettering for “The Exorcist” dialogue, giving the wrong lines to the wrong characters.

Likewise, Raph bumbling around on the bat-steed drags for 6 pages.  Yes, 6 straight pages of tiresome comic relief and it’s all the same joke over and over again (“Ha Ha Ha.  Raph just threw up.  Ha Ha Ha.  Raph is hanging upside down.  Ha Ha Ha.  Raph can’t control his bat”).  Comic relief that uninspired really, REALLY shouldn’t go on that long.  So yeah, this was a 28 page comic… with 6 pages of characters watching TV and 6 pages of Raph acting like a doofus to elicit a cheap laugh.

But hey, we’re just getting started.

Grade: F (as in, “For Heaven’s sake, how much dialogue from a movie can you copy before it crosses the line from ‘sampling’ and becomes ‘theft’?”)
Posted by TMNT Entity at 10:35 AM