Tales of Alternate Turtles on the Moon! 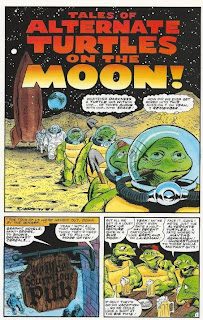 “Tales of Alternate Turtles on the Moon!”

Down at Ye Olde Scurrilous Pub on the wharf, the Alternate Turtles are groaning about their fate.  They were employed as understudies of the Ninja Turtles, but hardly ever get any work because the TMNT keep hogging the spotlight.  Suddenly, Captain Scaley-Beard of the Jolly Deathtrap approaches them with a job offer.  He says he bought a treasure map off a local drunk and needs a crew to go retrieve the booty.

The Alternate Turtles are incredulous, so Scaley-Beard explains.  Apparently, the drunk was once a pirate who helped steal some Martian treasure and buried it on the moon.  Except after it was buried, all the pirates double-crossed each other and there was a slaughter.  The drunk managed to escape with his life, the only survivor, but was too injured to ever go back.  The Alternate Turtles glimpse a knife planted in the drunk’s back and politely decline Scaley-Beard’s offer.  They’re subsequently bashed over the heads and shanghaied. 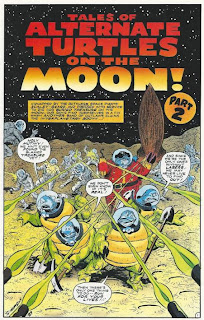 With no weapons to defend themselves, the Alternate Turtles hightail it to a nearby crate and hide.  In the crater, they find the skeletons of several dead pirates and a big ole X.  Digging up the X, they find the lost treasure and figure they’ll just take it for themselves.

Inside the Jolly Deathtrap, the Alternate Turtles and the bridge crew (nothing but babes in bikinis) break open the treasure chest to find it filled with potato chips.  Scaley-Beard hails the ship and says that chips are the greatest treasure in the galaxy.  The pirate opens fire and the Alternate Turtles think fast.  They launch all the chips at Scaley-Beard’s ship, clogging his warp drive intakes and blowing the villain to smithereens.  Unfortunately, the Alternate Turtles don’t know how to land a spaceship and brace for impact as they reenter Earth’s atmosphere.

*Don Simpson previously wrote an adventure starring his version of the TMNT in Shell Shock, “Teen Techno Turtle Trio Plus One!”

*The index mistakenly lists this story’s title as “Alternate Turtles on the Moon!”, missing the “Tales of”.

*Having been broken up into two parts, this story may have originally been planned to run in two separate issues.  For whatever reason, both parts were run back-to-back in the same issue.

*Simpson has made this story, along with annotations, available for viewing on his site.

Don Simpson’s follow-up to his first TMNT parody comic, “Teen Techno Turtle Trio Plus One!” just doesn’t quite hit the same mark, at least not for me.  It has the same sort of irreverent humor, poking fun at the out-of-control franchising that ran wild during Turtlemania, but the jokes just aren’t as snappy.

Instead, “Tales of Alternate Turtles on the Moon!” drapes itself in lunacy and random weirdness which, coming after the “Guest Era” of TMNT Volume 1, just wasn’t so unique anymore.  Wooden rocket ships and potato chip treasure… It reads more like a game of Mad Libs than a terribly clever story.

Simpson’s cartooning is still highly enjoyable and Lavigne’s coloring goes well with it.  Simpson renders the absurd visuals really well; my favorite sight gag being the skeletons of old timey pirates wearing space suits.  You know, like if Walt Disney World decided to combine Pirates of the Caribbean and Space Mountain into one ride.

Overall, this one just didn’t strike my funny bone as much as Simpson’s first go with the Alternate Turtles.  Not the worst so far as goofy, surreal TMNT parody comics go, but it doesn’t stand out by any great measure, either.