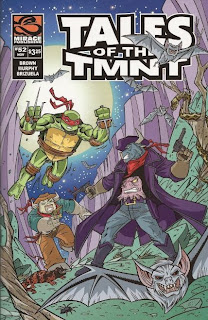 “The Crystal at the Heart of the World”

Frontispiece: Dressed as a sheriff and hanging out at a ranch, Mikey mentions how most badmen quiet down once the law shows up.  Most, but not all… 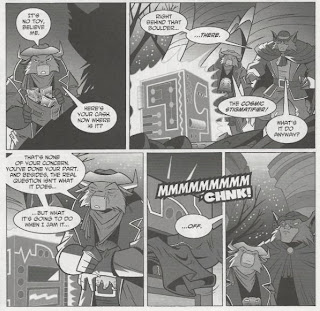 On the plains of Moo Mesa, a rider races to a meeting place in a narrow canyon.  The rider is Bixolio, an Utrom.  He meets with the thief Bat Blastagun who has fulfilled his end of their transaction: stealing a device called a Cosmic Stigmatifier.  Bixolio jams a glove in the strange device, shutting it down.

At Utrom HQ on Earth, Donatello and Glurin are working on some experiments when Glurin’s Cosmic Stigmatifier Monitor starts going off.  Apparently, Cosmic Stigmatifiers are like perpetual motion machines and are supposed to be incapable of being shut down.  Raph and Casey show up with some burgers and Glurin suggests the four of them use his Dimensional Gridshift Unit (or “Gridshifter”) to travel across time and space and check in on the faulty Stigmatifier.

Back in Moo Mesa, the C.O.W.-Boys (Marshal Moo Montana, the Dakota Dude, the Cowlorado Kid) are in a shootout with Blastagun and Bixolio.  Bixolio flees, leaving Blastagun behind to be captured.  Suddenly, Glurin, Don, Raph and Casey appear in a bright flash of light.  After a brief introduction, Glurin repairs the Stigmatifier by removing the jammed glove and wonders what the point of vandalizing it was. 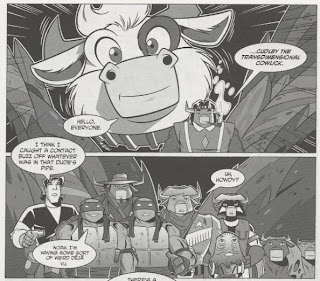 They’re startled by several ordinary cows draped in tattered clothing that come stampeding through the canyon.  They’re followed by mystic Jose Rey, who explains that these cows were once citizens of Moo Mesa, but some insidious force de-evolved them.  Jose Rey says he’s spent some time communing with the spirits on this predicament and came into contact with a powerful transdimensional creature: Cudley the Cowlick.  Raph and Don feel a strange sense of déjà vu upon seeing him, but Cudley says there isn’t any time to discuss it.  Jose then uses his mystical third eye to track where the strange energies are coming from.

The trail leads them to the Sacred Cave, where they find Bixolio and several members of the Utromi Preservi cutting shards off the Sacred Crystal and experimenting with its energies on the helpless citizens of Moo Mesa.  The good guys charge and a firefight breaks out.  In the chaos, Blastagun sees his chance to escape and breaks his bonds.  He then summons all the bats in the cave to cover his escape as he flies away.  The sonar from the bats shorts out the hovercrafts of the Utromi Preservi and they all plummet to the ground.  The C.O.W.-Boys round up the Preservi, though Bixolio has escaped. 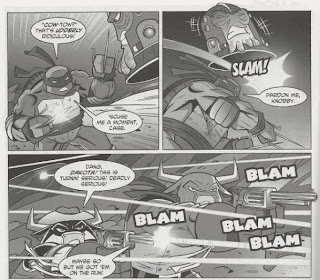 A hooded stranger then interrupts them, saying she can explain everything.  She’s a strange alien named Ola of the Una.  The Una are the oldest surviving race of the multiverse and long ago took it upon themselves to watch over all other sentient races.  The Una planted Muta-Crystals within numerous worlds, including below Moo Mesa (the Sacred Crystal being a fragment of the Muta-Crystal).  The Muta-Crystals create Lightports, which are like wormholes allowing transportation from one world to another.  The Utromi Preservi ambushed her as she was travelling through the Lightport, mortally wounding her, then began searing off shards of the Muta-Crystal in Moo Mesa for their own ends.

Una asks Cudley to take her back to her homeworld where she can die in peace and Cudley abides.  Moo Montana then gives custody of the prisoners over to Glurin so he can take them back to Utrom HQ on Earth for punishment.  With that over with, the Turtles and Casey bid farewell and Glurin activates the Gridshifter to send them home.  While between dimensions, however, Bixolio surprises them from the other direction.  He frees the Preservi prisoners and disappears with them.

Upon arriving back at the lab, Glurin is horrified to find that his Cosmic Stigmatifier Monitor has been stolen.  Raphael then surmises that Bixolio’s entire “scheme” to clog one Stigmatifier was a ruse to get Glurin away from the Monitor.  Donatello asks what’s so valuable about the Monitor.  Glurin explains that it does more than just keep track of all the Cosmic Stigmatifiers, but that it can be used to locate every Muta-Cyrstal in the multiverse.

*The Utromi Preservi last appeared in the story “The Risen”.

*Raph and Donatello are astonished to find evil Utroms exist, but they previously fought a different splinter faction of nefarious Utroms, the Illuminated Utrom Alliance, in Tales of the TMNT (Vol. 2) #23.

*As a matter of fact, the evil Utroms being identified as the Utromi Preservi may be a mistake.  The Utromi Preservi were revealed to be a rogue faction of Utroms dedicated to preserving the legacy of their people by extracting the memories of the dead.  The Illuminated Utrom Alliance, on the other hand, were a nihilistic sect of terrorists who believed that the only way to bring peace to the universe was to destroy all intelligent life in it.  The goal of this issue's evil Utroms, revealed in the next chapter, aligns closer to the motives of the Illuminated Utrom Alliance rather than the Utromi Preservi, indicating author Steve Murphy may have gotten the two factions confused.

*This issue also included a back-up story, “The Mission” by Dan Berger, and a bonus pin-up, “A Cowboy, a Cowlick and a Cowabunga!” by Adam Riches.

If the past chapters in the Moo Mesa arc had too little story, this installment suffers from having way too much.  An excess of characters are thrown at us in rapid succession and not all of them contribute anything particularly meaningful.

Cudley the Cowlick from Archie’s TMNT Adventures making an appearance was a big deal, but it boils down to nothing more than a gratuitous, nostalgia-fueled cameo.  He does absolutely nothing.  Jose Rey pops up and says, “By the way, have you met my pal Cudley the Cowlick?”  Cudley then proceeds to hang out in the background until he’s needed to taxi Ola away at the very end.  He’ll do a little more in the concluding chapter, but still nothing meaningful enough to warrant his inclusion.  I guess the temptation to include Cudley the Cowlick in a story featuring the Wild West C.O.W.-Boys of Moo Mesa was too powerful to deny, but it’s still a pointless bit of fan pandering.

Then there’s Ola, who exists to do nothing other than deliver a boatload of exposition right before the issue wraps up.  There’s no foreshadowing to her existence; she doesn’t make any veiled appearances at the start of the issue or anything like that.  No narrative buildup whatsoever.  She’s just a weird alien who shows up at the very last possible minute to explain the plot to everyone because none of it made any sense.

Even the C.O.W.-Boys barely play a role in what’s supposed to be a crossover with them.  They just sort of mope around at the edge of the group, spouting generic dialogue and joining in the big fight; again, not really contributing much to the runaway story.

Murphy does, at least, try to tie a number of other concepts from earlier stories together into this one issue.  The Sacred Crystal Shard was the deus ex machina of the previous Moo Mesa chapters and the alien origin provided here nicely compliments the “folk tale” origin Jose Rey gave for it back in Tales of the TMNT (Vol. 2) #21.  The Utromi Preservi from the Professor Obligado back-up strips get a meatier role as villains in this story and we’ll see some more characters from those strips in the last chapter of the arc, so I guess those Obligado strips were good for something.  The mention of the Gridshifter also pigeonholes this story into a specific point during Volume 4.  Kind of weird when you look at this Moo Mesa arc as a whole and realize how each encounter was separated by quite a few years (in the first one, Splinter was still in “daddy” mode, grounding the Turtles).

Talbot seemed to have lettered this thing in a hurry, though.  Raph gets Don’s lines and Don gets Raph’s lines on more than one occasion and there are some spelling and grammatical errors in the dialogue (“What do can you tell us about these poor citizens?”).  These errors aren’t normally a big deal, but they don’t do much to take the edge off the rushed, overstuffed plot and all the thin characterization.

As you can see, I haven’t been a big supporter of these Moo Mesa crossovers.  They’re just not well-plotted or well-scripted and this two-part finale is a hell of a mess.  Dario Brizuela’s art is quite honestly the only thing worthwhile about this whole fiasco.

Grade: D (as in, “Did Casey really just make a ‘Cow Pattie’ joke?  Ugh, I thought this thing couldn’t get any worse…”)