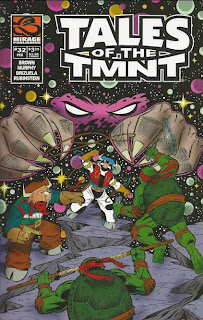 Frontispiece: Drawing his katana, Leonardo prepares to defend Klunk from a mysterious foe.  Leo says that he’s willing to take on any challenger and rarely minds a good fight, but when the same bad guy keeps coming back over and over and over again, he starts to get annoyed…

Somewhere in Moo Mesa, the mystic turtle Tsou-T’an-Jin meditates, hoping to glimpse the Eye of Aga-Moo-Tou and perceive even a fraction of its omniscient wisdom.  He astral projects to the ethereal dimension Bov-Gamesh and makes his way toward the Eye.  However, he’s cut off by none other than Savanti Romero.  Romero blasts Tsou and forces his spirit back into his body.  Sensing great danger, Tsou realizes he must call for help. 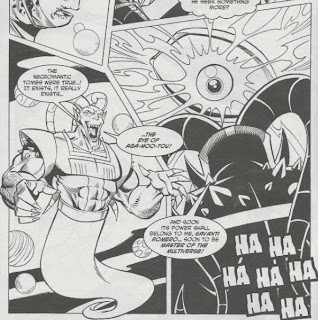 Elsewhere in Moo Mesa, at the Tumbleweed Saloon, the C.O.W.-Boys (Marshal Moo Montana, the Dakota Dude and the Cowlorado Kid) are enjoying some drinks when everyone is startled by a strange light in the distance.  The eerie glow is coming from the Sacred Cave, so the C.O.W.-Boys decide to investigate.

Inside the cave, the glow is coming from a weird door made of light.  The C.O.W.-Boys step through the door and find themselves in Bov-Gamesh.  They ascend a staircase floating in space and eventually spot Savanti Romero, chanting spells at the Eye.  Romero doesn’t want to be disturbed and transforms their guns into snakes.  The snakes quickly coil around and subdue the C.O.W.-Boys.

In Manhattan, the Turtles are on a rooftop battling a strange bunch of ninja they’ve never seen before.  They each strike a ninja, but their foes vanish into thin air.  The Turtles are then approached by the astral form of Tsou, who says he had nothing to do with the weird ninja and asks for their help.  The Turtles aren’t in a hurry to assist the stranger until he mentions that their old friends, the C.O.W.-Boys, are in trouble.  The Turtles rise to the occasion and enter through a doorway made of light, conjured up by Tsou.

The Turtles wind up in Bov-Gamesh and make their way up the staircase.  They’re stopped partway by the C.O.W.-Boys, who are now under the control of Savanti Romero.  Romero turns the C.O.W.-Boys on the Turtles as he continues his spell.  Hoping to gain the omniscient power of the Eye, he focuses its energy through the Crystal Shard in the Sacred Cave and back into himself.  By doing so, he alerts Moo Mesa mystic Jose Rey. 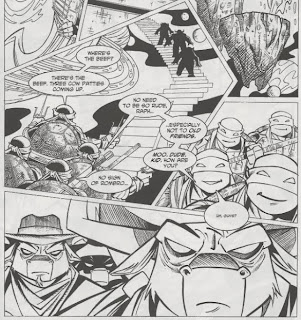 Tsou attempts to undo Romero’s spell on the C.O.W.-Boys, but Romero interferes, transferring the spell to the Turtles.  Now the C.O.W.-Boys are free, but find themselves under attack from the mind-controlled Turtles.  As the battle rages on, Splinter and Jose Rey show up and attempt to sort out the brawl.  Romero brushes them aside and completes his spell, refocusing all the energy of the Eye of Aga-Moo-Tou into himself.  There’s a bright flash and then the three mystics (Tsou, Splinter and Rey) decide they’re satisfied with the outcome.

Tsou frees the Turtles from their mind control.  The C.O.W.-Boys feel like they missed something and ask where Romero went.  Tsou explains that when Romero merged with the Eye, his feeble brain was incapable of handling complete multiversal omniscience.  The experience broke Romero’s mind, rendering him an inert husk.  He was then absorbed into the Eye of Aga-Moo-Tou, where he will remain forever. 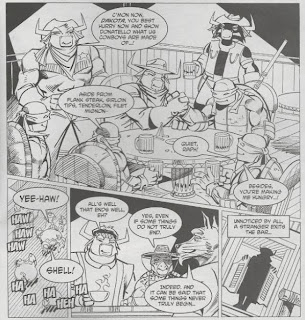 Epilogue: At the Tumbleweed Saloon, the Turtles and the C.O.W.-Boys enjoy some drinks and shenanigans before parting ways.  The three mystics, meanwhile, discuss the concept of beginnings and endings over a pot of tea.  Unnoticed by anyone, a stranger exits the saloon, chuckling to himself that all things must inevitably end.  As the anthropomorphic cow mounts his horse, his coat opens up revealing… an Utrom?

*In that first C.O.W.-Boys encounter, the Turtles were rather young and still able to be grounded by Splinter.  Due to the presence of Savanti Romero and this being their final encounter with him, this story has to take place some years later.  Personally, I stick it in the Mirage “Volume 3” era.

*The Turtles last encountered Savanti Romero in TMNT (Vol. 1) #47.  To date, this is Romero’s final appearance.

*Tsou-T'an-Jin will be mentioned in Raphael: Bad Moon Rising #1.
*The opening editorial cartoon was drawn by Diego Jourdan with words by Steve Murphy (it’s just him sitting in an outhouse shouting Dr. Strange pastiches to himself).

*The credits for this issue mistakenly omit Jim Webb’s credit for the frontispiece.  His credit and an apology were published in the opening editorial of Tales of the TMNT (Vol. 2) #33.

*There are 2 versions of this issue: The regular retail edition and a variant exclusive for the Wayne Center for the Arts in Ohio.  The Wayne Center variant was limited to 500 copies and featured a new cover by Andres Ponce, Ryan Brown and Steve Lavigne.  The issue also included a different opening editorial on the interior cover, explaining the purpose of the Wayne Center.  Other than that, the two versions of the issue are identical.

This second Wild West C.O.W.-Boys of Moo Mesa crossover was quite a bit more tolerable than the first.  It doesn’t suffer from being quite as rushed, even if it’s only a few pages longer.  I think what helps is that Murphy uses familiarity to his advantage to skip past the establishing stages.  Lousy as it was, the first chapter in the Moo Mesa arc at least got the two franchise characters familiar with each other.  Likewise, the inclusion of classic TMNT villain Savanti Romero eliminates any need to setup a new bad guy and explain their background or motivations.

All that being said, it still isn’t a particularly good story.  While Terrorbull in the first part was out to steal gold and jewels, Romero is out to steal Ultimate Power and they both commit the larceny in similar smash-and-grab fashion.  Yeah, the conflict in this chapter isn’t as smalltime as the conflict in the first, but the execution isn’t a whole heck of a lot better.

Fulfilling a crossover cliché the first chapter avoided, the TMNT and the C.O.W.-Boys engage in a gratuitous fight.  It’s a cliché, yeah, but one I can get over; if you’re going to have characters meet each other, folks are going to want to see them fight.  The disappointment instead comes from the fact that in both variations of the battle, the non-mind-controlled side pulls their punches.  You know, the whole “we don’t want to hurt our friends” deal.  So it’s a whole lot of characters just standing around getting punched as they make horrible, horrible cow puns and whine that they can’t fight back.

As for Romero, he’s as comically dense as ever, which leaves me conflicted about the resolution.  I like Romero as a bumbling oaf with incredible power as it makes him one of the more amusing recurring antagonists in the series.  So the fact that he defeats himself at the end by underestimating the power of the Eye is entirely fitting.  The problem with that though is… the villain defeats himself.  The Turtles and the C.O.W.-Boys could have both just stayed at home and slept in and the story would have ended the exact same way.  They contributed nothing to the resolution.  It makes the whole story feel rather pointless, doesn’t it?

Grade: D+ (as in, “Don’t expect me to name all those Moo Mesa characters on page 6, because beyond Saddle Sore and Boothill Buzzard, I don’t know any of them”.)
Posted by TMNT Entity at 7:57 PM