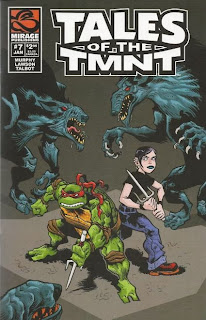 Frontispiece:  In her bedroom, Shadow finds a diary she kept when she was a rebellious, rude teenager.  She’s embarrassed by her bad attitude and frightened by how much she’s forgotten about herself in such a short a span of time.  What frightens her more, however, are her memories of Sloane and Lilith, which resurface whenever the moon is full… 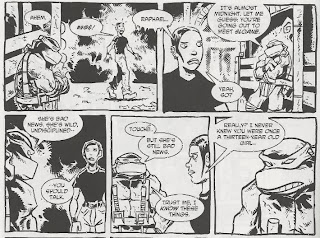 Down in the sewer lair, Shadow is watching a music video from her favorite artist, Lilith, who sings about female empowerment and supernatural gimmicks.  As 11:30pm rolls around, Shadow sneaks out of the lair and meet up with her friend, Sloane, for a Lilith concert.  She’s caught in the sewer tunnels by Raphael, however, and forced back to the lair.  At about Midnight, while Raph is in the shower, Shadow successfully sneaks out.  Raph finds the dummy under the sheets in her bed and goes out after her, only briefly stopping to tell Splinter what he’s doing.

On a street corner, Shadow meets up with Sloane and they head into the backdoor of a dingy club.  There are hundreds of teenage girls gathered in the club, as it’s a female-only event; even the security crew is made up of women.  Raph tracks Shadow down and hides in the rafters as Lilith takes center stage.  Lilith begins one of her songs as security locks the doors.  Lilith then produces a pair of knives, slitting her wrists and filling a goblet with blood.  The goblet is passed around the girls, who seem to be in a trance from Lilith’s singing.  As the goblet nears Shadow, a skylight opens up, revealing a full moon.  The girls summarily transform into werewolves. 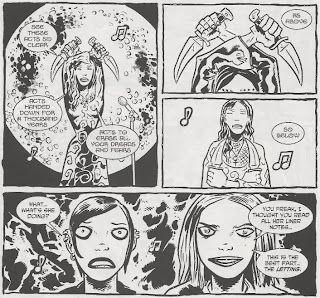 Having seen enough, Raph drops down from the rafters and the commotion he causes snaps Shadow out of her trance (moments before sipping from the goblet).  The other girls woken from their trance all flee the club, dialing 911 on their cell phones as they escape.  Lilith (now a werewolf, too), enraged at Raph and Shadow for ruining her ceremony, orders all her new minions to kill them.  Raph passes Shadow a sai and the pair start (non-fatally) stabbing their way through the monsters.  A werewolf crashes into Shadow in the chaos, pushing her forward with her sai.  She accidentally stabs a werewolf in the gut, who transforms back to her human form: Sloane. 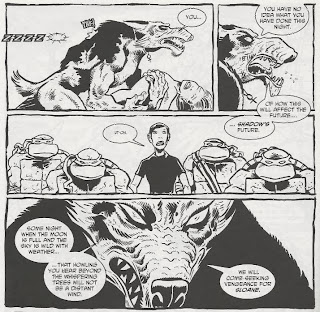 With one of their number dead, the werewolves rally and swarm Raph and Shadow.  Luckily, the other three Turtles show up just in the nick of time.  Leo says Splinter woke them up, fearing trouble, and they followed.  As the fight continues, the police finally show up.  Raph nails Lilith in the back as she attempts to escape with Sloane’s body.  Lilith tells both Raph and Shadow that one day she will return for revenge.  Both the Turtles and the werewolves then vanish before the cops can enter the building.

Epilogue: Shadow remembers how that little adventure marked the end of her tenure in New York City.  April and Casey returned early from their vacation and forced her to move to the farmhouse and Northampton where it would be safer.  She resented them for it and resented Splinter, who was left there as her guardian.  She hated the Podunk town and everything about her situation.  Eventually, she outgrew her childish rebel phase and came to love the place.  However, she never stopped being afraid when the moon was full.

*As Shadow says she’s undergone martial arts training, that places this story shortly after (the epilogue of) Tales of the TMNT (Vol. 2) #69.

*Raph previously encountered a werewolf in Talbot’s short, “The Howl”.

*A stuffed toy of Fluffy from Michael Dooney’s “Gizmo” comic can be seen in the frontispiece.

*According to Steve Murphy in the letters page, the “Forever War” miniseries was slated for a 2005 release date.  Yeah, no, that didn’t happen.

*Also according to the letters page, Splinter’s favorite DEVO song is “Beautiful World”.  Take that knowledge with you to your grave.

“Darkness Weaves” is an interesting study on the character of Shadow Jones.  Chronologically, it’s our first extended look at her as a teenager and it’s quite a change from when she was the adorable little tyke.  The frontispiece strategically takes the edge off, as a five-years-older Shadow remarks about how awful she was during her rebellious teenage goth years.  In that manner, the character in the book agrees with the reader, rolling her eyes as Shadow lays her bad attitude on thick, and keeps you from developing a dislike for her, as you know she’ll eventually outgrow it.  It’s one of the better examples of setup in Steve Murphy’s case as well as one of the few times the frontispiece is actually meant to tie-into the following story (along with the epilogue narration, it creates a bookending sequence).

“Darkness Weaves”, ostensibly a standalone adventure, was retroactively sewn into a larger tapestry of stories, both to positive and ill effect.  The negative half is that it spun off into the truly awful 4-issue miniseries, “Bad Moon Rising”.  I’m not looking forward to reviewing those.  On the positive side, it actually works as a superb follow-up to Dan Berger’s tale, “Dark Shadows”.  That story also features an older Shadow reflecting on her youthful behavior with both embarrassment and wistful nostalgia, and as a story set in the distant future, focuses on her ultimate falling out with Raphael.  It ends with a bittersweet epilogue, as contemporary-Raph learns about this fate and chooses to train teenage-Shadow in martial arts, even though he knows it won’t change things.

If you go directly from “Dark Shadows” into “Darkness Weaves”, you get a lot more out of this story.  Suddenly, Raph’s overbearing parental attitude isn’t just droll irony about a former teenage rebel getting a dose of his own medicine, but a more heartbreaking affair, as he’s seen what the future holds for Shadow and desperately wants to keep her safe.  And likewise, working chronologically backward in a way, as a reader you’ve just witnessed the tragic end of Raph and Shadow’s relationship, and NOW you’re bearing witness to all their bonding and friendship.  For those reasons, “Darkness Weaves” is the perfect story to read directly after “Dark Shadows”.

But as a story on its own?  Eh, it’s not so good.  The story amounts to a cult leader luring girls to join her werewolf army and it all ends pretty quickly.  There is a LOT of singing in this issue and for a printed medium that’s a problem.  Murphy lays the lyrics out as poetry, but with the lack of a beat it can be difficult to keep the rhythm going in your head.  “Music” in comics is best utilized in small doses; an entire issue filled with the stuff is just a pain in the ass.

Also, the lyrics sucked, but I won’t hold that against the comic.  Raphael pretty much covered it:

Anyhow, “Darkness Weaves” is the perfect follow-up to a great story and the unfortunate prelude to a terrible miniseries.  When taken all on its own, it doesn’t stand out particularly well, either.  I will say, though, that Talbot’s inking in this was great and one of the better examples of how well he and Lawson go together.

Grade: C (as in, “Can’t say I listened to very good music when I was a teenager, either.  It was the era of Kid Rock and Limp Bizkit.”)
Posted by TMNT Entity at 10:55 AM