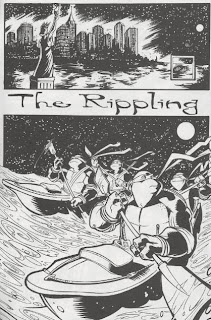 In New York Harbor near Liberty Island, the Turtles are out kayaking.  Mikey is distracted by a weird glow he sees beneath the surface of the water and dives down to investigate.  He follows the glow to an underwater cave and finds that it’s coming from a huge egg.  Mikey reaches out to grab the egg. 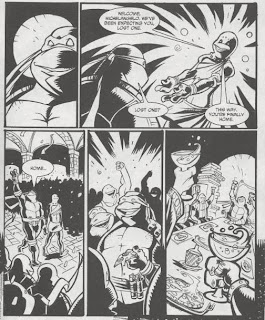 Suddenly, he finds himself in a dry cave.  He takes a stroll and enters a subterranean city populated by anthropomorphic turtles.  A female turtle, addressing Mikey as the “Lost One”, tells him that he has finally come home.  Mikey is welcomed by a parade and proceeds to party and feast.

Back on the surface, the other Turtles are getting worried, as Mikey has been under way too long.  Raph and Leo dive down to find him.  Leo spots Mikey floating unconscious in the cave and grabs him.  Raph is about to follow Leo when he notices something glowing in the cave.  He investigates and finds the glow is coming from a skull.  The glow illuminates the cave, revealing thousands of dead bodies.  Raph panics and swims back to the surface. 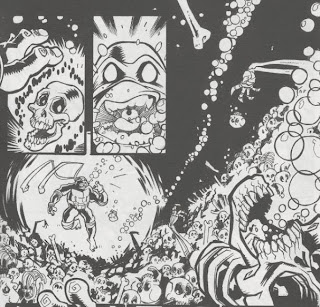 Upon surfacing, Raph sees all of New York has been destroyed and the island of Manhattan flooded.  Before he can figure things out, a shark fin begins surging his way.  It’s not a shark, though, but a humongous, monstrous fish that swallows Raph in a single gulp.

Raph awakens with a slap to the face from Don, who has rescued him from the cave.  Both Mike and Raph relate their stories to Leo and Don, though neither can agree on the source of the glow.  Leo decides to meditate and clear his mind before going to see for himself.

Diving down to the cave, he sees that the glow is coming from a Conquistador helmet.  Leo touches the helmet and a vision is projected into his mind.  He sees the priest of an ancient civilization punishing a Conquistador for his many evils.  The priest binds the Conquistador’s soul to his helmet for all eternity.  The voice of the Conquistador then speaks to Leo, begging to be destroyed.  Leo draws his katana and destroys the helmet.  There’s a minor explosion and Leo resurfaces.

Leo tells his brothers what happened; that the cursed helmet made those who touched it see their innermost longings and revel in them until they drowned.  Don suggests that perhaps Leo didn’t actually destroy the helmet and that it might not have been a helmet at all; that whatever it was may have made Leo think he destroyed it because that was his innermost longing.  Leo brushes off the suggestion, claiming that the object is no longer a threat, whatever the case. 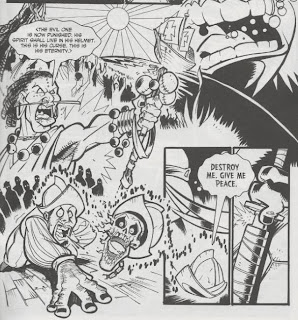 Later, off the coast of Ethiopia, a trio of fishermen worry that if they don’t catch something soon, their village will starve.  One of the fishermen, wearing a cross around his neck, notices a glow beneath the waves.  He dives down and finds a large cross jutting out of the seabed.  He touches it and suddenly finds himself surrounded by schools of fish…

*Personally, I would place this story during the “Mirage Volume 3” era of the series, but it could really take place almost anywhere.

This story was slightly reminiscent of an old short published in Quest for Dreams Lost #1.  It had similar trappings: the Turtles dive down beneath the water to find a mystical artifact and are troubled by horrible monsters.  But beyond those superficial similarities, the two stories hold nothing else in common and “The Rippling” is far and away the better of the two.

At 14 pages, “The Rippling” is pretty meaty for what’s considered a short.  It could easily have been expanded another 10 pages and been a full issue, and I somewhat lament that it wasn’t.  I’d like to have seen Don’s vision, at least (he sort of gets the shaft, being the only Turtle not to succumb to the glowing object).

While not especially “deep”, the story illustrates a solid understanding of each Turtle and their innermost desires.  Mike yearns to be accepted by society, Raph would enjoy living in a world of violence, and Leo desperately wants to be the hero who ultimately vanquishes evil to save the day.  It’s a nice crash course in the characters, though again, it would have benefited from being a full issue so we could spend more time in each fantasy.

Aside from making the Turtles look a little on the rotund side, Fernando Pinto offers up some good pencils.  They’re a bit swirly and strange, but that’s entirely fitting of the story and its reality-bending plot device.  At one point, Raph describes the monster that attacks him in his fantasy as “fish-Don”, even though the monster isn’t drawn to look anything like a grotesque version of Donatello.  I wonder if there was some miscommunication between the writers and the artist (with three plotters and two scripters, I can imagine).

Anyhow, if “The Rippling” is guilty of anything, it’s that it deserved to be a full issue.  As a short, though, it’s still satisfying and with a nice twist ending, to boot.