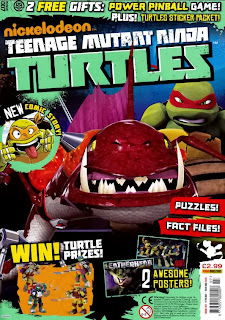 “A Slice of Luck”

At Foot HQ, Fishface tells the Shredder that he has a foolproof scheme to find the Turtles and their sewer lair.  Shredder warns Fishface not to fail him. 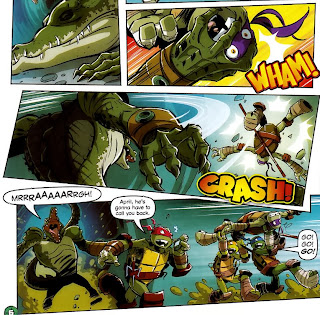 Down in the sewers, the Turtles are taking a shortcut to the pizzeria that happens to cross through Leatherhead’s den.  Knowing he can be grouchy when woken, they decide to cross as quietly as possible.  Suddenly, Don’s T-Phone goes off, waking the alligator.  Leatherhead proceeds to grab Donnie by his face and hurl him against a wall.  The Turtles grab the witless Donnie and escape the rampaging gator as Raph tells April to call back at another time.

Exiting the sewers into an alley, Mike laments that Leatherhead must be so lonely down in his den all by himself.  Raph tells Mikey to get over it because it’s pizza time.  Suddenly, they spot a pizza delivery boy on a scooter being chased by a gang of Foot Soldier bikers led by Fishface. 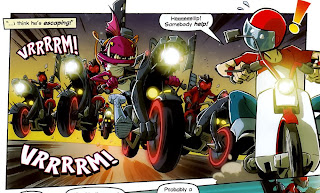 Don fires a grappling hook onto the rear end of one of the bikes and all the Turtles leap onto their skateboards and let themselves get pulled along.  The Foot bikers try to ditch the Turtles and swerve them over to a construction zone, where a plank has been conveniently arranged onto some debris to form a ramp.  The Turtles fly up off the ramp and each land on the back of one of the bikes.

The Turtles easily eject the Foot Soldiers and Fishface from their bikes.  Fishface scampers off, swearing vengeance and the Turtles are pleased with another victory.  The delivery boy thanks them for saving his life, explaining that he saw the Foot robbing a store and they wanted to kill him before he could snitch to the authorities.  He offers the Turtles his stack of pizzas as a token of appreciation; a token they greedily accept.

After the Turtles disappear into the sewers, the delivery boy reconvenes with Fishface.  The delivery boy removes his helmet, revealing himself to be a member of the Foot Clan.  Fishface then produces a device to track the beacon hidden in one of the pizza boxes.

Down in the sewers, the Turtles are all trying to recount their adventure to Master Splinter, but their mouths are full.  Mikey finally shows up and Raph asks him where he’s been.  Mike says he just got back from delivering his last slice of pizza to the slumbering Leatherhead.  Raph wonders if Leatherhead even likes pizza.  Mikey concedes that maybe the gator would have preferred fish… 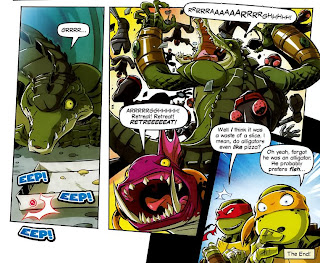 And on that subject, Fishface leads a unit of Foot Soldiers to what he thinks is the sewer lair.  Unfortunately, it’s Leatherhead’s den (as the box Mikey dropped off was the box with the beacon).  Leatherhead, furious at being so rudely awoken, proceeds to trash all the Foot Soldiers as Fishface calls a retreat.

*Obviously, this story has to take place between the episodes “It Came From the Depths” (Leatherhead’s first appearance) and “TCRI” (when Leatherhead is lost in Dimension X).

These Panini stories all wrap up so nicely; they’re just well-structured little stories that set everything up fluidly at the start and pull it all together by the payoff.  They’re not “challenging” stories by any stretch, but they’re very satisfying, especially considering their economical length.

“A Slice of Luck” is no exception and features a nice selection of appearances from popular action figures/characters.  Fishface kind of suffers the same comedic, bumbling end that Dogpound did back in “Daydream”, but again, these Panini comics are pretty short and can only fit in so much material.  Most of the villains are treated more for humor than menace in these comics and I would like to see them presented as genuine threats rather than punchlines, at least every now and again.

Fishface’s plan is pretty solid and at least half of his blundering can be explained away as an act.  The idea of finding the TMNT’s lair by slipping a homing beacon in a pizza delivery box isn’t exactly new, though.  Shredder tried pulling that one in the old Fred Wolf cartoon, in the episode “Pizza by the Shred”.  It worked about as well there as it did here.

Cosmo White returns for another go around on the art duties and it’s all quite good.  Not to disparage Dario Brizuela’s efforts over at IDW’s TMNT New Animated Adventures book, but the Panini artists generally put a lot more kinetic energy into their layouts and break model for effect a bit more freely.  I’m actually beginning to prefer them.  Those motorcycles the Foot Soldiers and Fishface ride are absurd-looking, however.  I wonder, did White design those himself or was he adapting some sort of action figure vehicle toy?  I’d believe the latter.

Anyhow, this has been two issues of the Panini comic in a row without the Kraang.  I’d love to see them go for a hat trick.

Grade: B+ (as in, “But what is Leatherhead’s obsession with Donatello’s face?  It’s quite homely”.)
Posted by TMNT Entity at 11:09 AM