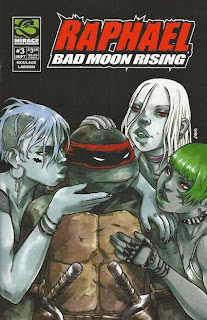 In the penthouse being carried off by the giant barn owl, Raphal and co. (Shadow, Sloane and Lulu) lament their inability to do anything about it.  The giant barn owl is suddenly attacked by an unkindness of giant ravens (I looked that one up!) and it drops the penthouse into the sea.  A giant jellyfish rises from the water and its membrane cushions the impact and forms an airtight bubble around the penthouse.  As it submerges, the jellyfish emits a knockout gas, putting all inside to sleep. 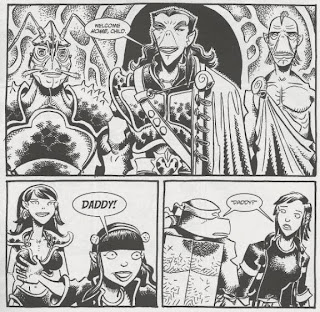 When the group awakens, they’re greeted by a beautiful woman named Oceana.  Lulu recognizes Oceana and realizes that they’re all in her father’s palace.  Lulu’s father, Lord Chiton, welcomes the group to his kingdom of Atlantia.  Inviting the group to a banquet, Lord Chiton vows to use all his resources to track down Lilith and her Pack.  He then offers Raph some sea anemone whiskey and while the Turtle gets shit-faced, Lord Chiton sneaks away from the feast.  He meets up with Sloane in a dark hallway and the two continue in their romantic affair in secret.

Later, Raphael wakes up and finds all his weapons sharpened and ready for him.  Lulu greets Raph, Shadow and Sloane with good news: Lord Chiton’s spies have located where Lilith is being held captive and he is leading an attack to rescue her right now.

On the surface, Lord Chiton and his armies lay siege to an island occupied by a tower.  Lord Chiton calls in his giant horseshoe crabs to begin assaulting the tower with catapult-launched depth-charges. 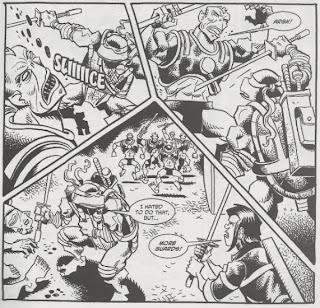 Back in the palace, Raph wants to join in the attack, but the guards won’t let him leave.  With the guards start to get viiolent, Raph draws his sword and slays them.  Reinforcements respond to the noise and Raph and the group flee.  Lulu uses her magic to barricade them in a room, then creates a magic bubble which they use to ride out of the palace and into the ocean. 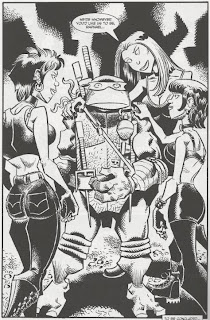 Meanwhile, the bubble surfaces and floats up the backside of the tower to a top floor window.  The bubble pops and the group enters the tower through the window.  Raphael takes point in the search for Lilith, only to fall through a trap door.  Down in the pit, Raph finds himself approached by a trio of beautiful vampire girls, who mesmerize him with their sultry antics.

*Raph and the other Turtles previously encountered vampires in TMNT (Vol. 1) #29.

*The Atlantian warriors dressed in lobster armor bear a passing resemblance to the Malacostra from Casey Jones #1 and Casey Jones #2.  Any actual relationship between them is up to speculation.

*Wait… what?  Last issue, Lulu said that her father was Gnostros, King of the Elves, and that he and Lilith never wed.  In this issue, Lulu’s father is addressed as Lord Chiton, ruler of Atlantia, and he refers to Lilith as his ex-wife.

Jeez, if this comic doesn’t care enough to keep track of itself then I can hardly muster the enthusiasm to do it, myself.

This issue continues with the same shtick as the past installments, with Raph deadpanning complaints about the supernatural and how much he hates it.  His gimmick seems to exist for no other reason than to elicit cheap exposition from other characters so they can explain everything as it happens (for reader benefit, of course).

And on the subject of explaining everything as it happens, this issue is just a mess of that stuff.  Raphael narrates the entire sequence where they’re caught by the jellyfish, describing the images we’re looking at one panel at a time.  His observations are stilted and inane.  Actual dialogue: “Yeah, and now they’re beginning to let out some sort of smoke.  No, not smoke.  Gas.  But… But what kinda gas…?”

You know, I’m sure Lawson could have just drawn the room filling with smoke and the characters falling asleep.  We could have figured the sequence of events out just fine on our own, thanks.

And it’s obvious from one look at Lord Chiton that he’s up to no good, so there really isn’t any suspense to this issue as the villain and conflict are brutally telegraphed (not that subtlety was this comic’s strongpoint, as I’ve previously expressed).  This issue amounts to little more than a whole lot of running around as characters awkwardly and clumsily describe the artwork to us.

And just to prove that Moulage is already fresh out of ideas, this installment ends in very much the same way as the first issue of the miniseries: Raphael getting swarmed by supernatural creatures and hypnotized by their powers, his fate hanging by a thread.

If it weren’t for the Ross Campbell covers, there’d be absolutely nothing redeeming about this miniseries at all.

Grade: F (as in, “For what it’s worth, there’re only 2 pages spent on Raph drinking a beverage in this issue.  That’s an improvement, I guess”.)
Posted by TMNT Entity at 8:24 PM